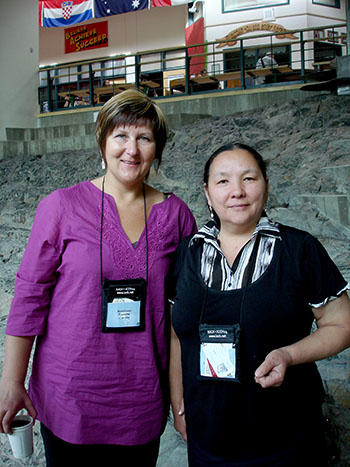 As Russia works towards linking all residents of its northern regions to the internet, online gambling will drain the resources and energy of even more indigenous people, says Dr. Larissa Abryutina (right), a Russian medical researcher and vice-president of the Russian Association of Indigenous Peoples of the North, who is originally from Chukotka. Svetlana Tumilty (left), who works in Iqaluit for the Government of Nunavut’s finance department, interpreted for Abryutina during the International Congress for Circumpolar Health in Yelowknife, which wrapped up July 16. (PHOTO BY JANE GEORGE)

YELLOWKNIFE — Circumpolar peoples maybe be drawn to gambling due to insecurities created by cultural loss and alcohol-related problems during childhood, new research from Greenland suggests.

You can’t understand gambling without looking at a gambler’s childhood, said Christina Larsen, a health researcher from Greenland, during a session at the International Congress for Circumpolar Health in Yellowknife, which wrapped up July 16.

Many may turn to lottery tickets, bingo, card games and slot machines due to childhood trauma and a lack of trust in people, she suggested.

For her research, Larsen looked at about 1,500 Greenlanders over 18. She found three in four had gambled over the past year and many gambled on a weekly basis.

Larsen looked specifically at severe or “pathological” gamblers, whose gambling disrupts personal or family life and work, and found pathological gambling affected about one in 10.

Larsen’s research, which is as yet unpublished, also found that pathological gambling, as an addiction, is extremely hard to overcome.

That’s because this form of gambling has its roots in deep-rooted insecurities, which likely are connected to the transition from a traditional lifestyle to a modern one, she suggested.

An insecure childhood makes it hard for children to form trusting relationships later in life and may encourage them to find solace in gambling or other addictions, she said.

As an example, Larsen offered the story of a Greenlandic woman in treatment for pathological gambling who grew up in a violent household.

“She spent her time protecting her brothers and sisters from the trauma and insecurity it obviously creates. As a grown-up she could not bear the thought of her childhood memories, but she didn’t like to drink. Instead she gambled on slot machines, which made her forget everything, including her children who were often left alone,” Larsen said.

And the same childhood factors also appear to be linked to alcohol abuse, suicide, violence and sexual abuse also turned up as leading to gambling.

Public health programs should address gambling because it affects so many people, she said. About 30 per cent of those who play at least one game do this on a weekly basis, she said.

As for alcohol-related problems, she said these should also be considered when looking at overall health conditions and addictions in Greenland and other Arctic regions like Nunavik, where the Qanuipittaa Inuit health survey found many Nunavimmiut spending up to $4,650 a year on gambling.

Discussion of Larsen’s research at the circumpolar health conference sparked the interest of Dr. Larissa Abryutina, a Russian medical researcher and vice-president of the Russian Association of Indigenous Peoples of the North who is originally from Chukotka.

Russia is now on a national drive to connect all northerners to the internet, Abryutina told Larsen.

Abyrutina said she’s afraid that more people in Russia’s remote regions will soon turn to on-line gambling sites when they have internet access, a form of gambling the Greenlandic research did not look at.