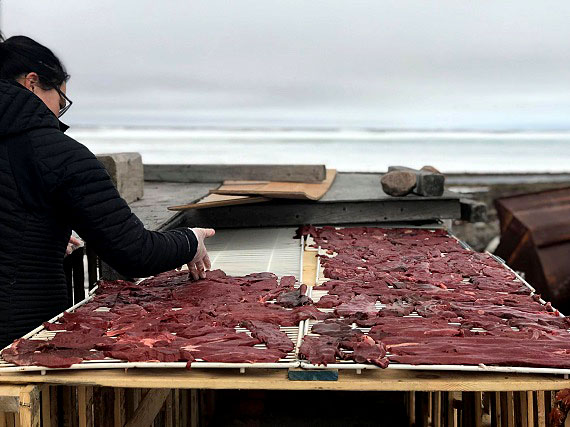 Paris Kaludjak lays out strips of caribou meat to make mikku (dried meat) on a table outside her family’s cabin near Arviat in 2018. A McGill University researcher is looking at the economic value of Nunavut country food. (Photo courtesy of Paris Kaludjak)

Duncan Warltier, a PhD candidate at McGill University, put that question to northerners and northern researchers gathered for a talk on sustainable harvesting at the ArcticNet conference in Halifax on Dec. 2, while presenting the preliminary results of his research project on Nunavut’s local food economy.

His study looked at the nutritional value of country food through the energy and protein it contains. Based on that nutritional value, and using cost data from the Nutrition North program, Warltier estimated a dollar figure for the hunted and harvested foods.

He also used information from the Nunavut Wildlife Management Board to calculate the volume of harvested meat in Nunavut. It showed that 135 kilograms of meat are harvested per Nunavut resident, per year. That equals about 5 million kilograms per year across the territory.

Putting together the value of this food and the volume of it, he concluded that the equivalent of $143 million dollars per year are generated within the local food system.

“This is currently a hidden economy,” Warltier said.

Where this is important, he said, is in recognizing how much local foods, and hunters, contribute. It illustrates the financial impact a loss of local food would have.

If there was no hunting at all in Nunavut, there would be a $143-million food bill to make up, he said.

Warltier looked at the option of replacing a local food, such as Arctic char, with chicken or canned tuna. The protein and caloric value of the store-bought foods fell far below what was hunted locally.

As development projects are considered for the territory, with associated impacts on wildlife, this value could play a role in Inuit impact and benefit agreements.

Similar research, measuring the value of local food has been done, Warltier said. In general, it has valued local food at a much lower level than his own findings, which are based on nutritional value.

As well, he sees his formula as an accessible tool for negotiating. “It might help to allow those systems get entered into policy,” he said.

He used all publicly available data and information to put a price on Nunavut’s food system. Next, he plans to apply this equation in Nunavik.

He said it could be easily replicated by any interested group.

“My hope is to propose an easy, transparent system for valuing local food systems,” he said. “If I could envision a future for this work, it is empowering communities.”