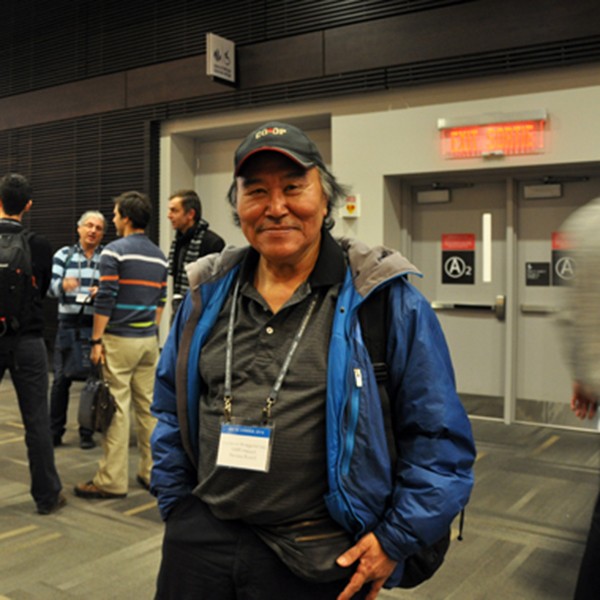 For more than 30 years, Lucassie Arragutainaq has been working to make sure Inuit voices were heard when it came to addressing climate change.

“The Inuit were talking about climate change when it wasn’t even being mentioned in the scientific community,” he said in an interview with Nunatsiaq News this week.

Arragutainaq, from Sanikiluaq, was honoured for his work recently when he was presented the 2022 Northern Science Award at the ArcticNet annual scientific meeting on Dec. 8.

The award from Polar Knowledge Canada, a federal agency, recognizes a person who has made a significant contribution and furthered the public’s understanding of the Canadian north.

Arragutainaq was honoured for his work in Inuit research and environmental stewardship. With the award, he received the Centenary Medal and a $10,000 prize.

Arragutainaq is a long-time community representative who has worked as a co-ordinator with the Nunavik and Eeyou marine impact review boards, as well as the Nunavut Wildlife Management Board.

He also co-edited the Voices from the Bay report, which documented traditional ecological knowledge of the Inuit and Cree in the Hudson Bay bio-region, while he was chairperson of the Sanikiluaq Hunters and Trappers Association.

Reflecting on his work in documenting climate change and contributing to research, Arragutainaq said he wanted to help share Inuit knowledge, so much of which has been passed across generations verbally.

“I wanted to break [the knowledge] down, get anybody or government interested and wanted to help better believe [Inuit],” he said.

In a news release, Polar Knowledge Canada noted Arragutainaq has been an active participant in scientific studies of the changing environment of Hudson Bay.

He has documented Indigenous ecological knowledge, “influencing the course of research in the region and bringing community voices and priorities to the forefront.”

“Mr. Arragutainaq has worked tirelessly for the benefit of Northerners and Indigenous People and the wildlife on which they depend,” the release noted.

“Through his leadership, experience, and expert facilitation of community-driven research, he has been a mentor and an inspiration to young researchers and many others who have worked with him.”