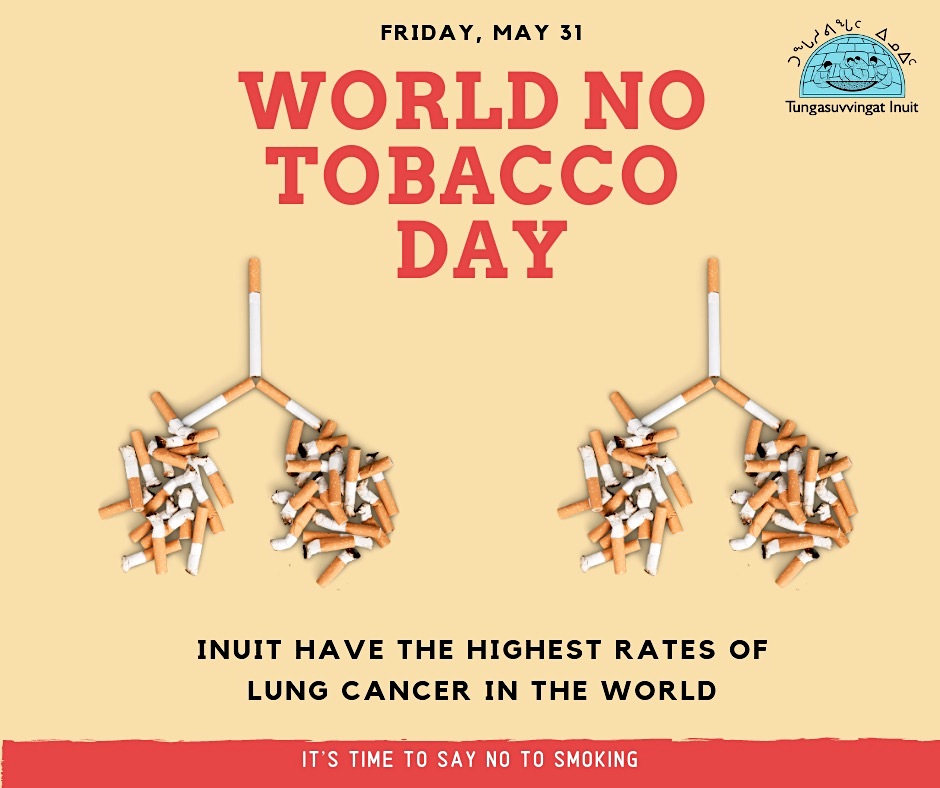 This poster from Tunngasuvingat Inuit urges participation in World No Tobacco Day. If everyone in Nunavut didn’t smoke on Friday, May 31, it would mean roughly 160,000 cigarettes would not be lit in the territory that day.

If all the smokers in Nunavut gave up cigarettes today, May 31, on World No Tobacco Day, about 160,000 fewer cigarettes would be smoked in the territory that day.

In 2017-18, more than 59 million cigarettes were sold in Nunavut, more than in any previous year.

That number increased slightly (0.34 per cent) over the previous fiscal year, according to the Chief Medical Officer of Health’s 2017-18 Tobacco Control Act Annual Report.

This is despite a tax increase of five cents per cigarette introduced in March 2017 to reduce consumption.

So high tobacco use in Nunavut remains “a pressing concern” for Nunavut’s Health Department, the report said.

In 2016, only 16.9 per cent of Canadians aged 12 or older residing in the provinces identified as smokers, whereas 74 per cent of Nunavummiut aged 16 or older years, that is, about three in four, reported smoking, the report states.

But, with the continued increase in cigarette sales, addressing tobacco use and minimizing its adverse outcomes is still a departmental priority, the Health Department said.

Those outcomes include an increased risk of getting tuberculosis, which is higher in Nunavut than anywhere else in Canada.

As well, the Canadian Cancer Society revealed in 2013 that the incidence of lung cancer among Nunavut’s Inuit is higher than most other populations in the world.

The report said smoking is a significant cause of the disease.

But if you live in Nunavut and want to stop smoking, you can get support.

Replacement therapy products like the nicotine patch, gum and inhaler are available for free at local health centres or the pharmacy.

All Nunavut Inuit can go to any pharmacy in the territory and ask the pharmacist for two weeks of free nicotine-replacement products. The pharmacist will first ask a couple of questions about how much they smoke, to find out which product is best. That could be gum, lozenges, inhalers or an under-the-tongue spray with different doses.

When it comes to any non-Inuit looking to quit smoking in Nunavut, they can also get free products, but only at the public health office or medical centre.

The Department of Health also suggests speaking with a local health care provider or calling the Nunavut QuitLine at 1-866-368-7848 for advice on kicking the habit.