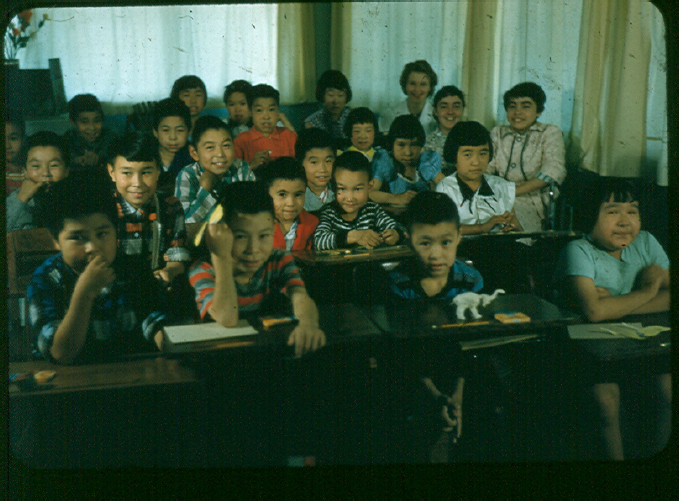 Inuit children with tuberculosis are seen in school at the Mountain Sanatorium in Hamilton, Ontario. They were among the many Inuit removed from their communities between the 1940s and 1960s to receive TB treatment. (Johanna Rabinowitz Collection, Archives of Hamilton Health Sciences Corporation and the Faculty of Health Sciences, McMaster University.)

After last week’s long-awaited federal apology to Inuit for historical trauma the Canadian government caused in its treatment of Inuit with tuberculosis between the 1940s and 1960s, the Nanilavut project officially began.

The database went live on Friday, March 8. By Wednesday, March 13, a first gravesite was found through the initiative.

Any Inuit seeking help to locate the burial sites of their lost loved ones who never returned after leaving for TB treatment during those years can contact Nunavut Tunngavik Inc. or the regional centre where they are a beneficiary.

Once a gravesite has been found, NTI will arrange travel for two family members and provide a grave marker for the site.

Officials from Inuit Tapiriit Kanatami say these trips will likely be scheduled once the snow has melted so that gravesites are more accessible. Some have plaques already but some may need one.

In addition, the Inuit organization has set up mental health resources for those who participate and need support. Mental health workers from Ilisaqsivik, Pulaarvik Kablue and Cambridge Bay Wellness Centre are involved.

The Nanilavut project has been planned and organized since 2010.

The federal government announced $27.5 million in funding over five years to support an Inuit-specific approach to tuberculosis elimination. This includes funding for enhanced prevention, screening, diagnosis and treatment of TB and latent TB infection.

However, the Nanilavut project is a different initiative and, according to Crown-Indigenous Relations and Northern Affairs Canada, “the exact funding figures for this recently launched initiative are not yet available.”

CIRNAC has confirmed to Nunatsiaq News that federal funding for Nanilavut “is and will be provided to the four land claims organizations for the range of supports for families and Inuit communities.” This funding will go toward project managers for Nanilavut, regional and community-based events and monuments across Inuit Nunangat, travel support, enhancements to gravesites, as well as health support and tuberculosis awareness.

Since 2010, a working group has been researching and inputting data and hospital records into a database.

The database will be added to as new information becomes available.

According to ITK, family members can still submit records and information to add to the database now.

The current count is about 9,000 named records in the database. But these records may include some duplicates with different spellings of the same name or refer to the same person with a different name, officials at ITK explained.

Now, project managers have been hired at nearly all of the regional centres, says Shirley Dagg, project coordinator for Nanilavut at Inuit Tapiriit Kanatami.

She has been working on the file since January 2018.

Anyone interested can submit an inquiry form, which Nanilavut staff will use to verify those who register are related to the person whose information they are seeking.

Then they fill out a consent form.

Family members cannot access the database themselves. Only the Nanilavut project managers will have access to it, in order to ensure confidentiality.

Dagg says the search process can take anywhere from one week to four weeks after someone contacts the regional organization. This can be done in person, by phone or by fax.

“Once the project manager completes the search they will provide the information for the person,” said Dagg.

Still, Dagg knows this project is an important step to many Inuit across the country and encourages anyone with questions about family members who never came home to contact their regional organizations.

Inuit who are living in urban centres like Montreal, Ottawa or Winnipeg can also get help to seek answers and closure with Nanilavut.

Any Inuit in Canada can call the office of the region where they are a beneficiary to seek answers.

“It’s a dark part of Canada’s history, but it is a first step to begin the healing process to put closure to the dark memories,” Dagg said.