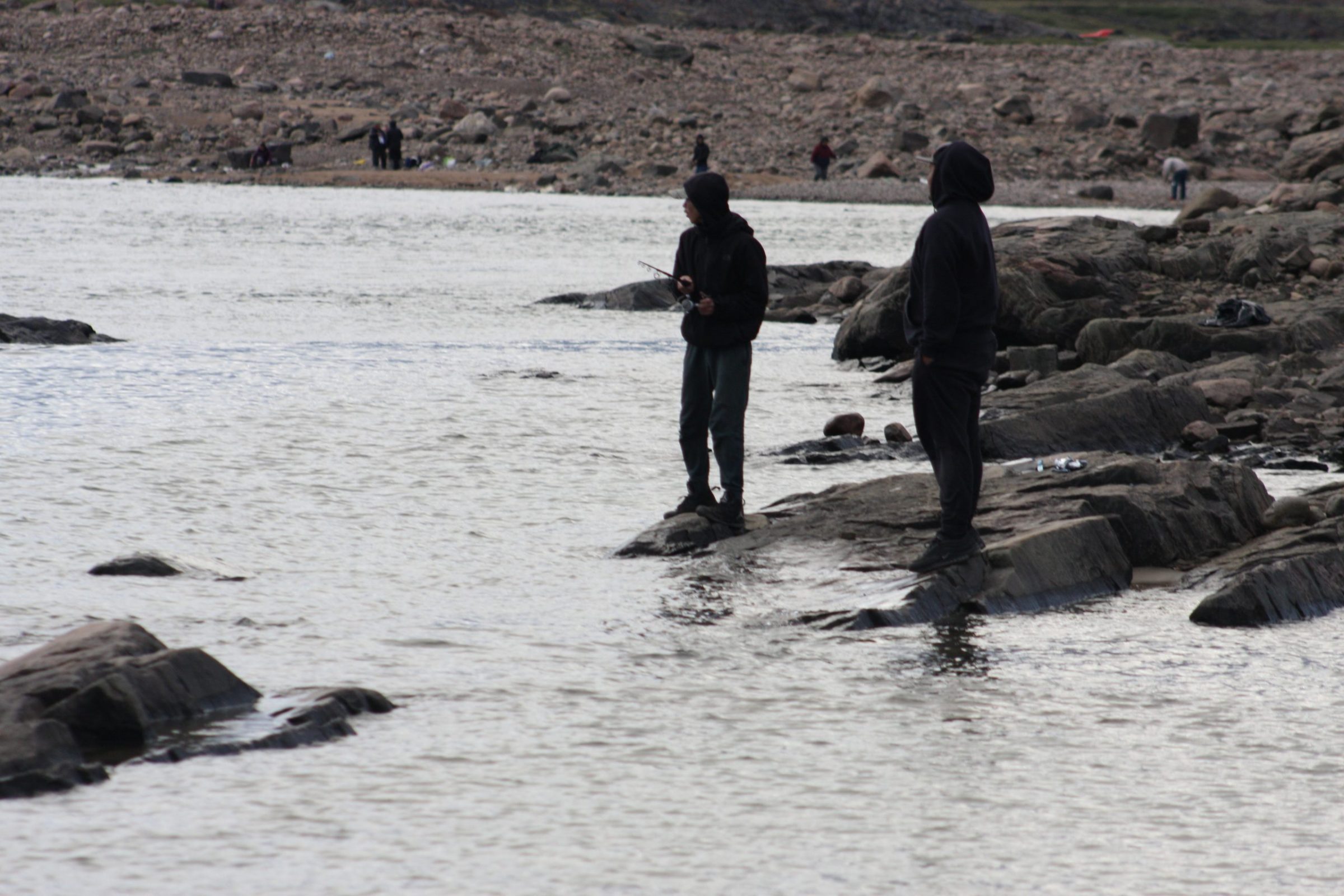 Two unidentified men fish at the Sylvia Grinnell River in August 2021. With Nunavut Day around the corner, Nunatsiaq News is inviting readers to tell others about the corners of the territory that make their land special to them. (Photo by Corey Larocque)

My introduction to Nunavut occurred last year — mid-pandemic, not long after the Iqaluit outbreak ended and just after the isolation hub requirement relaxed for travellers coming into the territory.

It was a hard time to begin getting to know a new place and to try to understand its people and their history.

People were still keeping their distance. Stores were closed. Restaurants were takeout only.

But two weeks after arriving, I tried my luck at fishing in Sylvia Grinnell Park, downriver from the waterfall. When I got the job as managing editor of this paper, my dream turned to catching my own Arctic char. Sadly, that dream remains unrealized, though not for lack of trying.

Coming back from that attempt to land a char on a grey day last August, there was a spot near the top of the hill — with the river at my back and the airport straight ahead and the Iqaluit cityscape in the distance. I could no longer hear the roar of the river and instead heard only silence, interrupted by the occasional call of a passing raven.

It was a warm summer Sunday afternoon — about 14 C, and a breeze tussled the purple saxifrage that dotted the park’s landscape, making it the only moving thing on the rugged, rocky horizon.

That’s when I started to get an inkling, on a very superficial level, why so many Nunavummiut have such deep and abiding love for their land.

No matter who you are or where you came from, most people have a point where they feel they start to understand a place. For Inuit, the understanding of what they call “Our Land” is innate. For other Nunavummiut, and qallunaat from Ontario, it’s learned.

Since Nunavut Day is a time for reflecting on what the land means, Nunatsiaq News wants its readers to share their thoughts on what the land means to them. We’re inviting you to submit articles of up to 250 words, telling other people throughout the territory and across Canada what’s important to you about your land.

It could be the comfort that comes from being on the land; the taste of mattaq; the laughter of children learning how to throat sing or rediscovering a lost language.

In the days leading up to Nunavut Day — July 9 — we will publish those articles under the heading, “My Corner of Our Land.”

Every writer who submits an article that gets published will be entered in a draw for one of three $500 gift cards to Northern or Arctic Co-op stores.

Please email submissions to editors@nunatsiaq.com by July 4 with the subject line “My Corner of Our Land” for them to be considered for publication. Include a phone number for the writer.

Also, please include a photograph (a selfie is fine) of the person who wrote the article and feel free to include a picture of whatever is written about. A nice, closeup picture of the author on the land that they love would be great, too.