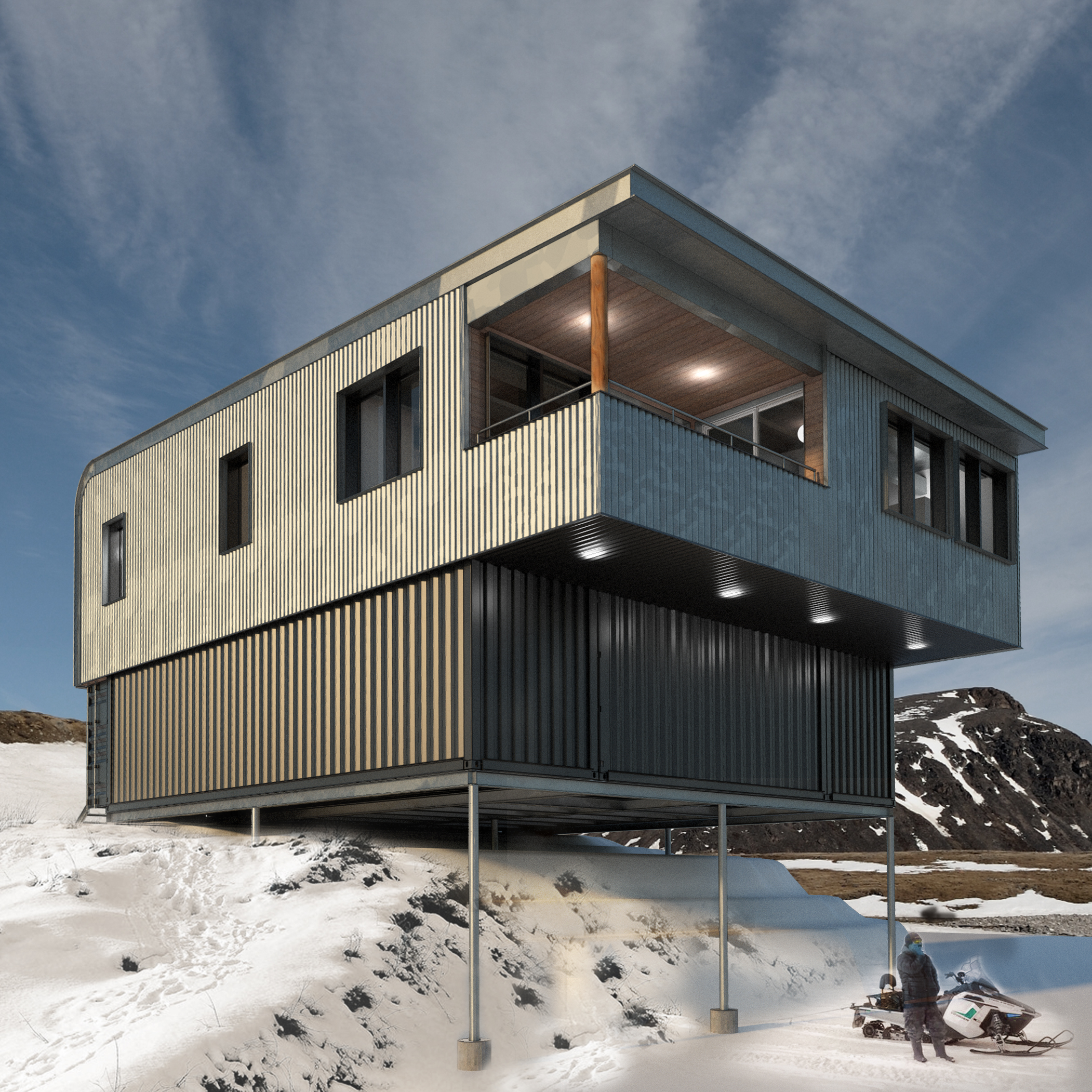 Shipping containers are a part of the landscape in Nunavut. Now, a local resident and an industrial designer have teamed up to craft a home from them. (Image courtesy of Javid Jah, Wonder Inc.)

“We have to be one of many, many people who are taking part in solving the current housing problem”

When Alex Cook of Baker Lake began thinking about building a home for himself, he knew he wanted something that was novel and purpose-built for the North.

Nearly two years later, those ideas have been incorporated into a project called Qammaq, a prototype that will take the form of a three-bedroom house partially built with shipping containers in Cook’s hometown of Baker Lake.

To design the structure, Cook partnered with Jason Halter, an industrial designer and owner of Wonder Inc., whose work with shipping container structures can be found everywhere from New Orleans, Louisiana, to Hamilton, Ontario.

The duo chose shipping containers because they provide an added level of efficiency over the conventional way of building homes in the North.

Construction supplies for conventional homes are shipped north in containers, which are then discarded.

Halter and Cook intend to ship construction supplies north in containers and then use them as part of the construction, essentially, a home in a box.

While this satisfies one of Cook’s main goals of the project, namely, to reduce the overall environmental footprint by creating as little waste as possible, using the container as part of the construction also means that shipping container homes can be built much faster than regular homes.

According to Halter, it can take between 12 and 14 months to construct a custom single-family home in the south, whereas a container home takes between three and four months.

Halter and Cook both see these benefits, speed and efficiency, as being key to solving Nunavut’s housing shortage.

“A house purpose-built for the North”

While designing a container home for the Arctic comes with its own unique technical challenges, the pair also sought to challenge the functionality of the design, asking themselves questions like “what can we do to make a house purpose-built for the North,” said Cook.

Part of the answer to that question comes in the form of the building’s first floor. It encompasses a large garage, as well as a multi-purpose space that Cook says could play any number of roles, from providing space for butchering meat to serving as a small mechanic shop.

The remainder of the ground floor, which is the part of the home built from shipping containers, offers an entryway to the upstairs living quarters, provides storage space and houses the building’s mechanical elements.

The upstairs part of the home, although clad in metal on the outside, is constructed out of structural insulated panels, which Halter describes as a spray-foam core sandwiched between two pieces of material, typically plywood.

These prefabricated panels also aid in the speedier construction process.

In addition to its three bedrooms, the upstairs contains an open-concept space that can accommodate larger, multigenerational gatherings.

“The idea is that if there’s 12 to 20 people in a room, you have to have the mechanical system that’s able to handle that,” said Halter, referring to air-handling and dehumidification systems. 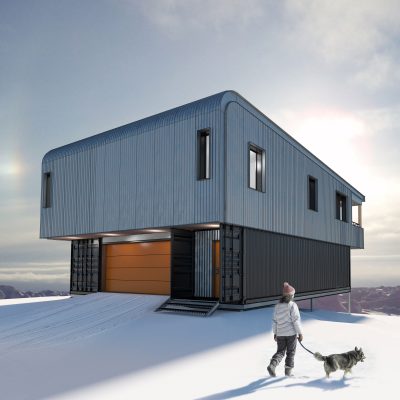 While the bottom of the home is constructed from shipping containers, the top portion of the house will be made out of structurally insulated panels. (Image courtesy of Javid Jah, Wonder Inc.)

When it comes to the house’s price, Halter says it’s equivalent to what a typical residence in Nunavut would be.

While the price may be similar, Halter hopes that container homes such as the Qammaq project will last longer than conventionally built homes, saving money in the long-term.

One of the other benefits of their design that is intended to save money is the building’s energy efficiency.

“It costs a little more because of your extra 10 to 20 percent in insulation, technology, or approach to building … [and] is slightly predicated on something lasting longer and being built of good materials,” said Halter.

Aside from interior cost-saving and energy-efficient design, the house will also feature a number of rooftop solar panels for the North’s solar energy–producing months, which Halter says will have the ability to send power back into the grid if there’s a surplus.

While the current project takes the form of a single-family home, containers can be configured to suit any number of different housing needs, from tiny studio dwellings to complete townhouse complexes.

Containers can also be used for non-housing structures as well, from commercial spaces to community centres.

Although Cook and Halter’s current focus is on this initial home, they alluded to longer-term plans, including a public housing project and a commercial space.

One of the benefits of using containers is that their construction can become a simple, repeatable process.

“That’s literally how we design and put them together.”

For the current project, Halter estimates that between 50 and 80 per cent of the work on the house will be done in the south.

Part of the reason for this stems from Cook and Halter’s desire to improve the building process in a way that reduces overall labour costs, which Cook said is “one of the driving factors of the astronomical prices of housing in the North.”

The other factor is that, according to Cook, much of that is work that wouldn’t happen in the North anyway.

“We’re talking about custom container modification that has to happen before we get to the port,” he said.

“Unfortunately, it’s not possible to fabricate something like that, we just don’t have the resources in Nunavut.”

But that doesn’t mean that northern labour wouldn’t be used.

Foundation work, structure assembly, exterior cladding, plumbing, wiring and interior finishing are all things that will be done in Baker Lake, said Cook.

With time, the percentage of what’s constructed in Nunavut could change.

“There’s no reason why all of this can’t be done up north,” said Halter.

“It’s not out of the question that we would bring a couple of journeymen to come down to the south to see how it’s done there.”

From there, Halter said all that would be needed would be a prefabricated shop to work in and a truck to be able to move the containers.

While this would still require finishing materials from the south, a requirement that’s no different from the typical construction process, it does also mean that the abundance of sea cans already found across the North could be used to create homes.

Cook and Halter also understand that there’s a greater issue at stake: providing homes in a territory that faces a major housing shortage.

Part of Cook’s initial brainstorming process for his new home drew inspiration from a CBC article he read in September 2018 about how the Nunavut Housing Corp. was appealing to the wider housing industry to help address the territory’s housing crisis.

From there, he eventually reached out to Halter.

“This is a call to arms,” said Halter.

“We have to be one of many, many people who are taking part in solving the current housing problem.”

In part, this is why they’ve opted to pursue this project without government funding.

“Not that government funding is bad, but it’s hard to get it into action,” said Halter, in describing their entrepreneurial approach to the project.

“I’d be thrilled if I built 20 or 30 or 100 of these things and was the first on, first in, but it doesn’t matter. There needs to be 10 or 20 of our kind of companies doing exactly this right now to solve the current [housing] emergency.”

Halter and Cook anticipate that the initial container home in Baker Lake will be constructed and assembled in 2021.

“The real important thing with any of these sorts of proposals or prototypes is to get one on the ground, get it installed, document it, learn from it, and see it happen,” said Halter.

“After that, all kinds of things can happen.”