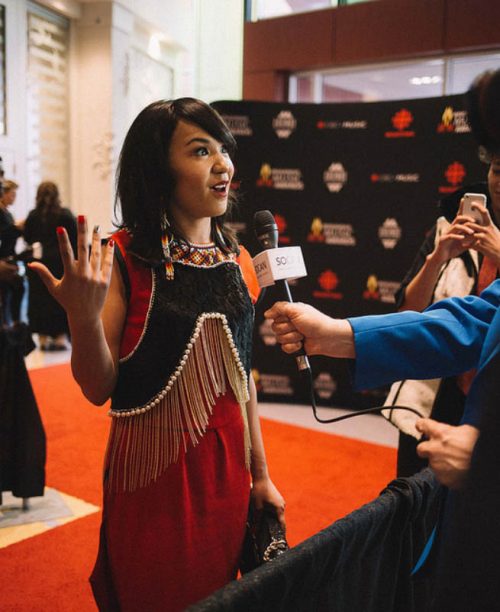 Nunavut artist Kelly Fraser is interviewed at the 2018 Indigenous Music Awards. But the singer-songwriter said she won’t submit any more work to the organization until they address issues of cultural appropriation. (Photo courtesy of IMA)

Should non-Inuit performers be allowed to throat sing?

Throat singing is not a “pan-Indigenous free for all,” says Tanya Tagaq

A group of Inuit artists say they plan to boycott this year’s Indigenous Music Awards over concerns around cultural appropriation.

These Nunavut musicians, including Tanya Tagaq, Kelly Fraser and Kathleen Merritt (Iva), say they won’t participate in this or other awards until the organization that runs the event, the Manito Ahbee Festival, addresses the use of throat singing by a non-Inuk performer.

Cree performer Cikwes experiments with throat singing in some of her work. Her album ISKO is nominated as best folk album at this year’s Indigenous Music Awards, set to be handed out at a May 17 ceremony in Winnipeg.

Inuit artists say throat singing is a uniquely Inuit creation, not to be performed by other groups.

Tagaq, one of Nunavut’s best-known throat singers, said the art form is not a “pan-Indigenous free for all,” in a post on social media.

“Due to issues surrounding cultural appropriation, I will not be performing at, attending, nor submitting my work to the IMAs unless they revise their policies or have Inuit representation on the board for consultation,” Tagaq tweeted on March 31.

Other performers have since followed suit, demanding the music awards rescind Cikwes’ nomination.

Both Kelly Fraser and Iva said they will no longer submit their work or agree to perform at the music awards until the organization addresses their concerns.

Until the board of Governors addresses issues around #CulturalAppropriation and has Inuit representation/consultation within their organization, I will not support, submit any work to, or perform for the @IMAs https://t.co/U4C7JWIUND

Nunavut-born, Yellowknife-based throat-singing duo Piqsiq pulled their album, which was nominated this year for the IMA’s best electronic album.

“We look forward to submitting future work once our concerns of cultural appropriation are taken seriously and policies are in place to prevent it from happening again,” the group tweeted earlier this week.

A handful of other Inuit artists are nominated for awards this year, including Beatrice Deer, Aasiva and newcomer Angela Amarualik.

For its part, the festival’s board of governors said submissions are judged and selected by a group of music industry voters, who do not disclose their heritage, 39 of whom selected the nominees in the folk album category this year.

Cikwes’ nomination will stand, the organization said in an April 2 news release.

“We don’t presume to agree or disagree on this matter at this time, as it requires great reflection, ceremony and discussions on how we move forward in a good way,” the IMA said in a release.

“We have not dismissed this matter in any capacity. We recognize the importance of building representation and programming that shares common values.”

The organization said it intends to add an Inuit representative to its board of governors at its next AGM, as well as develop a policy on cultural appropriation for all artists submitting to the awards.

Throat singers make sounds imitating sounds in nature, carrying on a rhythm until one person laughs or loses their breath.

Throat singing was discouraged and essentially banned for many decades by Christian missionaries when they arrived in Inuit communities in the early 20th century, but the practice saw a revival in the 1980s.

In 2014, Quebec designated throat singing as a part of the province’s cultural heritage—the first designation of its kind.