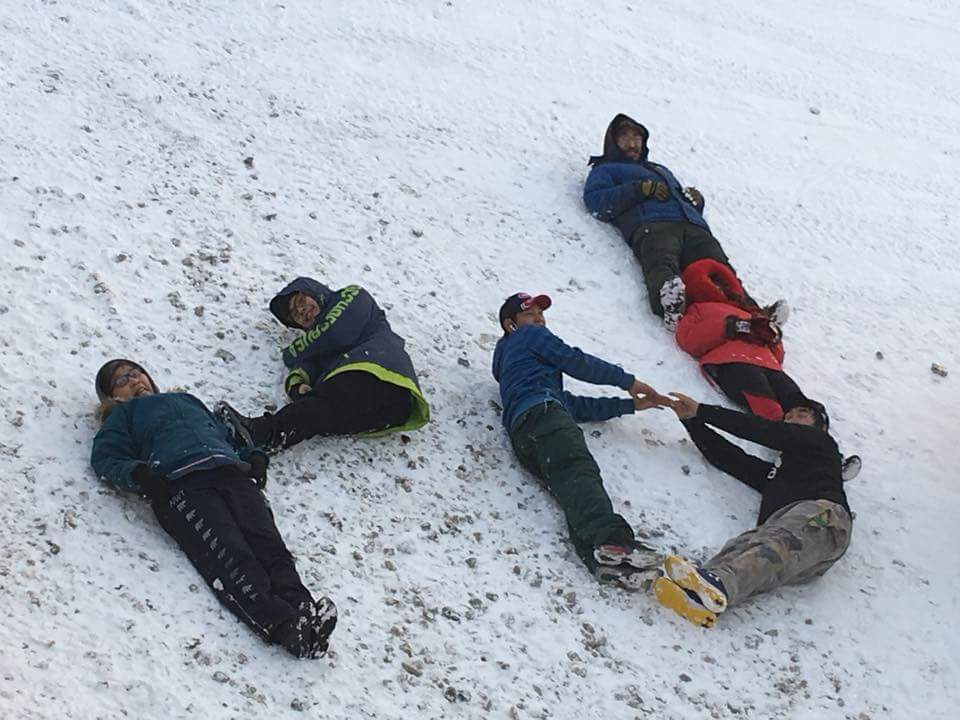 Youth in Gjoa Haven spell out the Inuktitut syllabics for SIKU after a workshop in September 2018. “So awesome to have you involved in helping create SIKU!” said the Arctic Eider Society on Facebook. The society held a presentation on SIKU at the 2019 Inuit Studies Conference earlier this month in Montreal. (Photo courtesy of the Arctic Eider Society/Facebook)

Imagine a smartphone app that told Inuit everything they needed to know before going out on the land, providing weather and tide forecasts, satellite imagery and warnings about dangerous conditions.

Or imagine an app that allowed users to share their observations and stories, conveniently tagged on a map—available online and offline, if you download the maps before leaving internet connectivity—as well as the Inuit version of Wikipedia. Or, maybe, imagine a community feed that lets you know everything that happened in the local area.

SIKU, a project being developed by the Arctic Eider Society, was created to combine all these ideas into a social media platform. It’s “created by Inuit and for Inuit,” Candice Pedersen, a regional coordinator for the project, said during a presentation at the recent Inuit Studies conference in Montreal.

The app, which is built on the society’s previous IK-MAP project, is currently available in a beta version. SIKU is expected to launch in full later this year.

SIKU attracted a lot of attention two years ago after winning a spot in the 2017 Google.org Impact Challenge, which spread $5 million among 10 Canadian charities that had, as described on the competition website, “innovative ideas for a better world.”

Following up on that success, the SIKU team presented at the 2019 Inuit Studies Conference on Friday, Oct. 4.

Inuit suggested a lot of the features of the app when the society reached out for consultation, as well as the project’s guiding principles, Pederson said. In that way, SIKU was co-developed by the communities themselves.

During their Oct. 4 presentation, the society mentioned upcoming workshops in 20 communities, including Umiujaq, Grise Fiord, Naujaat and Arctic Bay.

Facebook was also a major influence. Johnny Kudluarok, director of the Arctic Eider Society, offered “Nunavut hunting stories of the day” as an example. The group gave hunters a space to share information and look at older posts, using information collected over years.

Inuit already use existing social media for Inuit purposes, Kudluarok and Joel Heath, the Executive Director of the Arctic Eider Society, said. So, instead of creating something brand new, the SIKU team wanted to improve on that model and make an Inuit version of Facebook.

“Scientists have often reacted to Inuit knowledge [as] ‘that’s interesting, but you don’t have any data, it’s anecdotal’,” said Heath, describing what commonly happens between hunters and scientists.

Even though a hunter can be out on the land every day, collecting data for years and comparing it with data from other hunters and elders, “scientists will spend five years trying to prove what Inuit already told them was true.”

And unlike other areas of the internet, where someone’s online content can be used without permission, a SIKU user owns their data. People and organizations will need consent before using someone’s content. Not even SIKU or the Arctic Eider Society can compete for content ownership—the society wrote itself out of the privacy policy. SIKU may host a person’s posts, but, like any other organization, the society will need permission to use those posts.

This arrangement helps encourage healthy collaborations, and returns power to Inuit when it comes to Inuit knowledge and experiences.