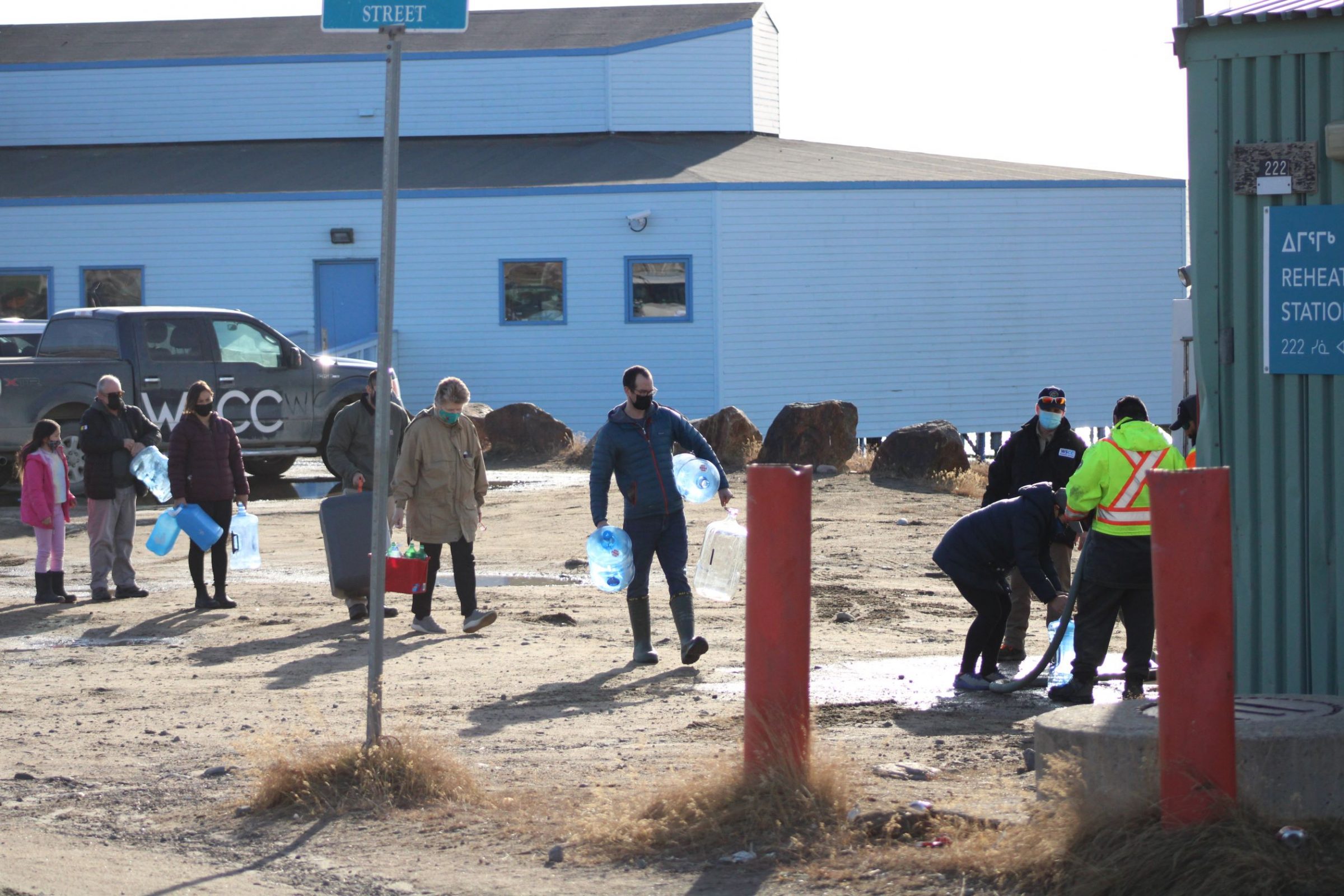 Iqalummiut line up to fill water. Accessing clean drinking water has been a challenge for some residents, following warnings to not drink the tap water due to fuel contamination. (Photo by David Lochead)

During Iqaluit’s water emergency, some Iqaluit residents are struggling to access clean water more than others, following warnings to not drink the tap water due to fuel contamination.

Since the water was declared unsafe to drink on Tuesday, Iqalummiut have been buying bottled water from grocery stores, filling jugs at a station near the library supplied by water trucks hauling water from the Sylvia Grinnell River and driving to the river themselves.

But not everyone can afford bottled water, which can cost as much as $6 for a litre and a half. Nor is everyone able to collect water from the river themselves.

Geneva Amarualik said bottled water is too expensive to be an option. The challenge with getting water from the filling station at the library or going to one of the rivers for clean water is twofold, she said: you need a water jug and transportation to and from from the river. She has neither.

More bottled water started arriving in the city Thursday — part of the Government of Nunavut’s purchase of 80,000 litres. Four-litre jugs were distributed at the Arnaitok Arena parking lot and Arctic Winter Games Complex at 3:30 p.m. But both stations ran out of water by 5 p.m.

Sherry Nulliayuk said she heard about the water being given out, but she wasn’t able to get any because she and her two young sons could not get to the arenas quickly enough without a car.

“It’s kind of hard and disappointing when you are low-income and you have children to feed and you can’t wash dishes with the tap water,” Nulliayuk said.

She said she is using plastic containers to fill water at the library fill station, but those containers are too heavy to walk home with once they’re filled.

“I don’t want to go through that anymore,” Nulliayuk said.

Fortunately, some residents are helping out those in need.

Neoma Cox said that she, her partner and her three daughters are helping residents by offering to pick up their water jugs, fill them at the river and return them. She said she is doing it because not everyone has transportation or is able-bodied.

Cox said she has three daughters and she wanted to show them ways to give back to their community.

“If you’re able to help you should help,” she said.

Both Iqaluit Coun. Kyle Sheppard and Mayor Kenny Bell were at the Arctic Winter Games Complex giving out jugs of water.

Sheppard said everyone working at the city’s emergency operations centre, which is handling the water crisis, is thinking about the unequal access to clean water.

“It’s top of mind for everyone,” Sheppard said.

He said the city is bringing in 3,000 more water jugs for those without one. And to address the concern that the library is difficult to reach for some residents, the city is working to bring a water tank to the Qajuqturvik Community Food Centre, Sheppard added.

Bell said the city is coordinating with the Government of Nunavut and is in contact with the federal government on how to continue bringing more potable water to Iqaluit.

For residents who need assistance or have questions about drinking water, the city has established a water hotline at 867-979-5603.