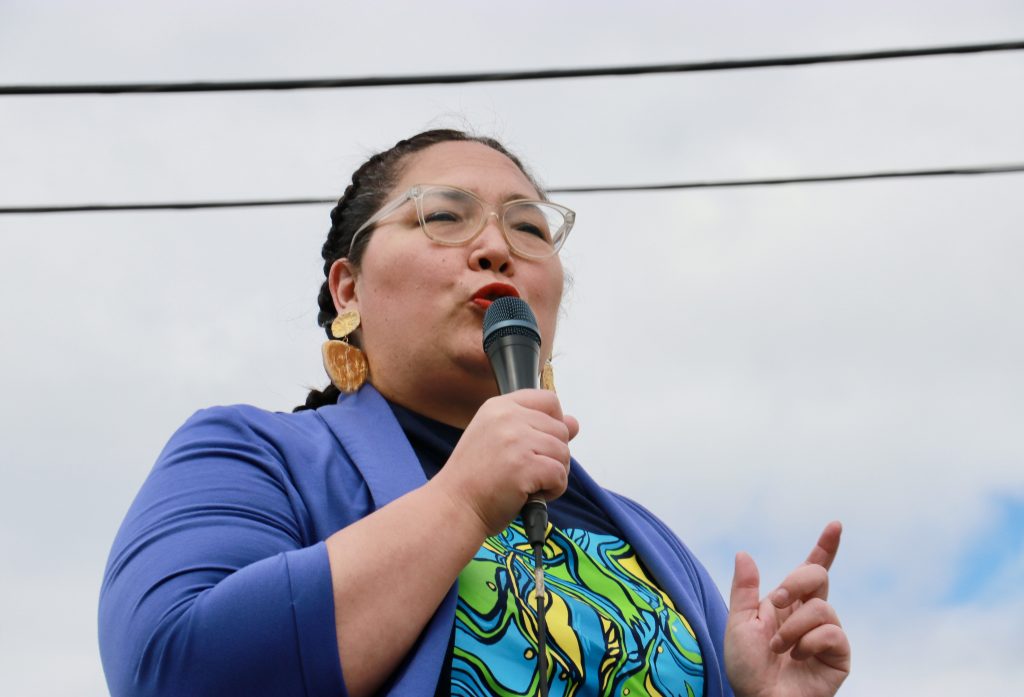 Nunavut Tunngavik Inc. president Aluki Kotierk, seen speaking at a Nunavut Day event in Iqaluit, says Pope Francis’ apology is “only one step towards reconciliation” and called on him to take more action, a day after the Pope gave an historic apology Monday for the role some clergy played in residential school abuses. (File photo by Meral Jamal)

Pope Francis’ apology is “only one step towards reconciliation,” according to Nunavut Tunngavik Inc., which sent a delegation of 55 Nunavut Inuit to Edmonton to witness the papal apology.

“Inuit have finally been heard and their experiences acknowledged,” NTI president Aluki Kotierk said in news release Tuesday, a day after the head of the Roman Catholic Church said he was “deeply sorry” for what some members of the church did as part of Canada’s residential school program.

Kotierk said she was moved by the “bravery, compassion and optimism for our future” that survivors showed in Edmonton.

The government allowed the Catholic and Anglican churches to run the schools. Many children were sexually or physically abused by the clergy who ran the schools.

For years, NTI called for a papal apology, including through the Truth and Reconciliation Commission, which included it as one of its 94 calls to action in its 2015 report.

In addition to the apology, NTI has asked numerous times for Pope Francis to instruct 91-year-old Rev. Johannes Rivoire to return to Canada to face criminal charges alleging he abused Inuit children in the 1960s and 1970s.

It also wants him to hand over church personnel files to be used in court, and to excommunicate Rivoire and disgraced priest Eric Dejaeger.

Rivoire, who lives in France, was charged earlier this year with one count of sexual assault against a girl in Arviat and Whale Cove from incidents alleged to have occurred between 1974 and 1979.

He was previously charged in 1998 with three counts of abusing children in Naujaat. Rivoire left Canada in 1993. Those charges were stayed in 2017.

Dejaeger, now 75, was granted parole in May after serving two-thirds of a 19-year prison sentence for abusing Inuit children between 1974 and 1982.

NTI also called on the Canadian Conference of Catholic Bishops to contribute funding to the Nunavut Tunngavik Foundation for culture and healing programs for Nunavut Inuit affected by residential schools.