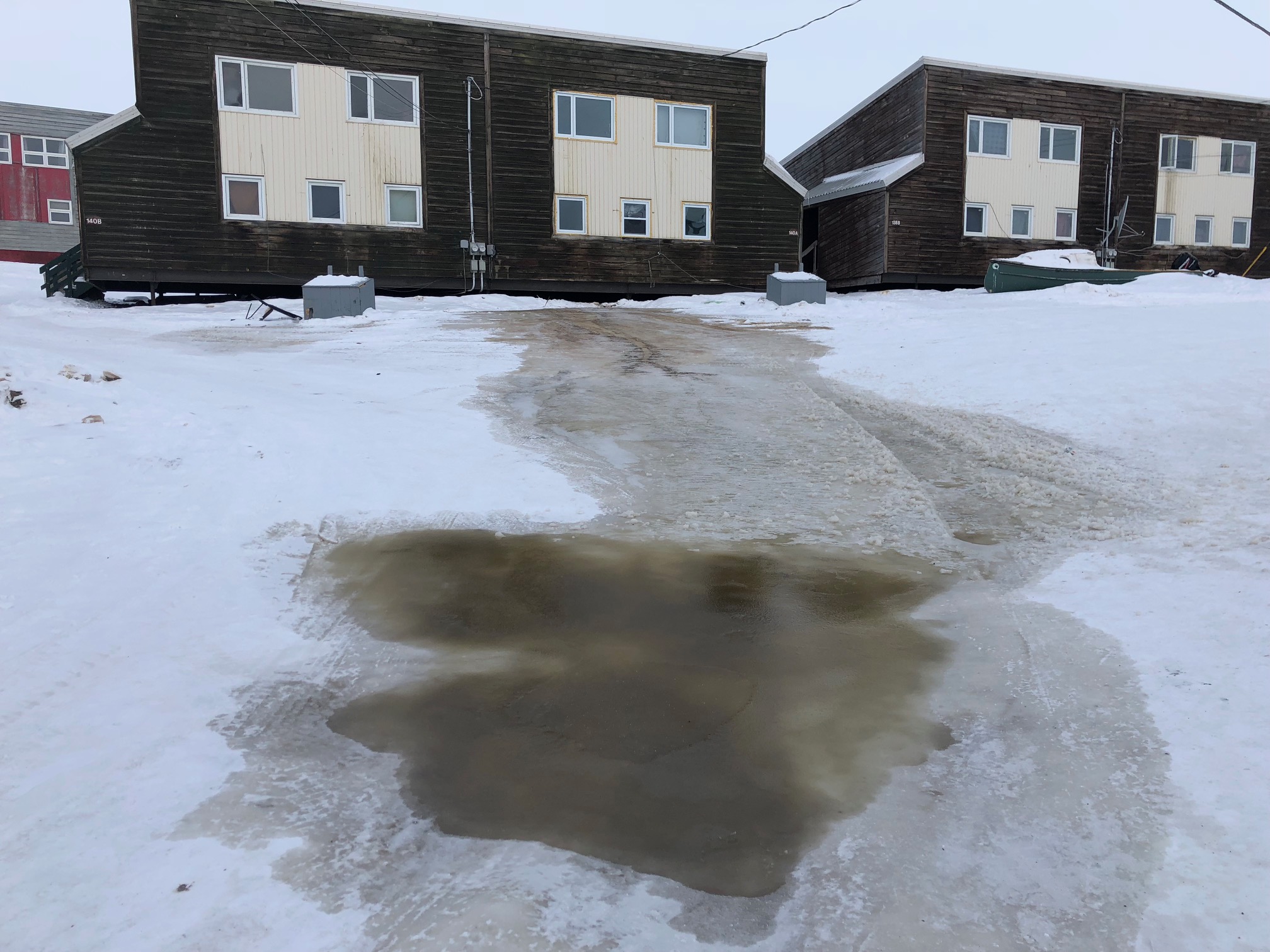 Raw sewage runs from under a row of houses in Iqaluit towards the street. It’s one of two places in the city last week where this problem, since cleaned up, could be seen. (Photo by Jane George)

As Nunavut celebrated the territory’s 20th anniversary on April 1, you could spot streams and pools of sewage throughout the capital city, caused by broken or frozen pipes.

In the weeks leading up to the big celebration, many residents had no water service and several neighbourhoods remained on boil-water advisories as heavy equipment operators struggled to dig deep into the frozen ground to get at, and then repair, faulty water mains.

Running the taps afterwards could result in dirty, particle-filled water that looked like urine.

“We need to be doing something now so we avert a crisis,” Iqaluit Mayor Madeline Redfern said about the deteriorating state of the city’s water and sewage system.

The past month or so has been marked by at least 10 disruptions in service and as many boil-water advisories around Iqaluit. 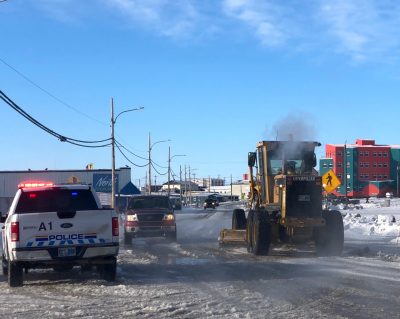 A broken water main on a busy road in Iqaluit creates a sheet of freezing slush and then ice. (Photo by Jane George)

In one instance, in a hard-to-overlook sign that something was wrong, a water main burst downtown and spewed water over a central thoroughfare, where it immediately froze into a dangerously slippery surface. 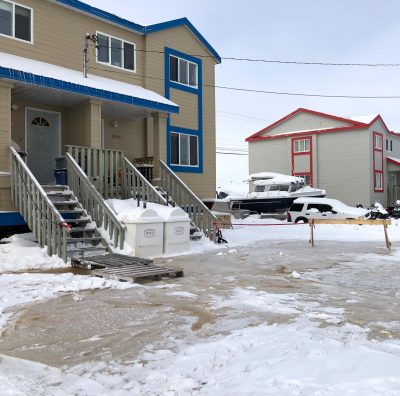 Would you want your children to play here? A pool of sewage lies in front of an Iqaluit house last week. It’s since been scraped away while heavy machinery operators on the other side of the street dig deep to try to find the source of the blockage. (Photo by Jane George)

And, in at least two places just last week, you could see brown sewage on the ground, close to homes, roads and places where children play.

This summer might not be better: last August, half of Iqaluit faced boil water advisories due to repairs and water shortages.

The city doesn’t qualify for federal emergency disaster relief money because there’s a minimum threshold of $20 million in damages to qualify, Redfern said.

“Our need is smaller,” she said. “We need Ottawa to understand our immediate requirements.”

Iqaluit’s ongoing problems with buried pipes are partly due to climate change, which is affecting permafrost and the stability of the deeply buried mains, making them more subject to freezing.

That won’t go away: a federal government climate change report said last week that future warming of permafrost will continue, with the area of Canada underlain by deep permafrost projected to decline by up to 20 per cent by 2090, relative to 1990.

Iqaluit is also bracing for the possibility of future water shortages—a problem compounded in the past by leaky water pipes.

Little snowfall this winter could result in a water shortage later in the year, Redfern said.

Meanwhile, the city’s storm-water drainage system is no longer able to support changes in precipitation brought by climate change.

Although there is $2 billion in federal government money earmarked for climate change adaption and mitigation that Iqaluit would like to tap into, the programs are too focused on sea ice and snow and “not where people are living,” Redfern said.

To pay for the water and sewage repairs, tallying up to well more than $300,000 so far this year, the city is digging into money from the federal gas tax fund, Redfern said, but that’s a finite amount of money for a growing problem.

Today’s problems are also a product, in part, of how Iqaluit grew, with its lack of “strategy, planning and resources,” as she put it.

To help cope in the future, the City of Iqaluit plans to create new development charges that would fund the replacement of an old sewage line that’s currently at capacity.

The city estimates that it would cost $256 million to completely replace Iqaluit’s water and sewage systems.

A targeted replacement would cost $198 million. For a full replacement, $55.2 million would go to the piped water system, $58.2 million to the sewage collection system and $106.3 million to roads.

Redfern said the city is now preparing a business case to back its needs.

“It’s our priority,” she said.

The Government of Nunavut has also made water a priority, with $766 million in infrastructure over 10 years focused on water-related infrastructure.

It’s working on a potable water strategy as well.

“Every resident of Nunavut has the right to fresh potable water,” said Lorne Kusugak, the minister of community and government services, during the last sitting of the Nunavut legislature.

“Although Nunavut has some of the best quality freshwater sources in the whole world, we still run into cases where no drinkable water is available and this is due to many variable local factors.”

Poor water quality is also public health issue in Nunavut: there have been recent health alerts from the GN about gastroenteritis and hepatitis A virus, which can be transmitted through ingestion of contaminated water or food.

Iqaluit’s problems are not necessarily more grave than those in other affected Nunavut communities. But they are more acute because they are on a larger scale and “this is where the development is taking place,” Redfern said.

They also have the capacity to disrupt the workings of the territory’s capital city. In March an elementary school had to send students home due to a water and sewage line break and recently the middle school closed due to sewage backup and students missed parts of two days in class.