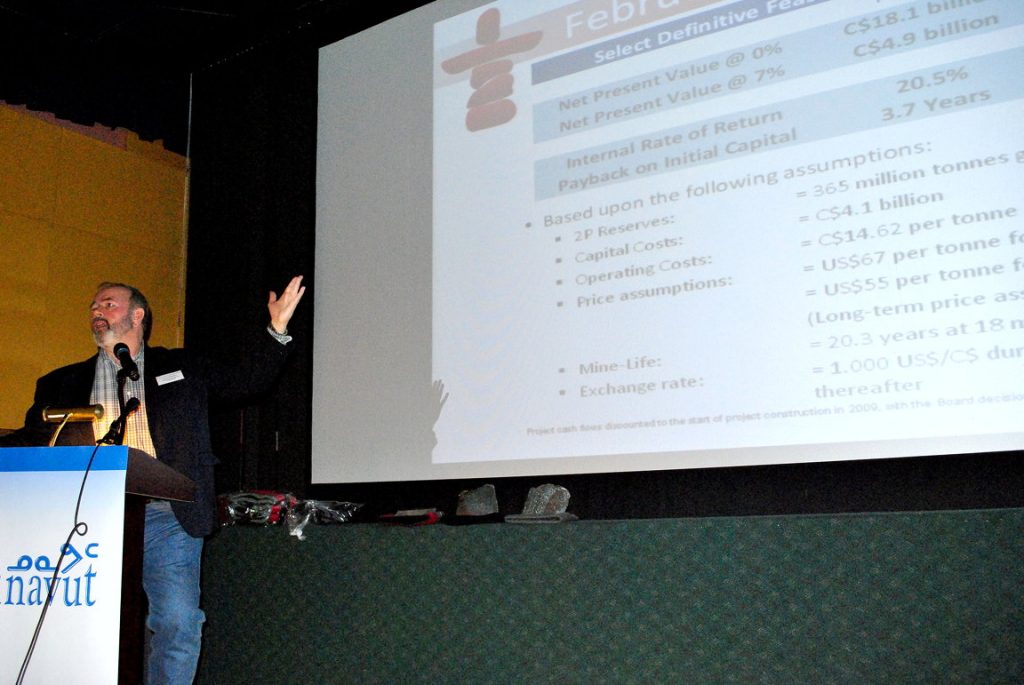 Gordon McCreary, the president and CEO of Baffinland when it was still a publicly traded company, pitches the Steensby Inlet road and port proposal for the Mary River mine at the 2010 Nunavut Mining Symposium. After getting federal permission for that plan, Baffinland, under new owners, opted in 2013 for a truck route to Milne Inlet instead. (File photo)

I have followed progress with Baffinland’s Mary River project over the years with great interest.

I was involved in the early days as the corporate operations manager for the Mary River project. Our team extracted the bulk sample, raised capital from the public markets and produced the definitive feasibility study that charted a shipping course to the south via Steensby Inlet.

I have been looking back at the news release that said, “Steensby Inlet was selected as the preferred location for the port, over Milne Inlet, after a comprehensive review of socio-economic, environment and operational considerations.”

Baffinland the publicly traded company, and clearly the successor private company owned by Energy and Mines Group and ArcelorMittal, have dedicated more resources to community consultation than most mining companies I’ve been involved with over 35 years in the industry—unprecedented for a junior mining company.

There really aren’t many of the old faces left, so it becomes more difficult to get an accurate feel of what’s happening beyond the information that becomes available through print and social media.

I get a sense that somehow, and for reasons not entirely clear to me, the integrity and trust that was progressing in the early years appears to have eroded.

I recall discussions with Inuit elders who feared both the impacts that major economic development would bring and the hardships that would exist without it.

That theme persists among Inuit in Nunavik as well, where I subsequently was involved with Jilin Jien and Goldbrook Ventures’ Canadian Royalties, as well as Oceanic’s Hopes Advance project. The latter, much like the Mary River mine, is a world-class iron ore deposit.

Mary River’s carbon footprint is relatively light as far as major industrial projects go in the iron ore sector, because the ore can be shipped directly. As a consequence, its operating energy requirements are relatively low.

So, the question is where did the project run off the rails?

I read Gary Vivian’s recent op-ed and he does a reasonable job summarizing the development of the iron ore market and the project to date.

The economic crash of 2008 saw Baffinland on its hind foot, because it had invested its cash in asset-backed commercial paper, which choked the company’s liquidity.

The project found itself with new ownership facing the same problem as its predecessor and other resource companies in developing these multi-billion dollar megaprojects: raising capital.

The inability to raise substantial sums of development capital resulted in the decision to truck iron ore to Milne Inlet as opposed to the permitted project, which would have shipped 18 million tonnes of ore by rail through Steensby Inlet.

Was the Milne Inlet truck route a mistake?

The cornerstone was laid then for the present discussion and impasse that exists today.

The project, tempered by the realities of the global iron ore market, initiated an incremental approach to producing iron ore and having it shipped through Milne Inlet.

I wrote to Bo McCloskey protesting the decision to truck ore for shipment from Milne Inlet, proposing that the increased material handling costs were apt to place total operating costs loaded onto ships in the order of $80 per tonne and that trucking both in terms of costs and total capacity would quickly become a constraint.

That concern appears to be present and has shaped the project’s proposed phase two expansion.

From an investment and operating context, it would be naive to believe that Baffinland wouldn’t want to increase production via Milne Inlet to 18 million tonnes per year at a future date, given the capacity of the proposed rail infrastructure, while acknowledging that the regulator could cap production at 12 million tonnes.

However, we can be certain that some future event will transpire that becomes the catalyst to justify increasing rail and shipping outputs to some higher capacity down the road.

The current $1 billion capital investment is a sum that presumably could be allocated to development in the direction of Steensby Inlet, assuming the balance of the capital requirement could be secured.

This is a problem that the federal government could play a central role in resolving, either through federal loan guarantees, or equity participation in the project, with clear repayment and equity recovery terms.

Baffinland’s current owners might also consider securing a strategic partner and a partial asset sale to raise capital. Baffinland might also explore interest in listing the company in order to access equity via the public stock exchanges.

From the onset there have been socioeconomic concerns raised about environmental impacts, especially with regards to narwhal, that have been at the forefront of shipping via the northern route.

I imagine that is the predominant concern of the Mittimatalik Hunters and Trappers Organization and Oceans North, and a problem that is not easily satisfied, even with the deployment of monetary compensation.

It should be noted that the approved Steensby project had similar concerns raised regarding walrus, caribou and other animals.

But undeniably, shipping logistics and associated costs are more complex when navigating through Eclipse Sound, and there should be reasonable confidence that the narwhal species will not be irreparably harmed as a prerequisite to expansion.

The relevant question for Nunavummiut should be: has the development of Mary River to date been a generally positive or negative experience for local communities?

There have certainly been quantifiable direct and indirect economic benefits and jobs. The Mary River project is significant in terms of Nunavut’s gross domestic product. Do these outweigh the concerns? Should they?

Before any progress can be made, trust and integrity need to be restored among the parties. The interests and concerns of both the mine owner and Inuit stakeholders need to be heard and understood and taken into consideration in defining mitigating solutions, notwithstanding the perceived capital and operating constraints.

The burden of responsibility lies with the mine owner to satisfy the socioeconomic and environmental concerns of local stakeholders. Nunavummiut cannot be faulted for any resistance that occurs in the absence of measured, reasonable, and informed assurances in response.

Aside from capital limitations, it would appear that shipping from Steensby Inlet and a rail corridor aligned in that direction remain both the company’s and the stakeholders’ preference. Over a decade later it remains the most viable solution in my mind.

It yields the most flexibility in terms of difficult shipping logistics and optimizing ongoing operating costs that are competitive when compared with Brazilian and Australian iron sources.

On the other hand, capital limitations in the context of the iron ore market is a real consideration that requires a resolution. Prime Minister Justin Trudeau and his new cabinet should take an active interest in nurturing that resolution.

In the fullness of time I expect a resolution can be found and implemented to the mutual satisfaction of both the mine owners and concerned Nunavummiut, and I extend my best wishes and encouragement that the parties arrive at that outcome.

Editor’s note: In December 2012, the federal government said yes to Baffinland’s first project proposal. That plan, which is fully permitted, is for a 143-kilometre railway heading south to a port at Steensby Inlet, with an annual production cap of 18 million tones of ore. Instead, in January 2013, Baffinland changed course, delayed construction of the Steensby Inlet railway and opted instead for a trucked route northwards to its port at Milne Inlet.