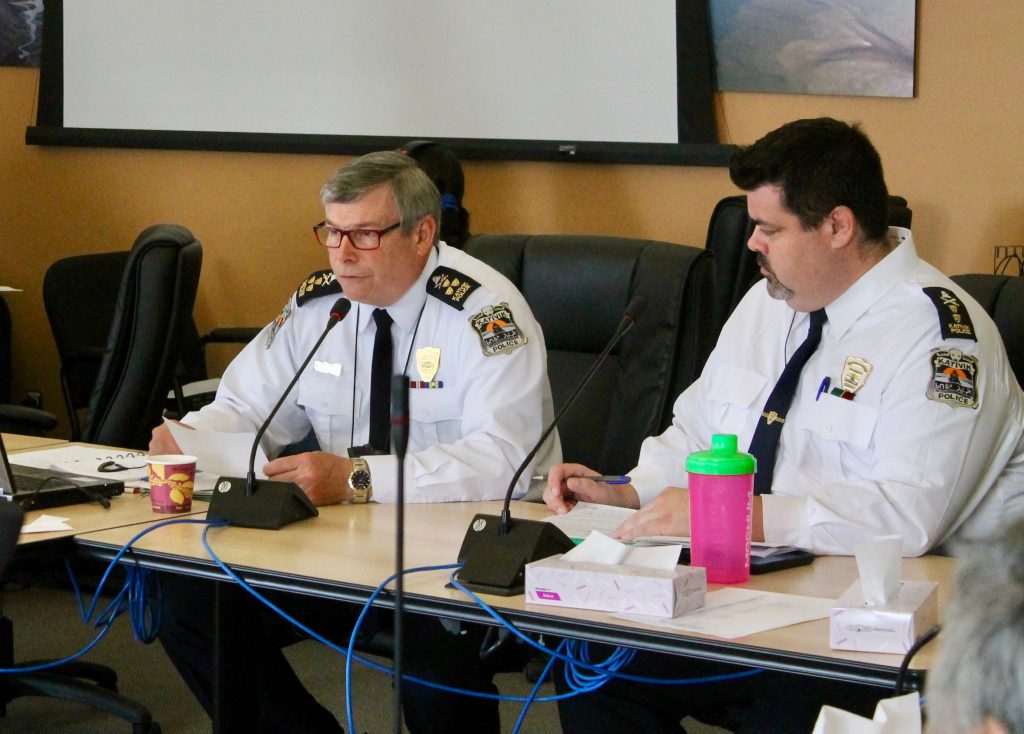 The Kativik Regional Police Force continues to face a major staffing shortage, with more than 20 officers having resigned over the past few months, says police chief Jean-Pierre LaRose.

With applications for jobs also dropping off, LaRose told Kativik Regional Government councillors on Sept. 11 that they have been unable to fill the numerous vacant positions.

“It was becoming really critical for KRPF, so we had no choice but to have officers from Sûreté du Québec,” he says.

The force is considered fully staffed when it has 65 officers.

At the moment, KRPF is supplemented with 20 officers from the provincial police, though responsibility for the 14 Nunavik communities remains with the regional police force.

“We’re doing a lot of efforts to recruit right now,” said LaRose. “I think at the end of December, we’ll be able to have all of our police officers in place.”

A wave of hiring across the province has left few recruits for KRPF, including young recruits from the police academy.

“We have to look outside the box and have other alternatives, that’s what we’re doing right now,” said LaRose.

That has meant expanding recruitment to the East Coast and sending 15 people to the Ontario Police College for Basic Constable Training, after which they will do an equivalency course in Quebec in order to join the KRPF.

They’ve also connected with the Montreal police to reach out to recently retired officers, inviting them to join the KRPF. So far, LaRose said, six of these officers have accepted and been put in place in Nunavik communities.

It is more often the young recruits that join the KRPF which, several councillors noted, can present problems in terms of maturity and sensitivity to Inuit culture.

Coun. Billy Cain of Tasiujaq said there have been issues with officers being overly aggressive and rough during arrests.

At present, a case is being investigated in Tasiujaq, following a complaint brought forward to the chief, confirmed KRPF captain Jean-Francois Morin.

LaRose added: “I will not tolerate any police that are cocky, aggressive. I have dismissed them before. It is not our vision for police here in Nunavik.”

The force is also predominantly male and non-Inuit: in terms of officers, 63 of 70 are male and only three of them are Inuit.

At present, Université Laval is working with the KRPF on evolving the training protocols for the police force so that new recruits have some understanding of the region and its culture before they start work.

Recruits will work through three modules that include general information on Inuit and Nunavik, as well as the history of the KRPF and policing in Nunavik, and Inuit culture and cultural diversity.

It also includes an introductory video for potential recruits, so interviewers can question them on the material to test their sensitivity and willingness to learn about Inuit culture prior to hiring.

“Before hiring somebody, he has to know what’s going on here, what’s the culture, what’s the tradition, he has to be interested in it,” said LaRose. “And we can ask those questions, so we have a better idea before we hire them.”

The training is something councillor Jusipi Kulula, of Quaqtaq, said is much needed.

“We know that we will begin to become more comfortable in this,” said Kulula.