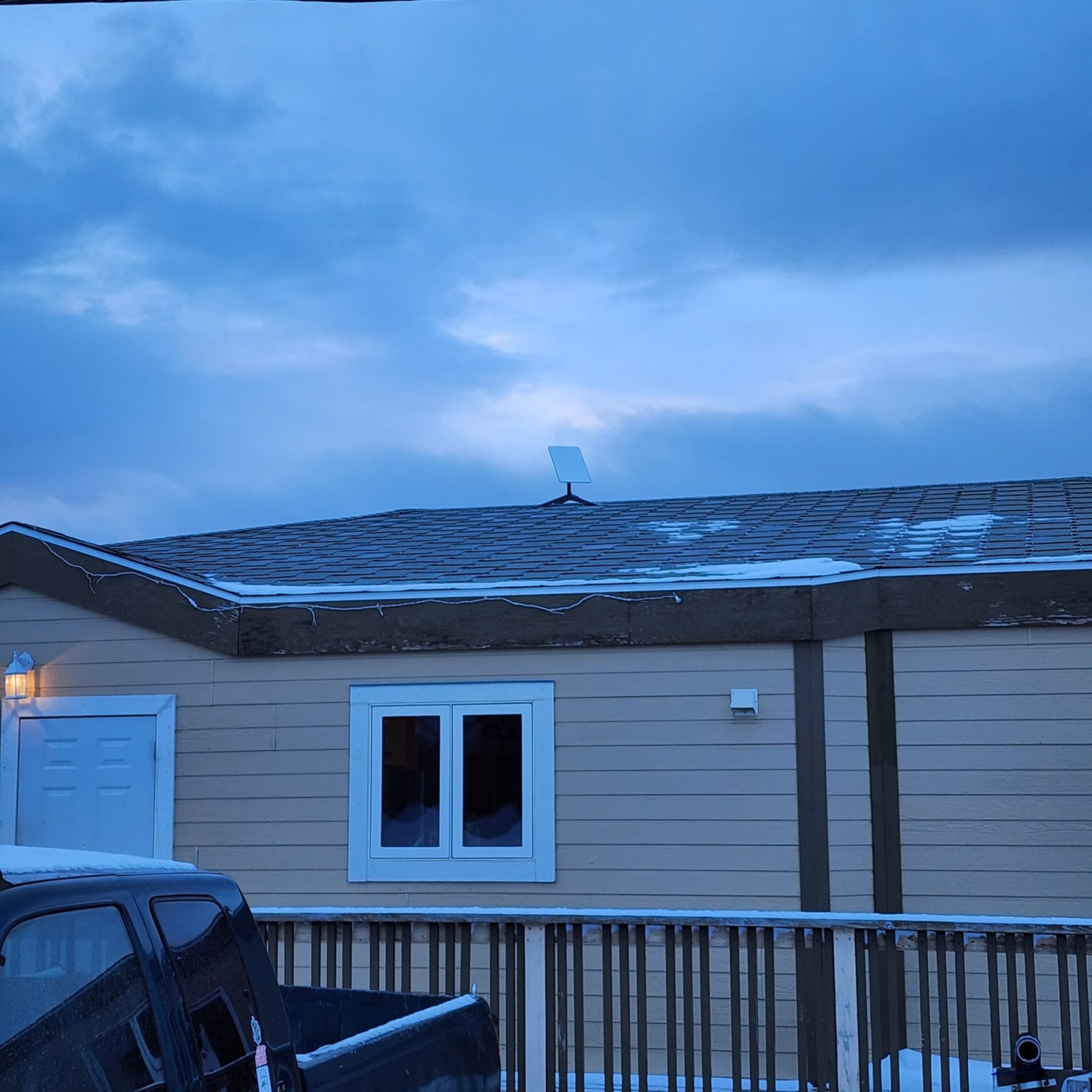 A mobile Starlink connection sits on top of a house in Iqaluit. Starlink has given Nunavummiut who pre-order their satellite internet the chance to buy the hardware and have it shipped. The company’s internet speeds can be as much as five times faster than speeds in Nunavut. (Photo courtesy of Marcus Pine)

Some jurisdictions have subsidized access to Starlink in remote regions; GN has no such plans

Marcus Pine just might have access to some of the highest internet speeds in all of Nunavut.

He’s one of many people living in communities across the territory who have preordered Starlink satellite internet and received notices this week that the service is now available to them.

Pine, who has a home satellite on order from the company, decided to try out the mobile Starlink hardware he already owns for his RV when he’s down south.

It works, he said, giving him speeds of over 170 mbps.

“As soon as I heard about it, I was on it instantly,” Pine said of signing up for Starlink.

Up until now, high-speed internet has been inaccessible to people living in Nunavut, with the exception of Sanikiluaq, which received access to Starlink in April when the service become available in northern Quebec.

A 2020 report from Nunavut Tunngavik Inc., described the territory as the only Canadian jurisdiction where there was no access to internet speeds higher than 25 mbps and above.

“I feel like this is going to be a game changer for accessibility for people,” said Kevin Iksiktaaryuk, a Baker Lake resident who has not only signed up for a Starlink pre-order, but also runs a Facebook group called Starlink Nunavut.

Faster internet will bring with it more ease for streaming, video conferencing, and playing online games. It also will allow businesses in Nunavut to better operate, Iksiktaaryuk said.

The excitement online has been evident, with the Starlink Nunavut Facebook group’s membership doubling over the past week from approximately 150 to more than 300 people.

“I’m really hopeful,” he said of Starlink coming to Nunavut.

“I feel like it’s going to bring a lot of benefits to the community.”

Starlink is a division of SpaceX, owned by Elon Musk. The company has launched approximately 2,300 satellites into low-Earth orbit over the past several years, with the goal of offering high-speed internet across the globe, including its most remote regions.

High-speed internet is defined as download speeds of 25 mbps or faster. Starlink reports internet speeds between 50 to 200 mbps.

The company’s hardware costs nearly $759, and its monthly service charge is $140.

In comparison, Pine said he pays $158 a month for download speeds of 15 mbps, adding his internet speeds don’t always reach those levels.

Some Canadian jurisdictions, such as Quebec and Nova Scotia, have incorporated Starlink into their plans to bring high-speed connectivity to their remote regions. Nova Scotia announced this year that it will reimburse the installation cost to people who live in places where there is currently no access to high-speed internet.

Quebec refunds the installation cost to qualifying homes and provides a monthly discount of $40 per month to Starlink customers.

Nunavut’s Department of Community and Government Services told Nunatsiaq News in an emailed statement it has no plans so subsidize installation costs in Nunavut.

The GN and private sector have been working for years on connecting parts of Nunavut to high-speed internet through a fibre-optic connection.

In 2019, the GN announced a plan to connect Iqaluit, Kimmirut and Kinngait to a fibre-optic link. This project, estimated to cost more than $209 million, is projected to be in service by 2025.

Meanwhile, the private company CanArctic is raising money to fund a fibre-optic connection to Iqaluit.

Starlink and its parent company SpaceX did not respond to Nunatsiaq News in time of this publication for comment about its expansion into Nunavut.