But enrolment comes with a big upfront charge 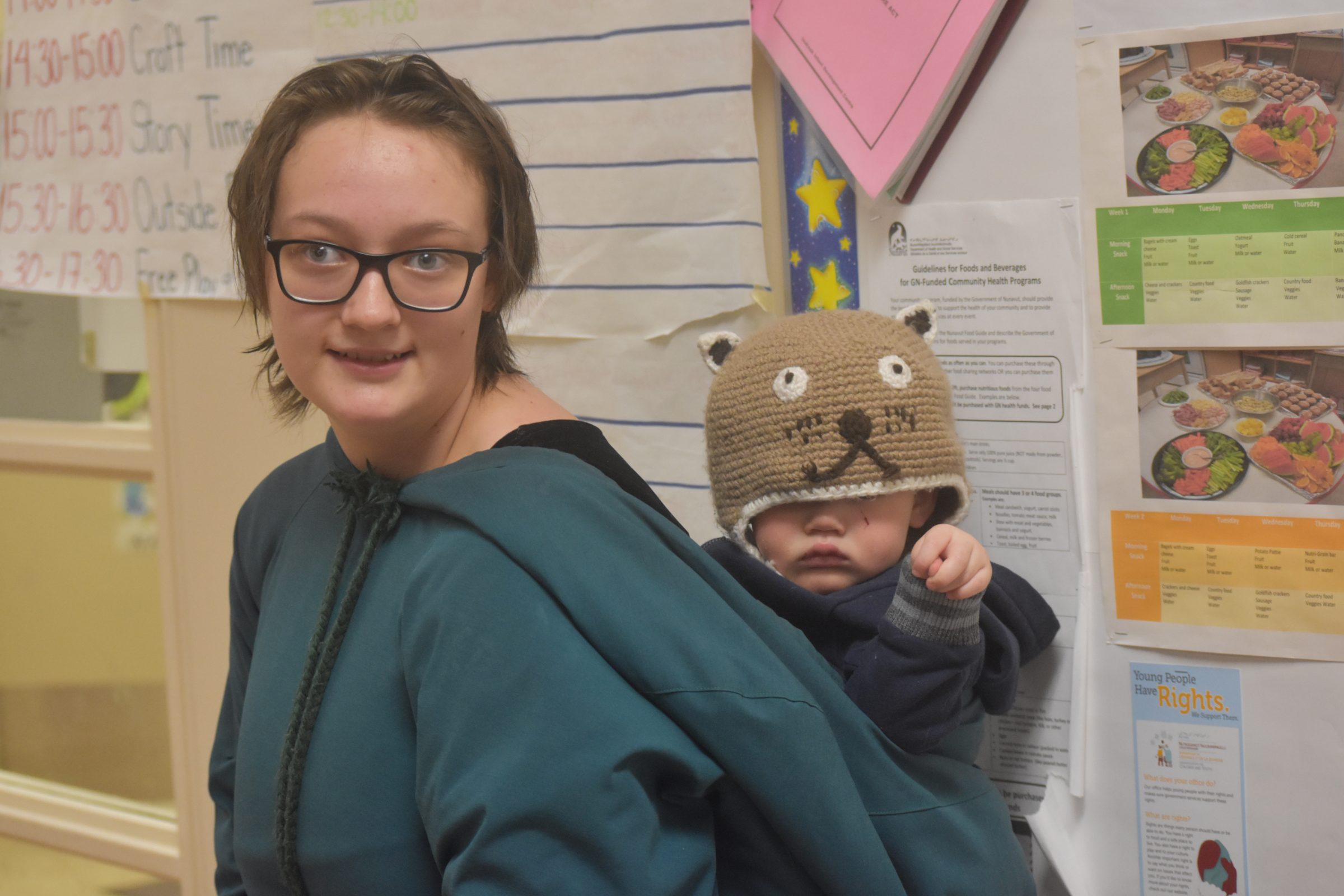 Nicole Alexander, a student at Inuksuk High School, can now bring her son, Jake, to the school’s daycare.

Starting Monday, Alexander returned to regular classes with her classmates. Last semester, she had to take online courses in the back of the school’s sewing room with her infant son in a playpen beside her.

“The separation will be hard,” said Alexander. But she is excited to get back to her studies.

Alexander is 17 and Jake will be one in mid-February.

They spent almost the entire first year of Jake’s life together while she stayed in school, with her son at her side.

Back in September, Alexander had tried to get her son into the daycare but she said she was told there was no space.

At the time, only five of the 24 available spots for children at the daycare were held by student parents.

Shauna Beaton, chair of the Inukshuk Infant Development Centre, wrote in an October letter to the Iqaluit District Education Authority that the number of student parents was limited to five spots because of financial challenges.

She had cited various concerns about the two funding options for student childcare: the Young People Stay Learning program offered by the Department of Education and QIA’s Kakivak program.

Her main point was that the two funding options could not be combined for those students who are Inuit.

But Kakivak later told Nunatsiaq News that the two funding options can be combined.

Beaton insists this was not what IIDC was told by Kakivak before the June 2018 policy handbook was released. She said there must have been a miscommunication back then.

However, Beaton does now acknowledge that Kakivak does allow eligible students to combine the two sources of funding. It is paid out quarterly to the daycare.

Starting Monday, Alexander said there is a space for her child, provided that she pays an upfront charge of $1,080.

That’s the result of two fees, according to Alexander and the DEA—the first two weeks’ charge that grants Jake space at the daycare for $540 and a deposit for the last two weeks of the service for another $540.

“I used my savings, Jake’s savings and my ‘child tax’ to pay it,” Alexander said.

She said she does not know when her YPSL funding will kick in so that her daycare is covered. And she also does not know if she will be reimbursed for that deposit.

In fact, the news about the payment was a surprise for her the Friday before classes started. She was in a rush to make the payment on Monday morning.

Alexander said she was not even sure Jake would get into the daycare that morning, because she had only been told about one $540 fee the Wednesday earlier.

The Department of Education said YPSL funding is paid at the end of each month for “approved and actual days the child and the student attended daycare and school.”

“It is up to individual facilities to decide if they require a deposit from parents and for how long they hold onto it,” it said.

Payments are made directly to the daycare facilities in nearly all cases.

Beaton said on Monday that there are still five student parents with children enrolled in the daycare.

Since one of the students has two children, that is a total of six children of student parents now, according to the Iqaluit DEA.

The remaining 18 spots are being used by children of teachers and non-students, the DEA said.

Doug Workman, chair of Iqaluit’s district education authority, had said before the holidays that he and the daycare were working toward an agreement to find ways to get more student parents into the school daycare.

Workman said the goal was to decrease the barriers for young parents to access the daycare at the high school, which was originally created to prioritize students.

Since then, DEA representatives said at a board meeting on Monday, Jan. 28, that the daycare is considering allowing up to two infants from the age of nine months into the daycare.

Beaton said she wouldn’t comment on the ongoing negotiations. But Workman said he has been disappointed with the counter-offers that the daycare has sent the DEA.

A meeting about the MOU that was supposed to be created between the daycare and the DEA was pushed forward another two weeks, Workman said at Monday night’s board meeting.

Beaton told Nunatsiaq News she wants this meeting to be held in private. But Workman has said the DEA will oppose any in-camera meetings about this topic, because it affects the public.

In the meantime, the Iqaluit DEA plans to start a letter-writing campaign aimed at the Department of Education. It wants to help student parents get more funding so they can stay in school and get their kids into the daycare.

Another problem with the funding is that only full-time students are eligible, said Workman.

Sometimes, students are missing a few credits before graduating, and as things stand, the funding is not accessible to them, he said.

Andrea Witzaney-Chown, an Iqaluit DEA board member, said the maximum amount for YPSL funding “definitely needs an increase” so that it can work for Iqaluit student parents.

“The cost of daycare is higher here than in other communities,” said Witzaney-Chown.

Beaton said the IIDC had been advocating for YPSL funding to be reviewed for years.