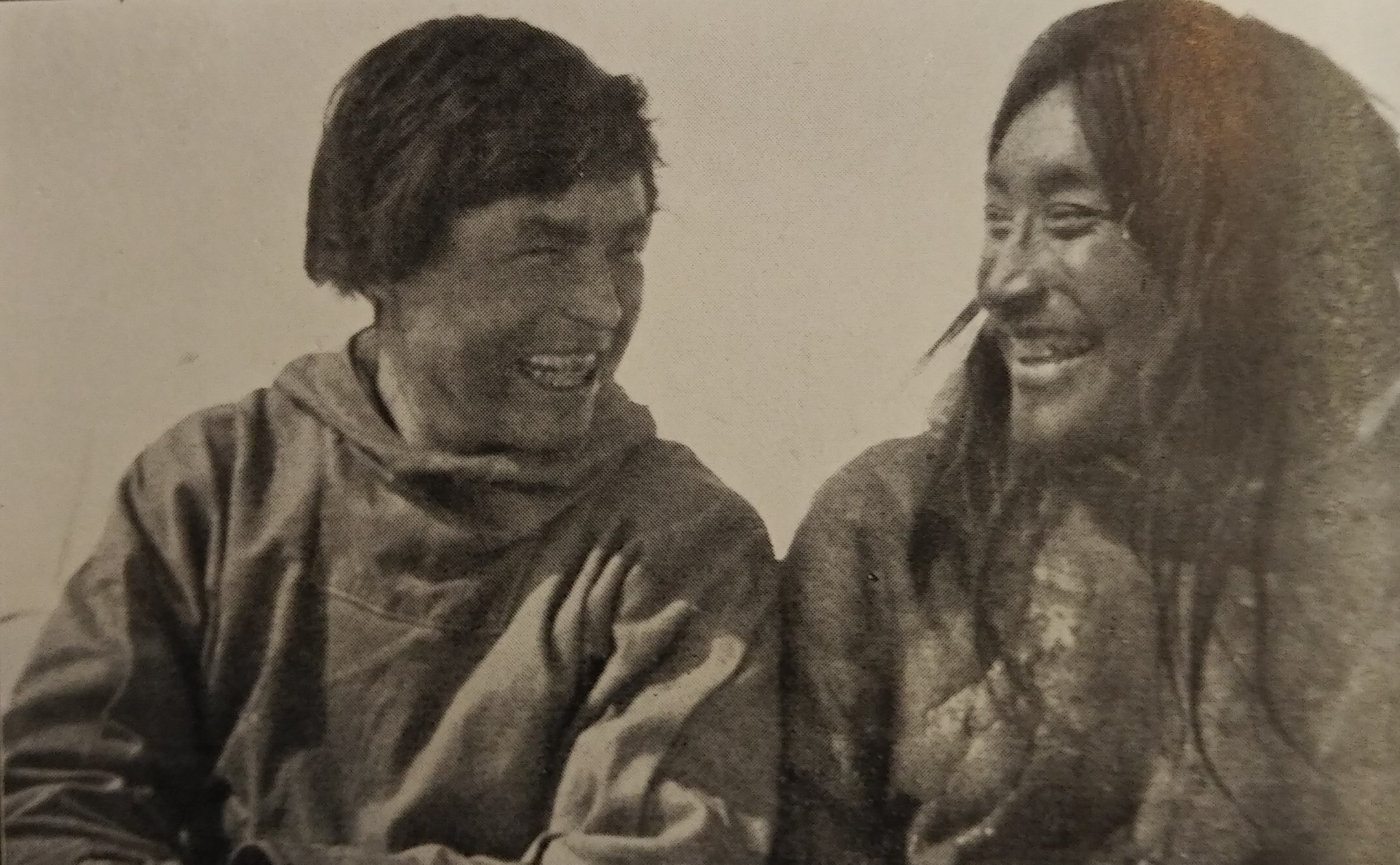 Rasmussen’s assistant, Qaavigarsuaq, shown in this illustration having a chuckle with Qaqortingneq, a leader of the Nattilingmiut. (Photo from “The Netsilik Eskimos, Report of the Fifth Thule Expedition,” Vol. VIII, No. 1, 1931, facing page 409)

After their encounter with Iksivalitaq, Danish explorer Knud Rasmussen and his party spent some time near Pelly Bay.

Taparte and Helge Bangsted left them on April 23, 1923, to return to Danish Island. Anarqaaq remained, having taken a local woman as his wife.

With two Nattlingmiut guides, Rasmussen left the camp the following day and travelled north to where he came upon a large village of 32 snow houses near the North Magnetic Pole.

There, he traded for ethnographic specimens, among them a large collection of amulets. For some, he paid with locks of his own hair which, he noted, the “Eskimos considered possessed unusually great powers of protection.”

On May 20, after an absence of nearly a month he returned to the camp where Qaavigarsuaq and Arnarulunnguaq awaited him.

Arnarulunnguaq had busied herself in his absence with the preparation of spring and summer clothing. Qaavigarsuaq had hunted seal for dog food in preparation for a trip west to Kent Peninsula with a local man, Usugleq.

They left on May 23 to take the collections to the Hudson’s Bay Company post there, from where the company would ship them south. He would also purchase ammunition, food and tobacco, which were all running low.

In the meantime Rasmussen and Arnarulunnguaq travelled with a hunter, Inugtuk, and his family to Back River, also known as Great Fish River, to visit the isolated Utkuhikhalingmiut.

They reached their settlement on Lake Franklin on the last day of May. Rasmussen wrote of them, “Utkuhikhalingmiut will always remain in my memory as the most elegant, the most handsome and the most hospitable people I met on my long journey, in fact, the healthiest and the happiest I have ever associated with.”

By June 13, Rasmussen and Arnarulunnguaq had relocated to Malerualik on King William Island, where they were to meet Qaavigarsuaq. He, however, was overdue.

This was cause for concern because Rasmussen was “quite devoid of the accustomed things that add zest to life: no tea, coffee, sugar or tobacco … unable to conclude a long day’s march without a pipe.”

Eventually, even their matches began to run out. Inuit there told him that the Killinirmiut, their neighbours to the west, were very dangerous people and had probably killed Qaavigarsuaq.

A respected female shaman held a séance and reported to Rasmussen that Qaavigarsuaq was still on his way home and not far off.

“He had killed two bears on the way,” she said, “and had had many other difficulties to fight against.”

Despite her report, the common belief was still that Qaavigarsuaq and his companion had been murdered by the Killiinirmiut.

Finally, Qaavigarsuaq returned on Sept. 3. The collection had been delivered to the Hudson’s Bay Company at Kent Peninsula, but fox trapping had been so good for the Inuit there that all the store’s trade goods were sold out.

Qaavigarsuaq was able to get only enough ammunition to use on his way back. On his arrival, he shouted out to Rasmussen, “Very little ammunition, no tobacco, no tea, coffee, sugar or flour! But we are alive and kicking, and that hasn’t always been as natural as you might think.”

Despite the lack of supplies, Rasmussen and Arnarulunnguaq had spent a pleasant enough summer at Malerualik.

The Nattilingmiut assembled there in the summer, coming from numerous winter settlements. There the caribou crossed Simpson Strait from Adelaide Peninsula, and the rivers abounded with salmon.

Rasmussen wrote of “the summer joys of the Nattilingmiut.”

“Never in my life,” he wrote, “have I ever seen such frolicsome and happy people, so gaily starving, so cheerfully freezing in miserable, ragged clothing.”

With its large summer population, Malerualik was also an ideal place from which to made excursions out to other summer communities, and to investigate the intellectual culture of the people.

Rasmussen was concerned that the Nattilingmiut wanted payment for most of their interactions with him. He was very low on trade goods and wrote, “At first I felt put out at the arbitrary ‘something for something’: but I became more patient when I realized that after all, these people were certainly in the right.”

But Rasmussen noticed something peculiar — that, for information on traditions, religious beliefs, old stories and songs, they only requested payment when he wrote it down.

“For them it was not an exchange of thoughts … My writing them down made these things ‘something I would take home with me’ … and the art of writing — an art so inconceivable to them, one that could make flourishes and strokes to speak — made their simple words everlasting, or eternally talking, and this in their opinion must give them a new value.”

Rasmussen and Arnarulunnguaq also conducted archeological excavations that summer. At the end of August, they decided to build a stone house of the type the Inughuit built in northern Greenland, a warm place in which to write.

Rasmussen carried stones to the site while Arnarulunnguaq did the building. Among the Inughuit in Greenland, the women generally built the winter houses while the men hunted.

On Sept. 21, a surprising event occurred: A ship arrived under full sail!

The young Inuit had never seen a ship before.

They wondered: “Wherever could they have got all that wood from? And it swam over the water like a big bird, the sail spreading out from the hull like great white wings!”

The vessel was El Sueno, “an old worn-out yacht” from San Francisco owned by the Hudson’s Bay Company. It was manned by a Swede, Peter Norberg, and a Dane, Henry Bjørn, who were there to establish a trading post on King William Island.

Rasmussen was impressed — Norberg had forced his way through Queen Maud Gulf, the most difficult part of the Northwest Passage, without charts or navigational aids.

The arrival of El Sueno spelled salvation for Rasmussen; he was able to acquire all the ammunition he needed.

With that, he was able to spend his last month on King William Island “free of cares,” occupied only with preparations for the upcoming winter’s long sled journey.

Winter began in mid-October; the lakes froze over, and the ground was covered with snow. On Nov. 1 he, Qaavigarsuaq and Arnarulunnguaq left Malerualik to continue west to the land of the Killinirmiut.