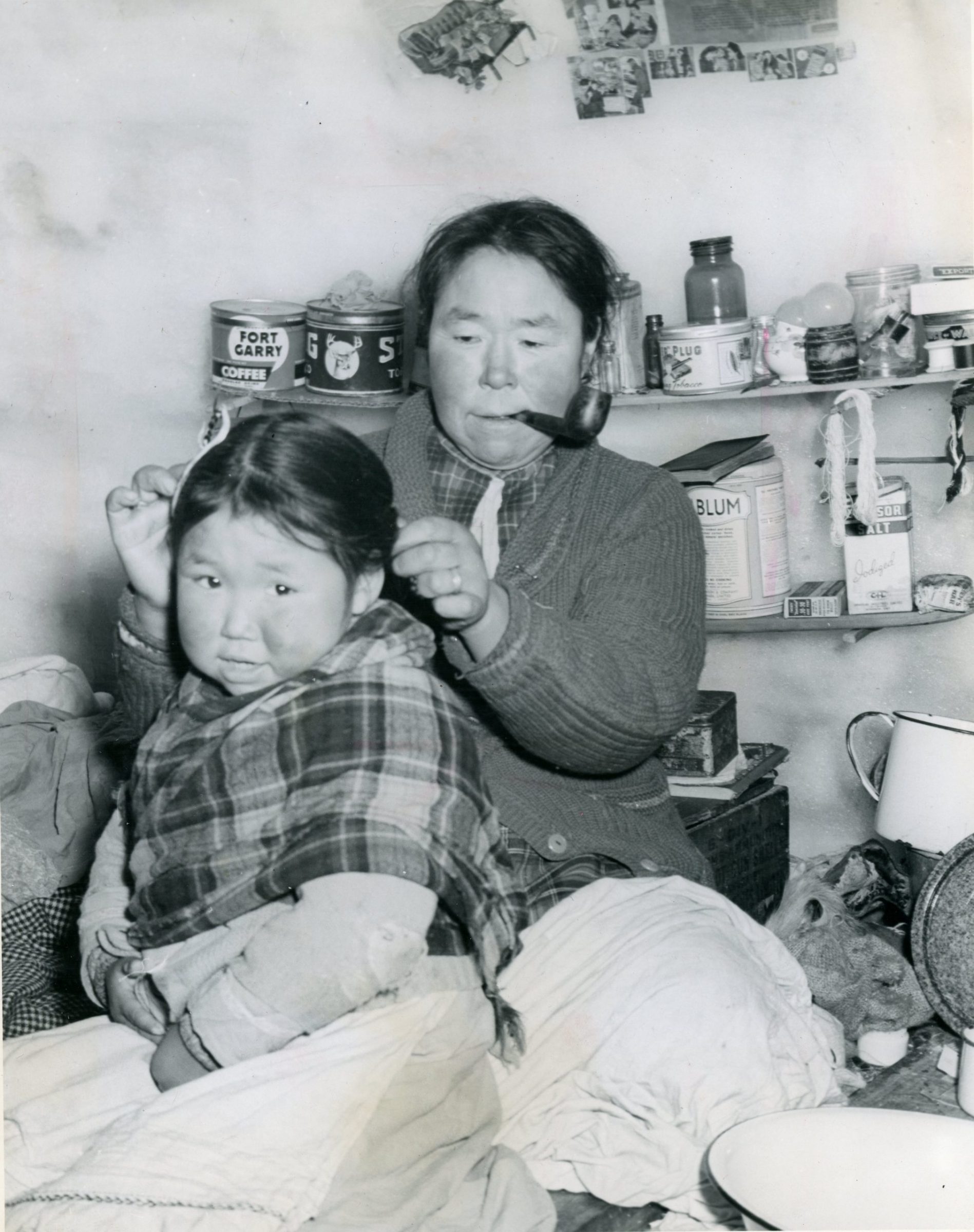 A pipe-smoking mother fixes her daughter’s hair in the eastern Arctic. (Harper collection)

My last column dealt with the history of tobacco use among Inuit. This is the conclusion of that story.

The Catholic missionary, Emile Petitot, in the Mackenzie Delta in the late 1800s, wrote “here tobacco replaces opium; it is introduced with a pinch of caribou hairs torn from the parka, with which the bowl [of the pipe] is first partly filled. The resulting mixture, the smoke of which the Eskimos swallow in greedy mouthfuls, is exhaled with the most noxious odour….

“The operation concluded, the Eskimo, haggard, trembling, out of breath and bathed in perspiration, gathers his wits, distracted as they are by the effects of what he has absorbed, and swallows a cupful of fresh water, which restores him.”

Tobacco use had no age limits. In Cumberland Sound, Captain George Tyson of the American whaler Florence employed an Inuk named Nepeken in 1878. His adopted son As-see-wer (probably Aasivak) was about five years of age. Tyson said of him that “he can chew and smoke equal to an old tar,” adding, “They commence young in this country. I have seen some of the little girls, not older than this boy, chewing and smoking tobacco.”

This is consistent with what U. S. Navy lieutenant George Stoney observed about the Inupiat of Alaska in the 1880s: “One of the first instructions to children is how to smoke and chew. It is customary for the mother to take her babe from the breast and put her pipe or quid of tobacco in its mouth.”

Another American whaler, George Comer, who worked in northwestern Hudson Bay, wrote in his journal on August 1, 1905, about the sighting of a whale: “The whale was raised by a native boy living here. Later he got his box of tobacco—this is the prize given to the person who first sees a whale and it is caught.” 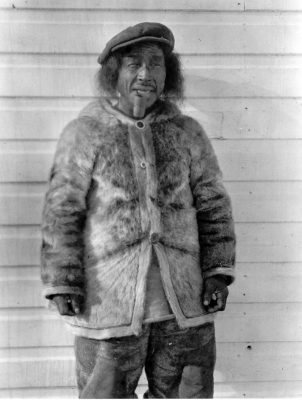 Karen Routledge, in her book “Do You See Ice?” documents a story that was told by Etooangat of Pangnirtung in the 1990s. Etooangat was often referred to as the last of the Inuit whalers in Cumberland Sound. He related his father’s first encounter with qallunaat—white people. The whalers gave Etooangat’s father a small barrel, a box of matches, and a clock. The barrel was full of tobacco, and the man thought that it stank and tasted awful. He dumped the contents into the sea but kept the barrel as a useful container.

“All that fall,” Routledge writes, “tobacco washed up along the shoreline. Later in life, Etooangat recalled, his father would yearn for tobacco and think back to when he had thrown a whole barrel of it away.”

Another Pangnirtung man, Joanasie Dialla, recalled the wreck of a ship from which people salvaged tobacco and other goods. The ship had been wrecked just before his birth in 1913 and the event became an omen in his life; in years to come, he often dreamed of people fishing tobacco out of a wreck, and he would invariably catch a seal the following day.

Therkel Mathiassen, an archeologist on the Fifth Thule Expedition in the early 1920s, wrote, “Smoking is now generally spread among the Iglulik Eskimos and has been ever since the first contact with white men.”

Pipes were the preferred method of smoking. “The pipes are for the most part home made,” he wrote. “The bowl is cut out of soapstone and the stem made of two longitudinal wooden pieces bound together with sinew-thread. The head has three brass mountings.” In another example, “on the bowl is a brass cover held on by a chain, and on this chain hang three strings of beads and a pipe-cleaner, needle-shaped, and a spatula-shaped scraper, both of brass.” He noted that the head could also be of antler.

Mathiassen wrote that the pure tobacco, as purchased from the trading post, was too strong and Inuit mixed it with twigs and other vegetation. “Both men and women smoke, mostly indoors and, as the women are mostly indoors, it is they who smoke most,” he wrote. “The pipe does not hold much tobacco and as a rule only a few draws are taken every time it is lighted, before it is laid aside or passed on to another mouth.”

Even bedtime provided little respite from the omnipresent smoke inside a dwelling. Mathiassen observed, “One peculiar custom is that every time a man or a woman wakes up during the night, the pipe is lighted and a few puffs are taken, whereupon it is laid down and one goes to sleep again.” 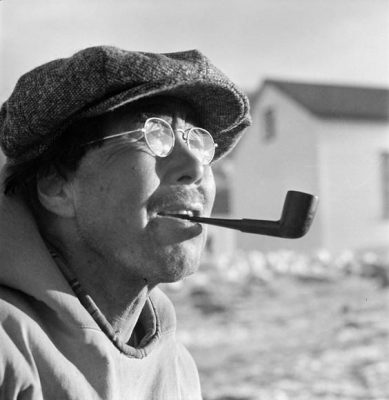 Smoking had become an addiction. “Smoking has now become quite a passion,” he wrote. “When the store of tobacco is exhausted, they start upon old linen bags or the like, in which there has been tobacco, and these are chopped up and mixed with pieces of wood or bilberry twigs; they smoke all kinds of substitutes such as heather, cotton grass and the like, these being mixed with old pipe scrapings as long as they have any.”

In 1943 four men in the Belcher Islands had a craving for tobacco. Honest young fellows, they knew that there was tobacco in the Hudson’s Bay Company post, but the trader was away and the store was boarded up. They decided to make the long trip to Great Whale River by kayak to satisfy their longing.

“There was no pressing need to make the trip except that we wanted tobacco,” recalled Ali Apakok 40-some years later. “Back then it seemed to us that tobacco was the most important thing in the world… Back then all our fears were overcome by our desire for tobacco, and if a person knew where tobacco could be got, that person would be drawn to that place like a magnet.” The trip was dangerous. It took a week in generally poor weather. Some nights, they lay inside their kayaks to sleep. To weather a storm, they lashed the four kayaks together to form a large raft. 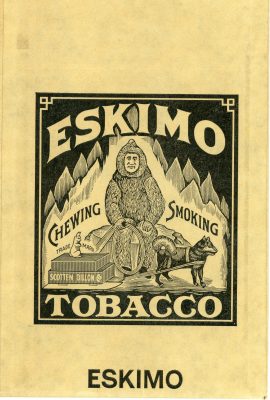 Making land too far north in Richmond Gulf, they skirted the coastline southward. On the way they met Sammy Crow and Charlie Kumaluk and their families travelling by motorboat. “They gave us some tobacco to smoke,” recalled Ali. “We rolled our cigarettes and smoked. I got so high that I kept looking at my paddles to see if they were dipping in the water the wrong way, because I couldn’t feel any resistance anymore.” He said he was “energized” by the tobacco. Resupplied with tobacco, they made the return trip home from Great Whale River on the HBC boat.

Recalling his kayak odyssey and his tobacco obsession at the age of almost 70, Ali Apakok had no regrets. “I should have used it [tobacco] at every opportunity because now that cigarettes are readily available, I cannot smoke anymore.”

Alex Spalding, in his dictionary of the Aivilingmiut dialect, documented a number of words for tobacco. It was borrowed into Inuktitut as a loan word from English: tipaak on the west coast of Hudson Bay, tavvaaki in North Baffin, and tapaaki on the Quebec coast. He also gives imujaksaq for cigarette tobacco, sannalik for pipe tobacco, tamuattuaq for chewing tobacco, tipaak sitijuq for plug tobacco, among other words. A dictionary of Kangiryuarmiut Inuinnaqtun gives tipaaquq as the loan word for tobacco, as well as higaakhaq, with higaaq being the word for cigarette.

Two decades ago, the well-known Inuktitut teacher Mary Panigusiq Cousins taught me a wonderful word. It was tumaattijuq, which she explained as meaning “uses cigarettes or chewing tobacco too much, to the point of excess.” The word is barely recognizable as an English loan word. But it is. It comes from an Inuit attempt in bygone days to say “too much” with a verbal ending added. It is a concise evocation of the excesses of tobacco use in the Inuit world of decades past.