The Inuit love affair with tobacco, part one 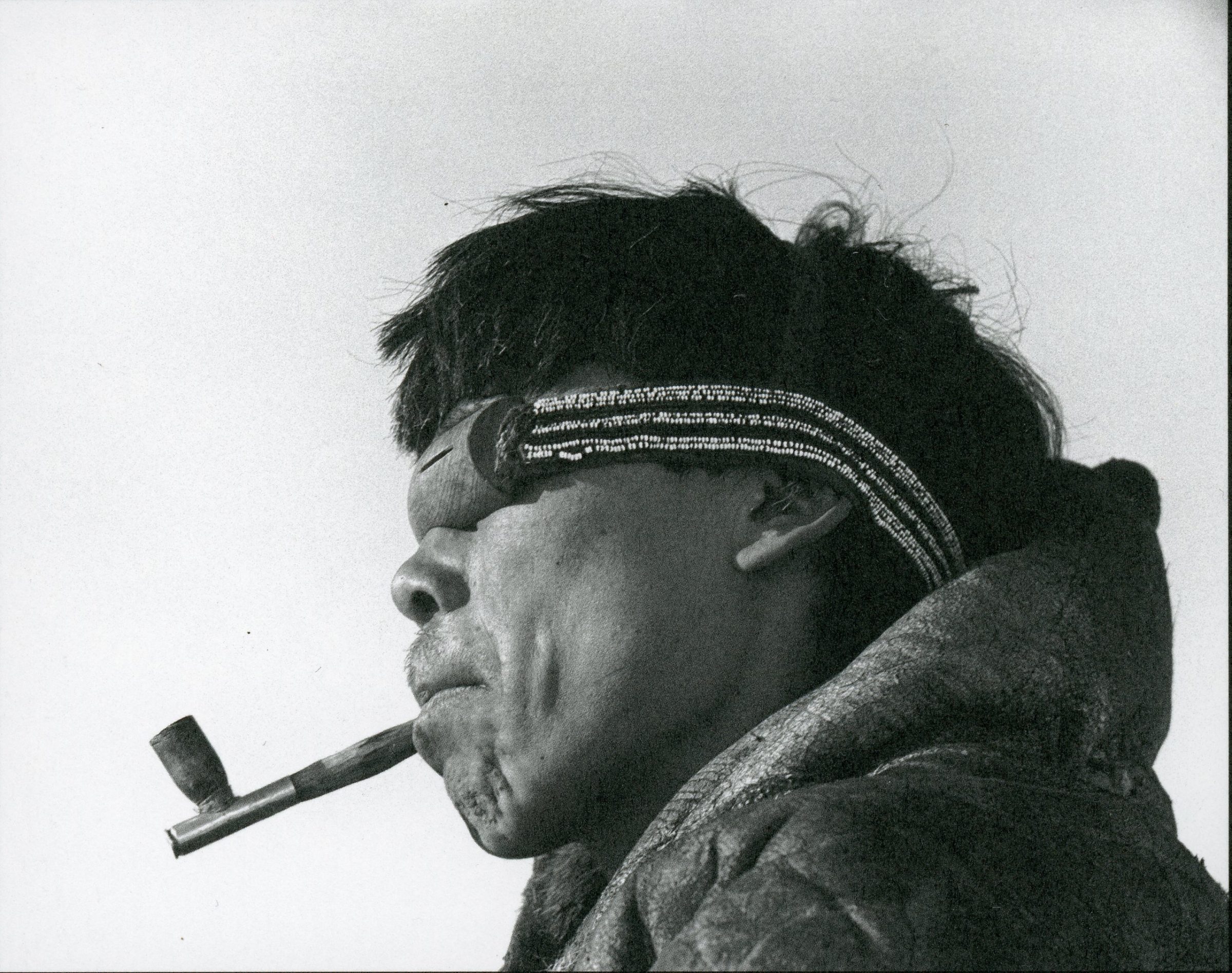 A man in the inland Kivalliq smokes his pipe in 1950. (Harper collection)

Governments at all levels wage anti-smoking and anti-tobacco campaigns. The Government of Nunavut is no exception. Perhaps they are having some success. But the Inuit love affair with tobacco goes back a long way.

Europeans discovered tobacco when they first came to America in search of a passage to Asia. They took it back to Europe and cultivated it there before re-exporting it throughout the world. Inuit developed a dependence on tobacco through their association with explorers, whalers and traders.

William Edward Parry and George Lyon were the first European explorers to meet Inuit in the Iglulik area in 1822. Lyon, in his “Private Journal,” wrote that “the sailors very soon discovered that the natives could do ‘anything in the world,’ and amongst other accomplishments were convinced that they could chew tobacco; but when I saw several of them swallowing very large pieces of it, I thought proper to put a stop to so cruel a joke.” He added that “They all endeavoured to smoke.”

Even earlier, in the 1730s, a party of Cree had raided an Inuit camp in James Bay and killed a number of men and women before taking 10 children captive. About a year later the Hudson’s Bay Company bought one young Inuk—whom they named Charles—from the Cree in return for one pound of ‘Brazil tobacco,’ a gallon of brandy, and one and a half yards of blue broadcloth.

Tobacco had reached Alaska as part of the cross-Bering Strait fur trade, which was originally controlled by Chukchi tribesmen who bought furs from Alaskan Inuit and traded them into Asia. The Chukchi tribesmen were eventually replaced by Russian traders. In 1822 on a Russian brig in Norton Sound, the captain recorded that “our guests were very happy to learn that we had brought much tobacco and many pewter pipes; in fact they danced up and down with joy and, going up to every sailor, said ‘kuyanna-kuyanna’ [‘thank you-thank you’].”

On a British voyage of exploration in 1826-27, Frederick William Beechey encountered Alaskan Inuit and noted, “Smoking is their favorite habit, in which they indulge as long as their tobacco lasts. Parties assemble to enjoy the fumes of this narcotic…. Their pipes are short, and the bowls of some contain no more tobacco than can be consumed in a long whiff; indeed the great pleasure of the party often consists in individuals endeavouring to excel each other in exhausting the contents of the bowl at one breath, and many a laugh is indulged at the expense of him who fails, or who, as is very frequently the case, is thrown into a fit of coughing by the smoke getting into his lungs.” He added, “We witnessed a smoking party in which the women and children partook equally with the men.” 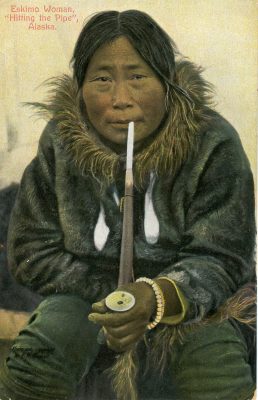 By 1885, Americans had supplanted the Russians in Alaska. A lieutenant aboard a U.S. Navy ship wrote that the article most in demand in Kotzebue Sound was “tobacco, the strongest and darkest Kentucky leaf [and] dark leaf Russian tobacco.” These were more in demand than even guns and ammunition.

In 1837 Thomas Simpson, exploring for the Hudson’s Bay Company in the area of Point Barrow, Alaska, wrote, “The grand article in demand here was tobacco, which, as in Dease Inlet, they call tawāc, or tawācah, a name acquired of course from the Russian traders. Not content with chewing and smoking it, they swallowed the fumes till they became sick, and seemed to revel in a momentary intoxication. Beads, rings, buttons, fire-steels, everything we had, were regarded as inferior to tobacco, a single inch of which was an acceptable equivalent for the most valuable article they possessed.”

Simpson also commented that tobacco, in its inexorable march eastward from Bering Strait, had not yet, in his day, reached Herschel Island. But in the following decades it did. At Point Barrow by the early 1880s, tobacco was so common that the Inuit had become discerning shoppers. ”They use all kinds of tobacco” wrote John Murdoch, “but readily distinguish and desire the sorts considered better by the whites.” Those included “Navy” tobacco and Russian yellow “Circassian” tobacco. Inuit there had developed their own vocabulary for the paraphernalia used in smoking, referring to cigarettes as “Mukpara-pai’pa”—“paper pipe.” 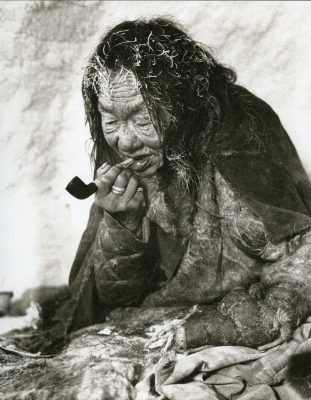 A Padlimiut woman, who is starving, smokes her pipe in 1950. (Harper collection)

Historian John Bockstoce has documented the eastward expansion of the fur trade from the Bering Strait to Canada, and with it the movement of trade goods, including tobacco. He has written that, sometime before 1889, a group of Alaskan Inuit travelled from Point Barrow to Cape Bathurst, at the entrance to Amundsen Gulf, east of the Mackenzie Delta, and met with Inuit there. When the Alaskan Inuit returned to Point Barrow, traders there decided to extend the hunt for bowhead whales eastward, resulting in the discovery of a favourable harbor at Herschel Island. It quickly became a whaling and trading centre. References to tobacco as a trade good are numerous. To note just one, in 1900 a whaler from Herschel Island recorded acquiring a wolverine skin at Baillie Island in return for three bottles of whiskey and a little tobacco.

Danish trader Christian Klengenberg was the first qallunaaq to make contact with the Kangiryuarmiut, a group of northern Copper Inuit on the west coast of the Wollaston Peninsula on Victoria Island, south of the present community of Holman. With him on his ship, the Olga, he had his crew, three western Inuit families, his wife and three children. The group wintered there.

One day the three western Inuit men were tending their traps when a travelling group of Inuinnait arrived. They had never seen outsiders before. While the men of both parties were talking, one of the western Inuit, feeling it was time for a smoke, nonchalantly filled his pipe with tobacco, took out a match, and lit it. The Inuinnait knew nothing of tobacco or matches and assumed that the westerner had magical powers. They turned and fled as fast as they could. To add insult to injury, the western Inuit fired their guns close to them “to make them go faster!” This was the frightening introduction of tobacco to the Inuinnait.