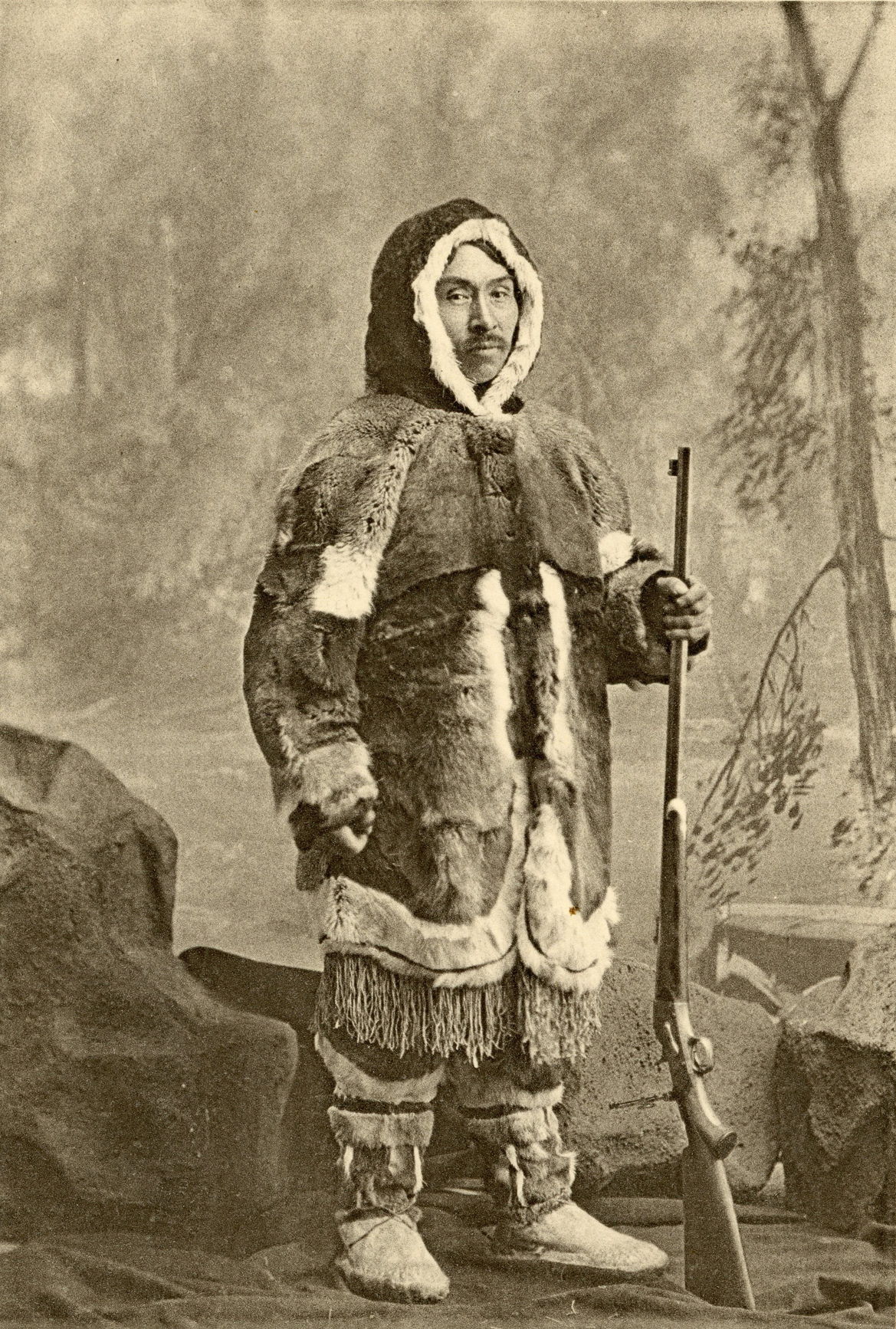 Joe Ebierbing, the Inuk from Baffin who spent many years travelling with explorers, working as a guide and interpreter. (Harper collection)

Santa Claus comes to the Aivilingmiut

In 1878, the last of the American Franklin search expeditions left New York, bound for Hudson Bay.

Sponsored by the American Geographical Society and financed on a shoestring budget, the party travelled aboard a whaler, Eothen, which landed them at Camp Daly, just north of Chesterfield Inlet, where they passed their first winter.

This was indeed a small expedition. Its leader, Frederick Schwatka, was an American army officer.

He was accompanied by William H. Gilder, a correspondent for the New York Herald; Heinrich Klutschak, a Czech artist and surveyor; another American named Frank Melms; and the famous Inuit interpreter, Joseph Ebierbing, whose Inuktitut name was really Ipiirvik, but who was universally known as Eskimo Joe.

Joe quickly became friends with the Aivilingmiut, a number of whom made camp near the white newcomers. They had heard of Joe’s reputation from his earlier travels in Hudson Bay with Charles Francis Hall.

His wife, Hannah, who had accompanied him on those earlier expeditions, had died in the United States two years earlier, and Joe found a new wife among the Aivilingmiut shortly after his arrival.

Joe was a hunter who doubled as an interpreter, although his English was rough, despite his many years of travelling with explorers. The white men’s knowledge of Inuktitut was as rough as Joe’s knowledge of English, and the account of this remarkable Christmas is riddled with the type of pidgin that often characterized meetings between Inuit and whalers or explorers.

Joe travelled and hunted with his new family that fall, and returned to camp just three days before Christmas. Accustomed as he was to life in the south, he was anxious to celebrate Christmas among his white companions, at the same time wanting to show off some of his knowledge of a southern Christmas to the Inuit.

As the writer, Gilder, expressed it, “Joe had explained to his companions this periodical generosity of white men which broke out in midwinter, and they, too, were anxious to be on hand when the giving commenced.”

Joe asked Schwatka if “any man he hang he stocking?” Schwatka told him that there would be no hanging of stockings this Christmas.

But Gilder hatched a plan. After Joe and his wife had gone to sleep, he got Tulugaq to pilfer one of Joe’s stockings and one of his wife’s, explaining that he wanted to play a joke on Joe.

The stockings were loaded with gifts in Schwatka’s snowhouse, then replaced under Joe’s caribou skin blanket.

In the morning Joe complained that one of his stockings was missing. When he discovered it, he pulled from it a frozen rabbit, a jack-knife, some matches and tobacco, bullets, caps and powder, and finally a fine-toothed comb.

His wife found her stocking stuffed with hard-tack, a paper of needles, some thread and a thimble. Then the joke was on Tulugaq, when he discovered one of his own stockings and his wife’s stuffed with the same articles.

Joe remarked, “I guess Santa Claus come this side, anyhow,” and tried to explain to the perplexed Aivilingmiut who Santa Claus was.

But the Inuit would have none of it. The gifts, they insisted, came from Lieutenant Schwatka and William Gilder.

But Joe still thought something was missing. “No likee Keesmiss without Keesmiss Tree,” he complained. The artist, Klutschak, reassured him, “Never mind, Joe. Watchow Santa Claus kyete.” (“By and by Santa Claus will come,” Gilder remarked parenthetically.)

In the afternoon Klutschak paid a surreptitious visit to a man named Armow in the local village. About an hour later, a sled drawn by a dozen dogs raced towards Schwatka’s camp.

It was guided by a big man clad in white fur robes, urging his dogs on with a booming voice that let everyone know that it was Armow himself.

“The sled stopped at the door of our tent,” wrote Gilder, “and up jumped Armow, covered from head to foot with a huge polar bear skin. On the sled were two large bags made of walrus hide, from one of which this Arctic Santa Claus took handfuls of hardtack which he scattered right and left among the crowd as preliminary largess. The delighted natives scrambled for these pieces of ship’s biscuit with as much pleasure and avidity as ever a crowd of civilized urchins did for candy or money.”

“When this part of the performance was concluded he opened the other bag, and calling in a loud voice, ‘Iggaaktualuk,’ which is Lieutenant Schwatka’s Eskimo name, handed out a handsome brand-new suit of fur clothing to our astonished and delighted commander.”

Armow proceeded to hand out a new fur suit to every white man in the party. Then there were gifts for every member of the Inuit community: hunting knives, snow knives, tobacco and ammunition for the men, and knives, needles, thread, thimbles and matches for the women.

The visit of this Arctic Santa had been surreptitiously arranged, probably by Klutschak with the help of Joe, who longed for a southern Christmas.

Other activities marked the day. A target shooting match was organized. Then the white men visited the Inuit in their homes and took part in their games.

Finally, the day was topped off with a dinner of boiled char with melted margarine sauce, fried caribou steaks, pork and pancakes.

“Taken altogether,” wrote Gilder, “there never was another such a Christmas Day in Esquimaux Land.”