The Labrador pandemic of 1918 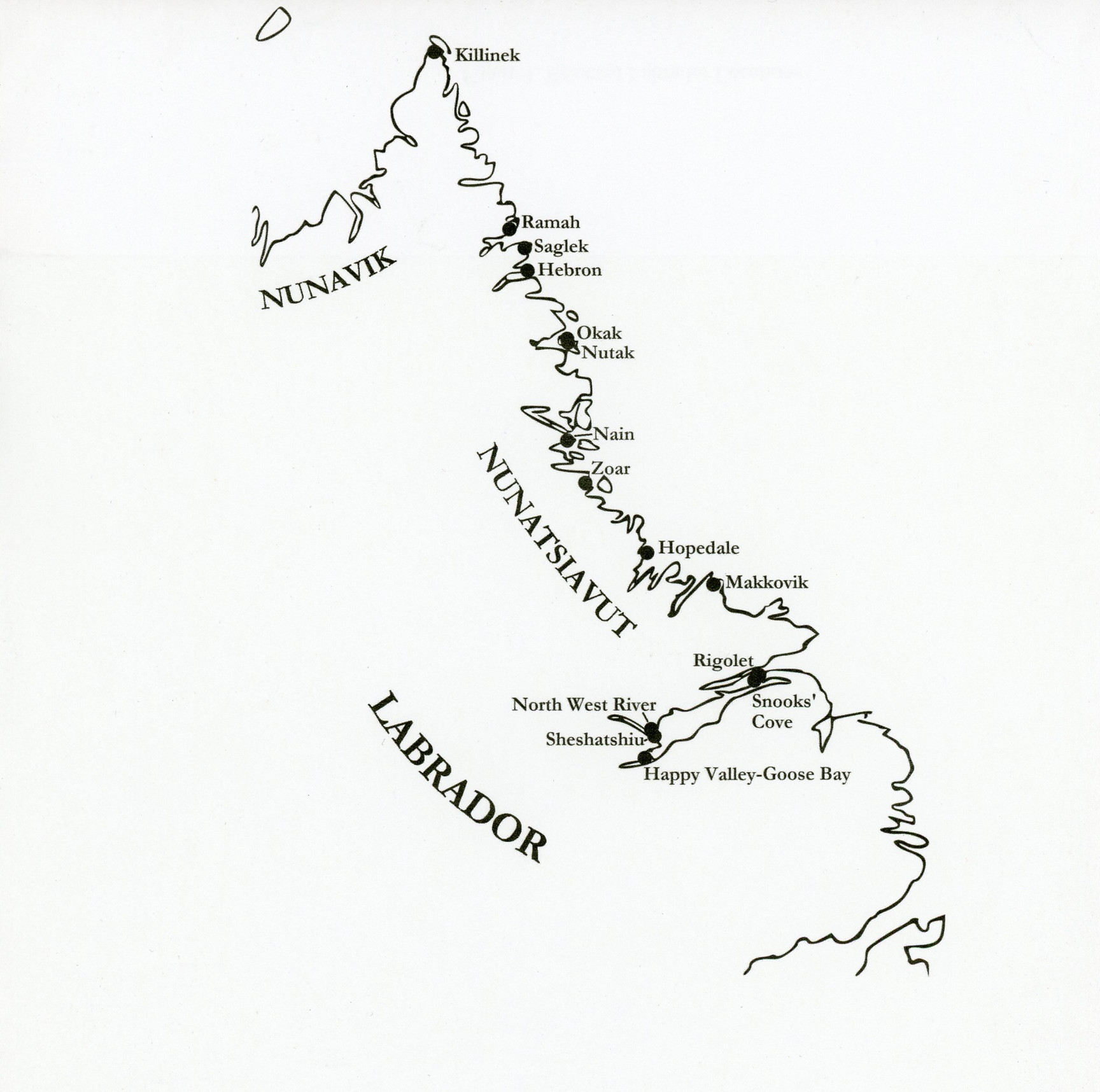 This map shows the locations of various places in northern Labrador. (Harper collection)

Warning: This Taissumani story, about the terrible events of 1918-19 when a pandemic struck the Inuit of Labrador, includes details that some readers will find distressing.

It is a story that should be known to all, for it is a cautionary tale, and a tragic part of northern history.

As the First World War was coming to a close in 1918, another killer, which was far more deadly, swept the world. It began, or at least got its foothold, in the filthy trenches of war-torn Europe, and is known today as the “Spanish flu”—not because it started in Spain (it didn’t), but because Spain, as a neutral country, was the first to provide uncensored reports on it to the world.

The war killed millions—most estimates are slightly in excess of 20 million—but the viral killer that followed was worse: it took the lives of between 50 and 100 million people worldwide.

It was a pandemic—a word we have learned in the last few weeks—and it was lethal. It was unlike COVID-19 in that it struck quickly, usually attacking healthy people in the prime of their lives.

Nowhere was the pandemic of 1918 more deadly than in the isolated Inuit communities of northern Labrador. Elsewhere the flu had hit in waves, and the second wave was more deadly than the first.

But northern Labrador was spared the first wave, because shipping on that coast did not open up until July. That meant that the population had no immunity to the ailment when the second wave hit.

A modicum of immunity would not have meant that no one would die, but it might have meant that fewer would perish. And so it was the deadly second wave (the first for the north Labrador coast) that did so much damage to the isolated population.

Ironically, the illness was brought to the coast by the Moravian mission supply ship from St. John’s, the Harmony, on its final trip to the coast that season.

(Another freighter, the Sagona, brought its deadly flu cargo to Cartwright, from where it spread to Rigolet and the Upper Lake Melville area. I do not mean to downplay the tragic consequences of that voyage, but this article will focus on the north coast.)

On Oct. 20, 1918, the Harmony left St. John’s and, because of the lateness of the season, headed directly to Hebron. Nobody on the coast knew that an influenza epidemic was raging in St. John’s.

The vessel, under the command of Capt. Jackson, reached Hebron on Oct. 27. Jackson knew that he had a sick sailor aboard and warned the Inuit not to go to the front of the ship while unloading.

Some didn’t heed his warning. He also apparently alerted the resident missionary, who, it seems, did nothing to keep the Inuit away from the ship.

The first death was a child who passed away on Nov. 7, three days after the ship had departed for Okak. After that, more died daily. Bishop Martin wrote in his diary on Nov. 22 that, of the 100 people who had been at the mission station when the disease broke out, “85 were snatched away in one week.”

And he posed the fearful question, “Is this the end of our Labrador Eskimo?”

More Inuit died in their hunting camps, to which they had returned after ship-time. The records of their deaths make grim reading.

A seven-year-old girl was left alone with a small child in a house when her parents and grandparents died. “My grandfather died first,” Martha Joshua recalled, “early in the evening just after he came in the house, after he had chopped the wood. My grandmother died while she was sewing … she just slumped over and died on the bed.”

Interviewed for Them Days magazine many years later, Joshua remembered:

“I stayed in that house for three months. I ate biscuits—hard bread—and eating just a little at a time…. The little boy who was with me lived for quite a while…. I didn’t know how to feed him…. I had him on my lap for a while, then I put him down beside me when it was getting dark. As soon as I put him down he was taken by a dog and torn to pieces….”

The few able-bodied men left had to shoot the dogs, ravenous because their owners were either dead or too weak to feed them. Bishop Martin reported that “after all the inhabitants of some houses died away, the dogs broke into the huts and ate some of the bodies.”

The corpses had to be disposed of, but there were too few men well enough to dig proper graves. As a result, many were buried at sea. Others were burned along with the houses they had died in.

On Nov. 4, the Harmony reached Okak. Four days later it left, after many of the crew had been ashore the night before for a celebratory dance. That served only to spread the sickness. Maggie Saunders told Anne Budgell in 1979:

“I remember a woman coming in one morning and saying she was cold and she had a blanket wrapped around her and she asked could she sit beside the stove and warm herself and she lied down by the stove, a wood stove in them days, and she died there, just like that. And there was … this man who cut up wood come in and brought in the wood and put it down and he lied down by the stove, to warm up, he said he was feelin’ sick. He lied there and died there!”

And there too the dogs were a problem, devouring many of the dead. The devastation was not confined to Okak, for the neighbouring camps also suffered a number of deaths.

In all, in the Okak Bay region, 207 people died. By one account, only 59 people, almost all women and children, remained alive in Okak.

Moravian Superintendent Walter Perrett arrived in Okak from Hopedale and took control. The remaining people would be relocated to Hopedale and Nain. The move took place immediately, by dog sled.

Tragically, many siblings were separated—sent to different camps to live with new families. Friendships ended. People’s lives were shattered. Okak was abandoned. Hebron struggled on for four more decades before it too was abandoned in 1959.

There is much more to this story than can be included in one article. So I’d like to point out three sources if you are interested in knowing more. 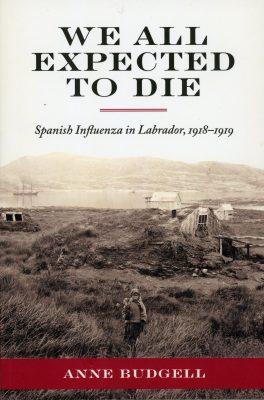 In 2018, St. John’s-based journalist Anne Budgell published this book on the Spanish influenza epidemic in Labrador.

A St. John’s-based journalist, Anne Budgell, published a touching book on this episode in Labrador’s history in 2018. “We All Expected to Die: Spanish Influenza in Labrador, 1918-1919” is a heart-breaking but necessary read.

In that same year, Them Days, an admirable publication that documents and preserves “the old ways and early days of Labrador” published an issue, A War of Our Own: Spanish Flu, 1918-19, devoted entirely to exploring this subject.

I highly recommend both these publications on this tragic episode in our poorly known history. Anne Budgell and Nigel Markham also made an excellent film, “The Last Days of Okak,” in 1985 for the National Film Board of Canada. It is simply heart-wrenching.

Let us hope that in the current pandemic we are all spared the horror that the people of Labrador endured a century ago. Coincidentally, Anne Budgell’s book is introduced with a message from Dr. Theresa Tam, chief public health officer of Canada, who has become a familiar face on our televisions in the fight against COVID-19.

She writes: “We cannot predict whether a pandemic of the same magnitude as 1918 will occur again; however, historic accounts such as this one highlight the impact of individual and societal factors on influenza severity. Time has not erased these health and societal disparities, and if we are to be better prepared for the next pandemic, they are as important to address and plan for as are diagnostics, vaccines, and antiviral treatments.”

Are we better prepared?