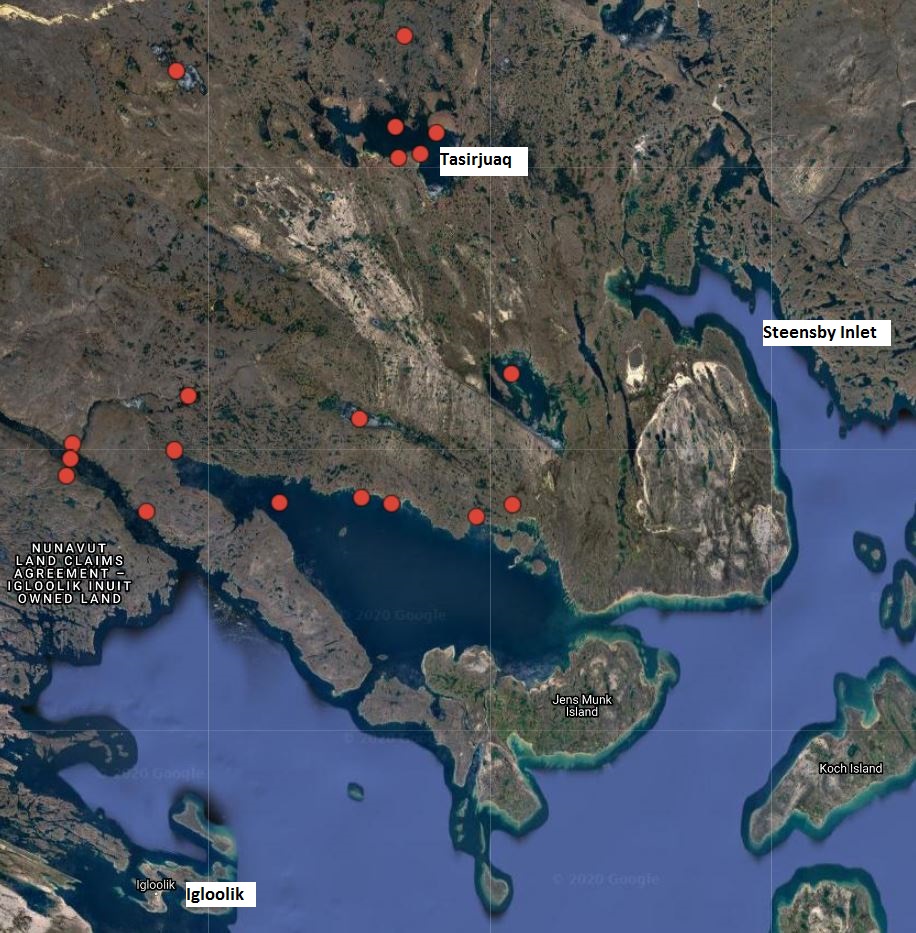 This map, annotated by Kenn Harper, shows the location of Tasirjuaq, the lake where the Tuniit spyglass may be found. (Image courtesy of the Inuit Heritage Trust)

There are many fascinating tidbits of information to be found in the reports of the Fifth Thule Expedition, an ethnographic venture that documented the lifestyles and beliefs of Inuit in northern Canada in the early 1920s. One such is a brief reference to a “spyglass” in Baffin Island northeast of Igloolik.

An overland route leads from Steensby Inlet on the Baffin coast of Foxe Basin northward to Milne Inlet, from where travellers continue by ice to the Pond Inlet area. In historic times, these trips were made for the purposes of trade with whalers who frequented the waters off northern Baffin Island and Bylot Island, while the waters of Foxe Basin were still unexploited by Europeans.

Near the southern end of that route is a large lake, known to the Inuit as Tasirjuaq. It appears on maps made by southerners as Erichsen Lake. Powerful taboos govern activities that can take place near that lake. Women are discouraged from travelling there, and if they do, they are told they must not look about in the area or they will become afflicted with a kind of snow blindness in which their eyes water continually and they are unable to see anything.

This entire area is steeped in caribou lore. If a hunter kills a caribou near the lake, he must follow the same taboo behaviour as would a man who has lost his sister—the caribou skin must be dried and then stored unused for a time.

Just north of Tasirjuaq is a lake called Maleruarvik. At this lake, legend says, Inuit once followed some caribou for two days until the caribou, on reaching the lake, were so tired they could move no further, and were taken.

A little to the northeast is another lake, Ikiqtuuq. On most maps it is called Inuktorfik Lake—the lake where cannibalism occurred; it is the location where Ataguttaaluk survived starvation by eating her own family in the spring of 1905 on a disastrous return trip from a trading excursion to Pond Inlet.

Still a little further to the north is Nuluujaak, visible from a long distance away, two hills so named because they resemble buttocks; this is the present mine site of Mary River.

In Inuit tradition, there is a reason for the beliefs surrounding Tasirjuaq. Two brothers were once attacked by enemies on the shores of the lake. Only the younger survived, and he continued to live there, hunting caribou for himself. Because he was alone, he had to prepare his own clothing, which was women’s work, and this is the reason for the strong taboo against women at the lake.

A man and woman of the legendary Tuniit, who are thought to be pre-Inuit of the Dorset culture, also lived on the shores of this large lake, and were called the Tunaluit. People said that when the husband saw the lone hunter he was frightened and ran down to his kayak so energetically that he left deep tracks behind him in the ground. One can still see these tracks, sometimes more clearly than on other occasions. When the tracks are particularly conspicuous, hunters know that it will be a good year for caribou.

Somewhere near the lake, there is a large piece of mica containing specs of orsuriaq or quartzite, which can shine in the dark. Long before the days when Inuit acquired telescopes from whalers and traders, with which to scan the horizon for game, it is said that the Tuniq hunter looked through this stone and it allowed him to see far-away caribou that were invisible to the naked eye. Inuit told the ethnographer Knud Rasmussen in 1922 that this Tunaluk “spyglass” was still to be seen on the shores of the lake.

The spyglass was still remembered in 1997 when an elderly Igloolik woman, Iqallijuq, recorded an interview for the Igloolik Oral History Project. As a young woman she and her family had camped at Anaqtaqtuuq in the spring and went inland caribou hunting. The men took their kayaks with them to hunt the migrating caribou. Iqallijuq recalled that there was an outcrop of mica, which she called by its Inuktitut name qillaqiaq, across the lake. It must have been quite large, because she said, “I never approached it; I could only see it from a distance.” But she added that people were able to see caribou through it.