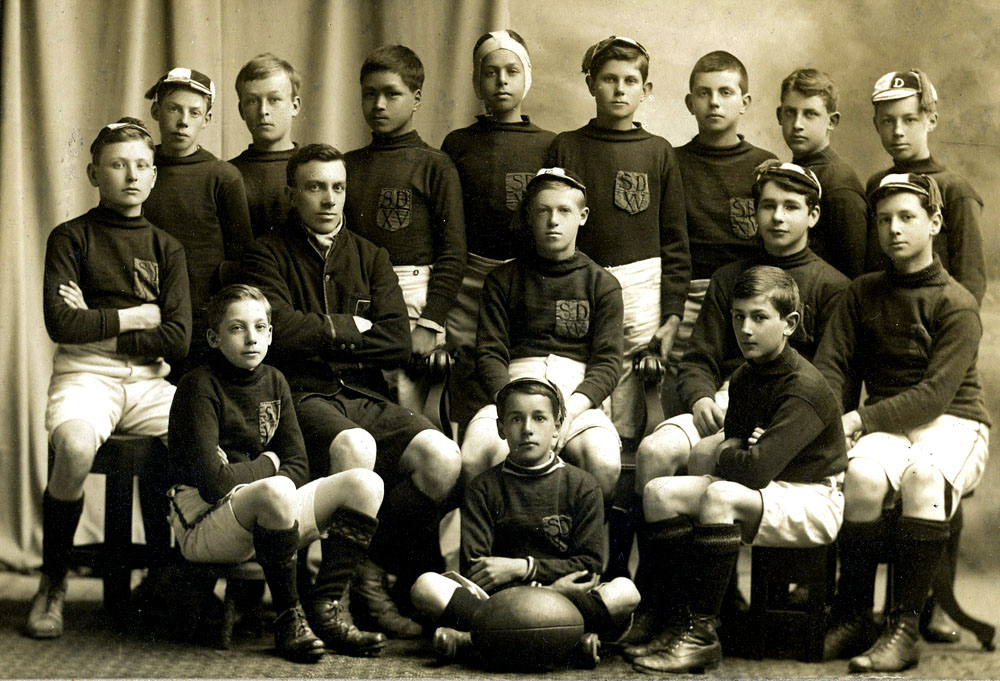 The Bishop Feild College rugby team. Matthew Aupalok is third from the left among the boys standing in the back row. (Harper collection)

While I was researching in the archives of the Anglican Diocese of Eastern Newfoundland and Labrador in St. John’s a few years ago, the archivist, Peter Chalker, was kind enough to show me a photograph that was normally stored in the basement.

It was of a handsome Inuit boy posed with a rugby team. On the back of the photo, the boy was identified as Matthew Aupalok. 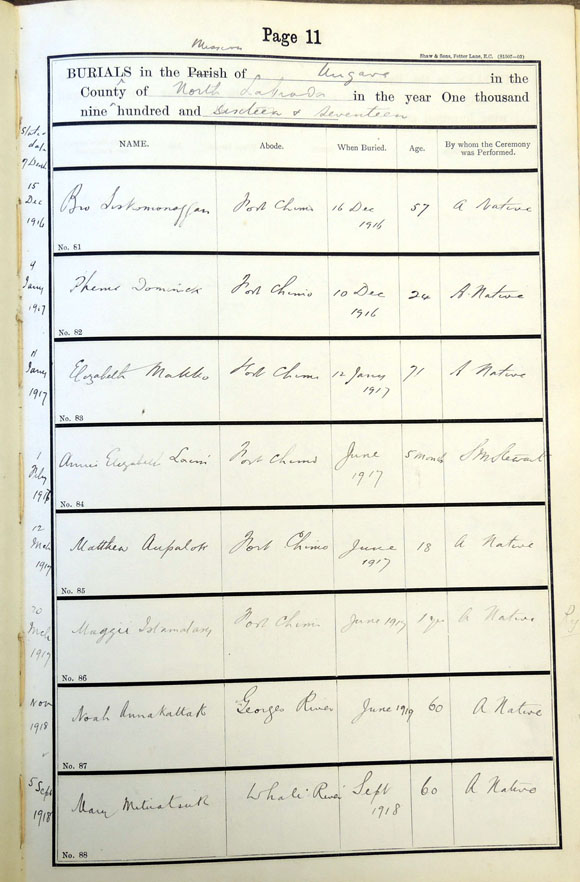 Page with Matthew Aupalok’s burial record, from the archives of the Anglican Diocese of Eastern Newfoundland and Labrador in St. John’s. (Harper collection)

There was no other information accompanying it. I had never heard of Matthew Aupalok before, but coincidentally, on the same day, I discovered his burial record.

I was intrigued, and wanted to fill in the gaps in this unknown life. Here is the result of my search.

In about 1907, a group of Inuit from the Hudson Bay coast visited Fort Chimo (now Kuujjuaq) to trade. Their journey was difficult and a number of them, weakened by their ordeal, died soon after arriving.

Among them was a man and wife who left behind two children, a boy and a girl. The girl—whose name is unknown—was adopted by relatives. The boy, Aupalok, was taken in by the Rev. Samuel Milliken Stewart, the Anglican missionary there.

Stewart thought him “a bright little fellow” and wrote, “I took him into my house to educate and train, in the hope that one day he might become a Missionary to his own people.”

Aupalok did well and was soon able to assist Stewart in the day school that he operated. He travelled extensively with the missionary on his visits to Inuit camps.

In 1913 the two of them left Fort Chimo by dogsled on a 99-day journey, travelling to the Labrador coast, and then south, until they were able to take passage by ship to St. John’s. There the teenager was baptized in the Anglican cathedral on St. Matthew’s Day, and took the Christian name Matthew.

“We were not out of our teens at the time but we well remember the coming of Matthew Aupalok to Feild. We all eyed him with the unveiled curiosity of youth. A short and sturdy lad, he had the merriest face that any of us had seen. He was gifted as well. He learned English quickly. He drew with remarkable talent. He could carve well in wood.”

But of all the young man’s attributes, the one that made the greatest impression on Aupalok’s classmate was his proficiency with the whip —“the Eskimo whip” as he called it.

Aupalok was “a master of its use.” With it, he could hit a target with accuracy. Before long, the student recalled:

“Not only the boys, but the masters as well had equipped themselves with whips as nearly similar to Matthew’s, as each one’s resources could contrive.” 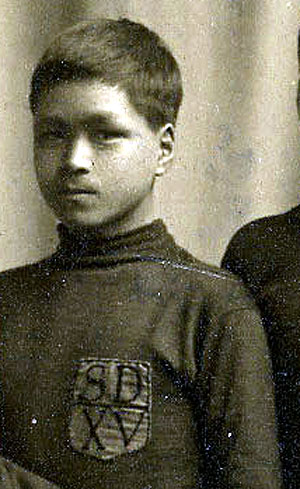 At that time rugby had been introduced to Feild, and quickly became more popular than cricket. “Aupalok was among those of us who went through the Easter holidays of 1914 learning the elements of rugger in the C. L. B. Armoury,” wrote a student, adding, “Aupalok took to rugger like a duck to water.”

Aupalok completed his studies in St. John’s successfully. It was decided that he should return to Fort Chimo to assist Rev. Stewart in his mission.

In 1916, Rev. Edmund James Peck, a veteran Arctic missionary who had served in Hudson Bay before opening the Blacklead Island mission in Cumberland Sound, was in Montreal to board the Hudson’s Bay Co. supply vessel Nascopie for a summer visit north.

In early August, he met Matthew Aupalok there, waiting for the same ship. Peck noted that the young man “does not seem strong.” With his usual missionary zeal, Peck added that he hoped “he may be strengthened in body and soul and finally become a messenger for his own people.”

Aupalok left the ship at Port Burwell on August 18—he would proceed to Fort Chimo in a small schooner. The Nascopie left Peck at Lake Harbour (now Kimmirut) on the Baffin coast but picked him up later in the season. On the last day of October he reached Fort Chimo.

It was almost a homecoming for Peck. He had been there 32 years earlier, on an overland trip from Hudson Bay. At that time there had been only six dwellings (there was a trading post there) and no mission.

Now, there were over 40 houses, the Hudson’s Bay Co. post, and a mission. Peck met Rev. Stewart there and saw Matthew Aupalok again; he noted that his health had improved greatly.

Of course, Peck needed no interpreter to talk with Inuit anywhere in the eastern Arctic, but, nonetheless, Aupalok accompanied him on a visit to a number of Inuit homes. Peck’s visit was short; a few days later he was back aboard the Nascopie, homeward bound.

At Fort Chimo, Aupalok worked with Rev. Stewart as a teacher and catechist, assisting the missionary in Sunday and other services. Stewart wrote, “He was an earnest student of the Bible, and was very keen about getting up an adult Bible class.”

He noted that Aupalok liked to “discourse with his elders who invariably crowded around him.” “He was,” Stewart wrote, “greatly loved by the whole community.”

But suddenly his health problems returned. The local doctor assured Stewart that “it was nothing, and with care and attention he would get well.”

But it was not to be. Matthew Aupalok passed away on March 12, 1917, with his friend, the missionary, kneeling in prayer by his bedside. He was just 18 years old.

Frozen ground prevented an immediate burial, and he was not interred until June. Strangely, the service was not performed by his friend, Rev. Stewart. The burial record says only that it was performed by “a Native.” Perhaps Stewart was absent at the time appointed for burial.

“…in him I have lost one of the brightest and best of colleagues, and I have no one to take his place permanently. The loss to the mission in general, and to me in particular is a serious one, and short as his period of service was, he had endeared himself to everybody, showed a true vocation, and in his brief tenure of office had done some good work.”

Stewart ended his written eulogy to the young Inuit catechist with a verse from a much-loved burial hymn composed by John Ellerton:

“Now the labourer’s task is o’er,
Now the battle-day is past;
Now upon the farther shore,
Lands the voyager at last.
Father in Thy gracious keeping,
Leave we now Thy servant sleeping.”

Eventually news reached St. John’s of his death. A classmate noted that schoolboys in their teens were generally an unsentimental lot, but that “most of us [who] knew Aupalok shed a tear at his passing.”