Joseph Idlout’s 10 uses for a seal 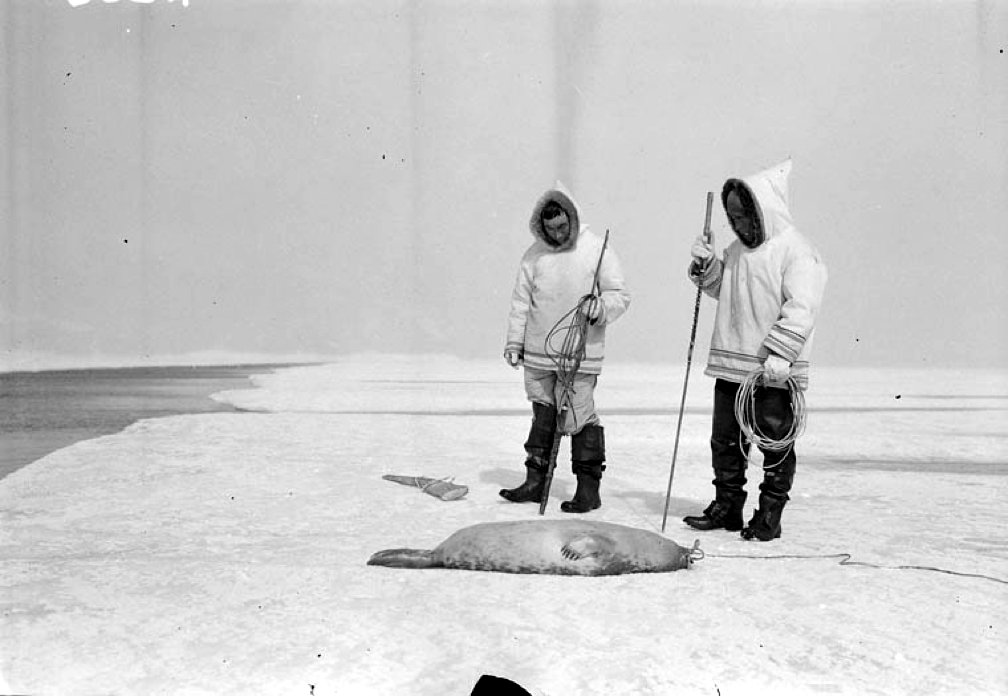 Joseph Idlout (right) with Herodier Kalluk (left) in 1951 with a seal they caught near Pond Inlet. (Photo by Doug Wilkinson/Wikimedia Commons/Public Domain)

Over the years there have been a number of collections of published writings by Inuit, but here is one interesting letter that has, I think, escaped notice.

Joseph Idlout was a well-known Inuit hunter and leader. Originally from a camp near Pond Inlet, he moved to Resolute Bay in 1955.

A few years later, he wrote a letter to Bob Williamson, who translated it. Bobby Inuktitusuuq, as he was known to Inuit, was head of linguistic services for the welfare division of the Department of Northern Affairs and National Resources.

In his undated letter, Idlout told his friend that he thought there would be fewer foxes during the coming winter, so “I do not think my pipe will be full.”

He was balancing wage labour for the air force with hunting whenever time permitted, recalling that:

“When I used to live in Pond Inlet, I used to catch about 200 seals in one whole year, but nowadays I have not been getting enough because I am becoming an old man.”

He commented that “the seal is the most useful thing that the Eskimos use in our land… We all know the 10 commandments consist of 10, and that is how many uses a seal has too.”

Idlout then gave his 10 uses for the seal:

1. We use the seal as our food, by boiling it, eat it raw, eat it frozen, and also use it as dog food; … these are our only food, so we eat it with delight with our eyes closed when it is boiled.

2. The oil from the fat is used on the kudlik (oil lamp) and if you get one big seal, the oil will be enough for five days. The other uses are also to grease the sealskin ropes and also it was used to wash faces by our ancestors.

3. The seal’s skin is the most useful part of all with the fur taken off because we use it as boots, taking out the fat membrane and leaving the outer black membrane on it, and also it is useful for the use of mitts. By leaving part of the fattish membrane on, we can make use of it as a harness for the dogs, and also it can be used as a rope to tie and pack up the sled.

4. When you soak the skin in water, it makes a good boot and very good mitts when the black membrane is taken off, making it white, and also without the fat membrane on it; also the parts of the seal’s skin are used as a long string to tie parts of other ropes together.

5. Also without the fur, the whole skin taken off carefully from the seal can be blown up and used as a float for the kayak. The float can also be used as a fat container for oil. The skin can also be used for a rope for tying parts of the sled together to make it strong and flexible.

6. The skin, when it is aged and half decayed and the fur taken off from being in the water, can be used to make kayaks and umiaks (boats.)

8. When fur is not taken off, we use the skin as pants, parkas, mitts and boots without the fattish membrane, so this also is very warm.

10. The parka, when it is made from the baby seal’s fur, is very good and attractive to look at. When the fur is close to the skin, on the pants, it is very warm.

Perhaps the reason why this piece by Idlout has escaped the notice of anthologizers of Inuit writings is because Bobby had it published, for reasons known only to him, in an extremely obscure journal: Plywood World.