Robert Stein — How Not to Explore the Arctic 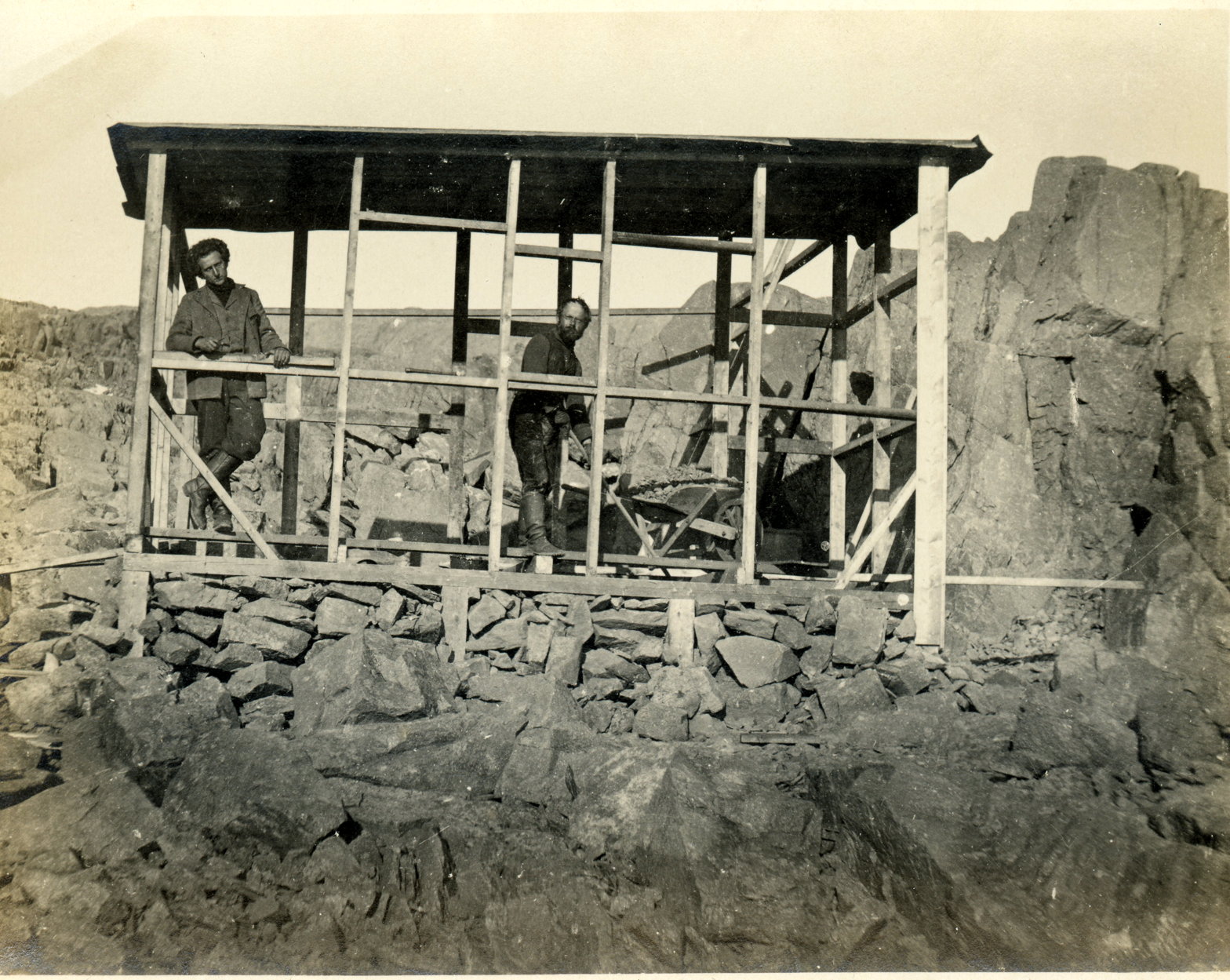 German-born Robert Stein was a most eccentric man. After emigrating to the United States, he studied for the priesthood at Georgetown University. Sidetracked, he ended up with a medical degree. Somewhere along the way, he learned 12 languages. 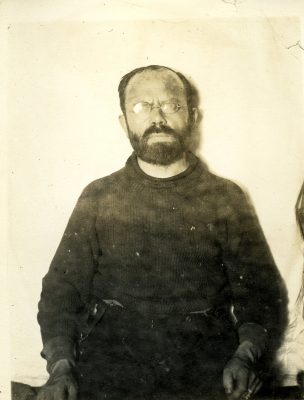 Perhaps this explains why he never found time to marry. Instead, he buried himself in historical and ethnological research, and worked for the United States Geological Survey as a translator.

Stein became interested in Arctic exploration. In 1896 he published his “Proposed System of Continuous Polar Exploration,” a plan “to establish a permanent station at the entrance of Jones Sound … and from there carry on scientific explorations … as far as can be done with safety.”

This would put Stein’s station in Canadian territory. But Canada showed little interest in the High Arctic in those days.

Ironically then, Stein would need the support of American explorer Robert Peary. In 1897 he tested the waters by accompanying Peary to northern Greenland on a summer voyage.

Two years later, Stein returned to the Arctic aboard the Diana, a vessel chartered to take supplies north for Peary, who had gone back to Greenland in 1898.

Stein was accompanied by two men, Julian Warmbath, an American taxidermist and photographer, and Leopold Kann, a 25-year-old Austrian, a graduate of the University of Vienna in mathematics, physics and philosophy; Kann would be in charge of their meteorological program.

The Diana deposited the men at Payer Harbour on Pim Island, about halfway up the eastern coast of Ellesmere Island. There, they built their winter quarters, Fort Magnesia, named for a company that had provided the insulation for the building. 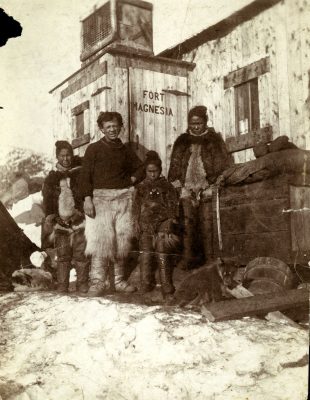 Their first winter cannot have been very comfortable. Despite its grandiose name, Fort Magnesia was nothing more than a shack. At five metres long and four metres wide, it was slightly smaller than a “matchbox house,” which not-so-young Inuit readers will remember from 1960s government housing programs in the Arctic.

The winter was also lonely. Peary considered the entire High Arctic to be his territory, and he did not like other explorers encroaching on his domain. The fact that he provided passage to Stein at all may mean that he considered him more scientist than explorer, and therefore not much of a threat.

Still, Peary exacted a promise from him, an “express agreement … that we would have no dealings with the natives….”

There was very little danger of that—there were usually no Inuit living on Ellesmere Island except those whom Peary took there as support for his own expeditions. The occasional hunting party crossed Smith Sound from Etah, and eventually some visited the camp.

The first group of visitors arrived with three dog teams, the unaccustomed noise of which frightened the three men in the shack. They had heard stories of fierce and even cannibalistic Inuit and didn’t know what to expect. Kann flung the door open and stepped outside brandishing a revolver in each hand.

The Inuit must have been astonished at this greeting, and Kann may have been embarrassed about his actions. He invited the Inuit inside and the two parties became friends.

The winter was dark. At that latitude, the sun disappeared for 126 days, going down in mid-October and returning in late February.

In 1900, the New York Herald carried an article, “Stein’s Extraordinary Arctic Expedition,” which suggested, “Chances are that the daring explorer and his party have been frozen to death.”

The article went on to claim that Stein, a self-styled Arctic enthusiast, was in fact “an Arctic crank,” and suggested that, were it not for the possible tragedy of the deaths of Stein and his men, his expedition should be viewed as “pure and unadulterated comedy.”

But Stein and his men had not perished. They were unable to carry out their ambitious exploration program, however, due to a lack of adequate dogs and supplies.

Leopold Kann had become disenchanted with Stein—or perhaps he couldn’t stand the thought of another dark winter in confined quarters. He decided to return to Europe in 1900.

This was much easier said than done. Travelling with Inuit, he sledded across the lower reaches of Kane Basin to the Greenland coast, and from there headed south to Cape York on Melville Bay.

Stein himself accompanied him that far, although the two men no longer got along. At the cape, Captain Milne of the whaler Eclipse picked Kann up and carried him to Europe.

Meanwhile, the Windward, coming north with supplies for Peary, picked up Stein at Cape York and returned him to Fort Magnesia. Peary’s wife, Josephine, was aboard the ship and commented on Stein’s presence: “I saw very little of him. He is as dirty and smells quite as bad as the huskies.”

Stein and Warmbath considered abandoning their plans in the summer of 1900 and leaving for home on the Windward—their supplies were almost exhausted. “Stein has had a taste of life aboard ship & I think he likes it,” Josephine wrote on Aug. 31, referring to the man’s trip from Cape York to Payer Harbour.

By the next day, the two men had decided that Warmbath would remain for another winter at Fort Magnesia, but Stein would return south. But any plan to vacate the north was nixed for all parties when the Windward was suddenly and unexpectedly iced in—the ship would have to winter in the Arctic.

Stein and Warmbath passed another winter at Fort Magnesia. It was not quite as cheerless as the previous one. The Windward’s presence attracted Inuit from Etah. And Julian Warmbath became good friends with Jospehine and her young daughter, who had accompanied her.

Josephine,Peary had come north hoping to be reunited with her long-absent husband. But Robert Peary was far to the north and did not even know of the Windward’s—and his wife’s— arrival until the following spring.

It was a difficult time for Josephine. At Cape York, the Windward had also picked up Aleqasinnguaq, an Inuit woman, and Josephine quickly became aware of her husband’s affair with the woman. She had, in fact, already borne a child by Peary, and, in years yet to come, would bear another one.

In a letter that Josephine wrote to her still-absent husband, she poured out her heartbreak at learning of his infidelity. “To think that she has been in your arms, has received your caresses, has heard your lovecries. I could die at the thought,” she wrote.

In her grief, she cast aspersions on Aleqasinnguaq’s character whenever she could, suggesting that Stein and Aleqasinnguaq had also had a romance. “She has been Stein’s ‘companion’ almost constantly on the trip [aboard the Windward] & when she was not on deck every one knew where she was always to be found,” she wrote.

Stein and Warmbath finally returned south on the Windward in the summer of 1901. Their expedition, grand in Stein’s hopes, had accomplished nothing. Arctic historian William Barr provided this assessment of it: “Stein’s expedition must be rated among the least effectual which ever crossed the Arctic Circle.” Historian Lyle Dick described it as “a farcical interlude in the saga of the polar quest.”

But Stein was not a man to languish in defeat. He knew he would never be able to put together another northern expedition, but instead of giving up his interest in the Arctic, he modified it. He proposed an equally impractical feat of Arctic diplomacy.

Next instalment – Stein’s proposal for Canada to acquire Greenland.