Thou shalt do no murder – a syllabic poster 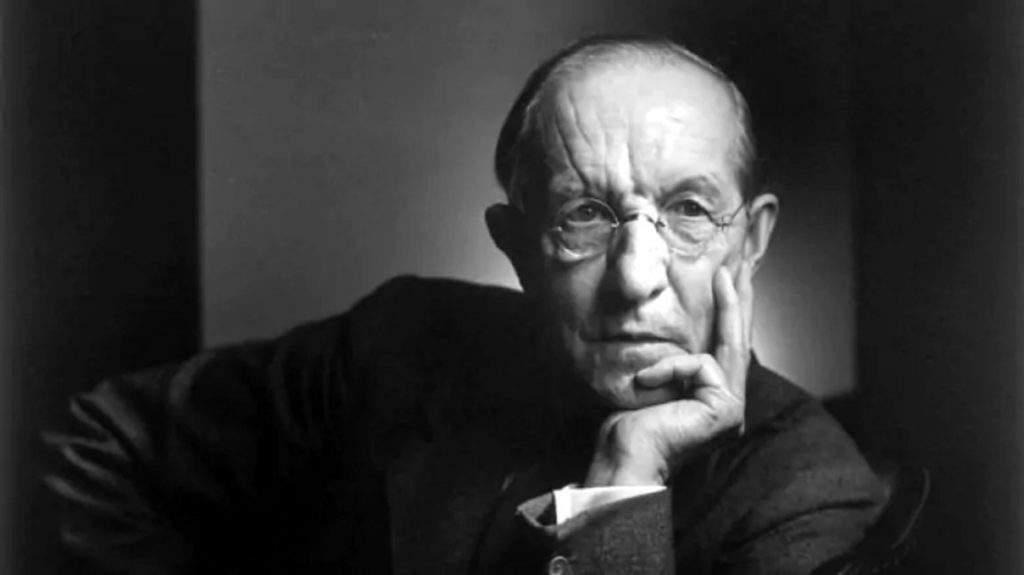 Duncan Campbell Scott, Canadian poet and bureaucrat, was one of the administrators of the residential school system. He authorized the publication of the Thou Shalt Do No Murder poster. (Library and Archives Canada)

In the early years of the 1900s, a number of killings committed by Inuit had caused concern in Ottawa.

Belated reports of the killings of adventurers Harry Radford and George Street by Inuit in the Bathurst Inlet area in 1912 had resulted in a police patrol that finally reached the area in 1917. A cursory investigation had ensued, but no charges were laid.

In the meantime two men, Sinnisiak and Uluksuk, had murdered two priests, Father Jean-Baptiste Rouvière and Father Guillaume LeRoux, near Coronation Gulf in 1913.

The culprits were arrested and eventually tried and convicted of murder in 1917. They were sentenced to death, but their sentences were commuted.

In the eastern Arctic, in 1920, a Newfoundland trader, Robert Janes, was killed by an Inuk, Nuqallaq. At the trial which followed three years later, Nuqallaq was convicted of manslaughter and sentenced to prison in southern Canada.

Meanwhile, back in the western Arctic, in 1921 two men, Alikomiak and Tatamigana, were arrested by Corporal William Andrew Doak for the murders of a number of Inuit.

The RCMP had established a detachment there three years earlier. A trial ensued at Herschel Island in 1923. The two Inuit were convicted, and were executed the following February, the only Inuit to ever be hanged in Canada.

You may have noticed that most of these high-profile cases involved Inuit killing white men. The government and the public seemed to take far less interest in murders of Inuit by their fellow Inuit.

And there were a number of those as well, few of which were brought to trial.

The rapid cultural change that had occurred with the arrival of whalers, traders and other outsiders, especially in the western Arctic, had had a destabilizing effect on Inuit society, and killings and social unrest were the result. 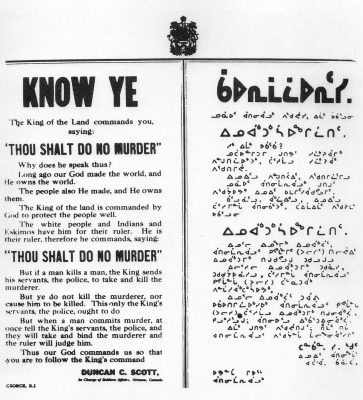 A poster published for Inuit by the Canadian government in 1925, urging them not to commit murder. (Click to enlarge)

After the sentencing of Nuqallaq in the east, and the hangings of Alikomiak and Tatamigana in the west, the government decided that it should do something to spread the knowledge that murder was not an acceptable way to resolve disputes, and would be punished under Canadian law.

Accordingly, a poster was prepared, of which the Department of the Interior, a branch of the Canadian government, sent copies north in 1925, so that they could be displayed prominently at police detachments and trading posts.

As scholar Richard Diubaldo summarized in a report written for the Canadian Government in 1985, “The government hoped that posters in Inuktitut might dissuade Inuit from taking the law into their own hands.”

The text was simple.

It began, “”Know Ye. The King of the Land commands you, saying: ‘THOU SHALT DO NO MURDER.’”

It then poses a question, “Why does he speak thus?” and answers with a confusing lesson in civics, along with a heavy dose of religion:

“Long ago our God made the world, and He owns the world. The people also he made, and He owns them. The King of the land is commanded by God to protect the people well. The white people and Indians and Eskimos have him for their ruler. He is their ruler, therefore he commands, saying: “THOU SHALT DO NO MURDER.”

The text then continues and, in fact, conveys some false information about the role of the Royal Canadian Mounted Police:

This bizarre message was issued under the authority of Duncan C. Scott above a notation identifying him as being “In Charge of Eskimo Affairs, Ottawa, Canada.”

Duncan Campbell Scott was the deputy superintendent of the Department of the Interior from 1923 to 1932. He is much reviled by many Indigenous people because he believed fervently in their assimilation—so reviled in fact that his grave marker in Beechwood Cemetery in Ottawa was often defaced.

The man was an enigma. He was one of Canada’s best-known poets who wrote sensitively about the Canadian landscape and even composed touching poetry about Canada’s First Nations, yet simultaneously he was a bureaucrat and an administrator of the country’s residential school program who wrote callously that the government’s goal was to “kill the Indian in the child.”

When informed of the high rates of disease in residential schools, he refused to take any action, saying that this was part of the “final solution of our Indian problem.”

So it would be easy to ridicule Scott for the patronizing text of the poster. Yet he did not write the text; he merely authorized it, and approved and directed its circulation.

The words were written by a missionary, Rev. Charles Edward Whittaker of the Anglican church, a man of many years’ service in Arctic missions in the western Arctic, including a stint at Herschel Island, where Alikomiak and Tatamigana were hanged.

Whittaker believed that the wording he suggested would resonate with Inuit because they would “recognize authority more quickly than reason … based on the command of Original Authority.” In other words, invoking God’s name would convince Inuit to follow the commands of the poster.

The text was translated into Inuktitut, and printed in syllabics and English on durable sailcloth, 18 inches square. A separate version was published in English and the alphabetic orthography used in western dialects.

One officer, the inspector of the Arctic Sub-District in Aklavik, objected to the statement that the police would “take and kill the murderer.”

He complained to Ottawa that a suspected murderer who read this might resist arrest, feeling that his own life was in jeopardy, and thereby endanger the lives of arresting officers. He suggested a change in wording that removed this thought, but not the patronizing tone of the message as a whole:

“If a man kills a man, the King sends his servants, the Police, to take away the murderer, and bring him before one of the white chiefs, who will hear how the murder was done, and will punish the murderer, if he thinks he is a bad native.”

His suggestion was never adopted. Unfortunately, any reaction Inuit may have had on reading these bizarre posters was never recorded.