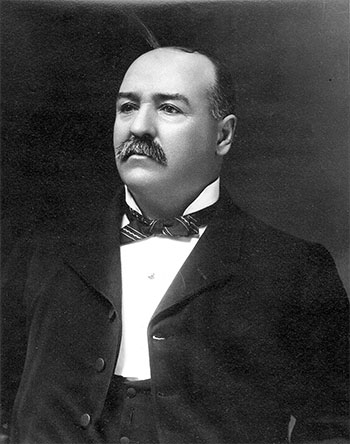 Joseph Bernier, the renowned Canadian explorer, first became interested in the Arctic in 1871, after he observed Charles Francis Hall’s ship in drydock.

Joseph Bernier was born in the French-speaking village of L’Islet in Quebec on the southern shores of the St. Lawrence River on New Year’s Day, 1852.

It would have been surprising had he not turned to the sea, for salt water had coursed through his family’s veins for three generations.

He made his first sea voyage as a baby of two years and became captain of a vessel at 17. He would be at sea, save for a few brief intervals, for 60 years, and would command more than 100 ships. He crossed the Atlantic more than 500 times.

In 1871 Bernier saw the Polaris in drydock being readied for a voyage north in which the American explorer, Charles Francis Hall, hoped to reach the North Pole.

This chance observance aroused his interest in the Arctic, and he later wrote that the experience “led me to read up the history of polar exploration in my spare time, and to study assiduously the problems of Arctic navigation. From 1872 my cabin library on shipboard consisted mainly of books on Arctic travel, and the latest Arctic maps were always in my chartroom.”

Not until 1896, however, during a period of temporary retirement from the sea, did Bernier have the leisure to turn his thoughts seriously northward. The previous year he had received a prestigious appointment as governor of the Quebec City jail, a position he would hold for three years.

This sinecure allowed him the free time to study the challenges and potential of the Arctic, and he set for himself an ambitious goal. He would discover the North Pole for Canada.

To be the first to reach the geographical point where all lines of longitude meet had been a goal of explorers and adventurers for almost as long as the Northwest Passage had occupied their attentions.

Already Robert Peary was active in prosecuting his attempts on the pole from a land base in north-western Greenland and would shortly begin to use bases in Ellesmere Island, nominally Canadian territory.

Bernier felt strongly that the glory of polar discovery should be Canada’s. “And why should Canada not reap the benefits of all the work accomplished so far?” he asked the Quebec Geographical Society in 1898. “Why should we allow other countries to overtake us?…. Why should Canadians not go as far north as ninety degrees and place their flag on that part of the globe, the northernmost boundary of Canada, a country that is part of the British Empire?”

These are words that should resonate to the embarrassment of all Canadians, especially now, over a hundred years later, as our nation continues to struggle with its northern vision.

Bernier was an able publicist. His country had yet to have anyone champion the cause of the Arctic and preach the necessity of exerting its sovereignty in a territory largely the domain of foreign whalers and explorers.

With flair and skill, he began to promote his dream of conquering the pole, preparing detailed plans for achieving his goal. But although he won the support of many influential politicians, he failed to get sufficient financial backing to mount a private expedition.

He turned, therefore, to the government, hoping to organize an official voyage on its behalf. The government’s reaction was unusual. While never firmly committing itself to support a Bernier-led polar expedition, it did nonetheless give him permission to select and purchase for the government a ship suitable for Arctic work. Bernier naturally assumed the ship would be used for his northern venture.

In 1904 he went to Germany and purchased the Gauss, a ship built there three years earlier for an expedition which wintered successfully in the Antarctic. Back in Canada and renamed the Arctic, the vessel was provisioned with supplies sufficient for three years for Bernier’s attempt on the Pole.

But in July, shortly before the Arctic was due to leave, the Prime Minister, Sir Wilfrid Laurier, announced a change in plans — the Arctic would go instead to Hudson Bay to deliver supplies to the Royal North-West Mounted Police post established the previous year at Fullerton. The government had learned that American whalers were fishing the northern waters of Canada’s vast inland sea and feared for the validity of its claimed sovereignty over the area.

Bernier was bitterly disappointed. For years he had planned and publicized his vision of Canada at the pole and, at the last possible moment, the opportunity had been snatched from him.

True, he was to act as captain of the ship, and it was a voyage to the Arctic, but this was little consolation; another man, Superintendent J. D. Moodie of the Royal North-West Mounted Police, had been given command of the expedition itself.

In the summer of 1904, Bernier took the Arctic to Hudson Bay where he delivered supplies to the Fullerton post, a one-storey wooden structure, twenty-five feet by fifteen.

The Arctic returned to Quebec the following October. The wintering had served only to bolster Bernier’s fascination with the Arctic. He vowed that he would return, but it was the High Arctic that he longed for.