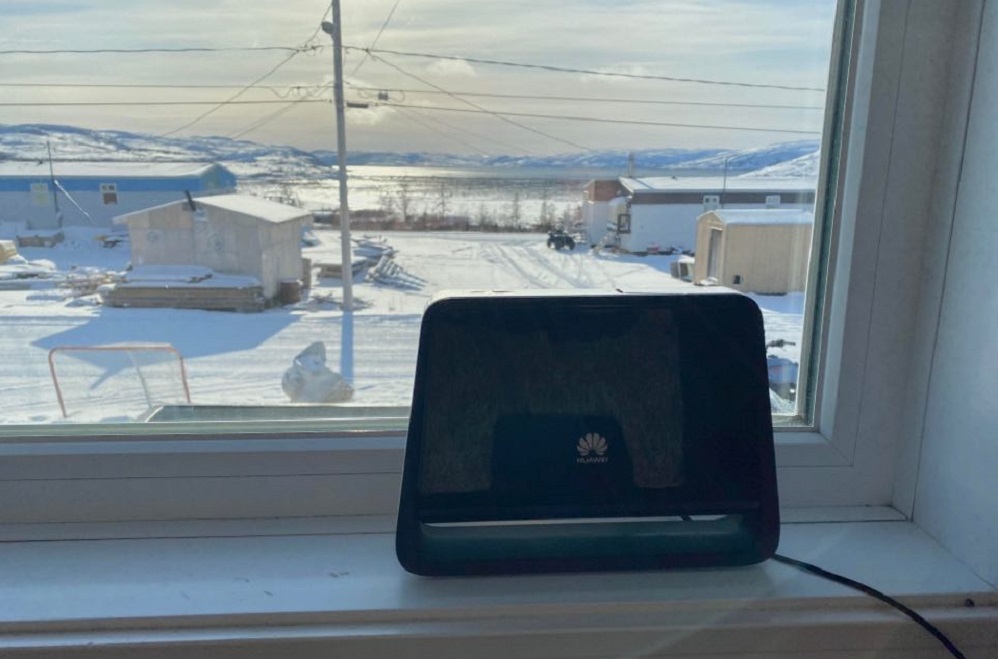 A modem sits on a windowsill overlooking Kangisualujjuaq, where customers have had slow to no bandwidth for the last couple of months. Tamaani says it will credit customers who lost service. (Photo by Felix St-Aubin)

Tamaani Internet says it’s in the process of crediting more than $40,000 dollars to customers in two Nunavik communities who have experienced major outages to their internet service.

A number of internet users across the region have experienced slow and next to no bandwidth in recent months.

In Kangiqsualujjuaq and Ivujivik, Tamaani has recently replaced the local LTE core, which serves as the base for establishing user connection to the internet. That appears to have caused outages for hours or days at a time in those communities.

“We are aware of the recent degradation of the local internet distribution in a handful of communities,” said Daryl Combden, who heads the Kativik Regional Government’s administration department, which oversees Tamaani.

“Credits are [being] issued following major outages in local distribution where service was completely down for consecutive days.”

Tamaani technicians have since visited both communities to exchange customers’ SIM cards for ones that are compatible with the new LTE network.

Tamaani is planning to do the SIM card exchanges in other Nunavik communities this fall. But Combden said technicians will keep monitoring the LTE core in Kangiqsualujjuaq to make sure it’s working before Tamaani decides to implement it in other communities.

A Tamaani residential internet customer in Kangiqsualujjuaq said the internet was down for full weekends through September and into October. Since they had their SIM card replaced mid-month, the customer said the service is much better—though still not entirely reliable.

“For the first few days (after the SIM card was replaced), you could really notice a difference,” said the customer, who didn’t want to share their name. “But a few days later, we were seeing the same problem.

“Some days, you can only access internet intermittently,” they said. “Today, it seems to be working OK—we haven’t had any big crashes.”

In Kangiqsualujjuaq, the Northern Village, the local school, the airport and the health centre all use a different Tamaani network reserved for commercial clients, which hasn’t had the same bandwidth problems.

Tamaani counts about 3,000 customers in Nunavik—a region of roughly 14,000 inhabitants. About 2,700 of those accounts are residential.

To deal with an increased demand for bandwidth across the region, the KRG has applied to the CRTC’s broadband fund, with the hope of securing $27 million to update satellite capacity in the region over five years.

Confirmation of that funding should come this fall.

Combden said the KRG is looking at all of its options, including discussions with major operators to determine whether the organization could purchase additional satellite capacity for the region.

“At present, the KRG is using almost 100 per cent of the capacity on its existing satellite,” he said.

“Additional capacity will likely come from another satellite requiring additional ground infrastructure both at the community and the southern gateway.”

The current cost of satellite capacity for Nunavik is “extremely expensive,” Combden said, stressing the need for government subsidies and support for improved bandwidth.

That’s particularly true this year, while so many Nunavimmiut are working from home on virtual platforms.

“Improving and increasing our broadband services has become more crucial in light of the COVID-19 circumstances and the increased needs for tele-meetings, tele-health, tele-education, etc.,” Combden said.

“If this capacity cannot be subsidized through the support of federal and provincial governments, there are not many options left.”