Taste of the Arctic offers a culinary tour of Inuit Nunangat 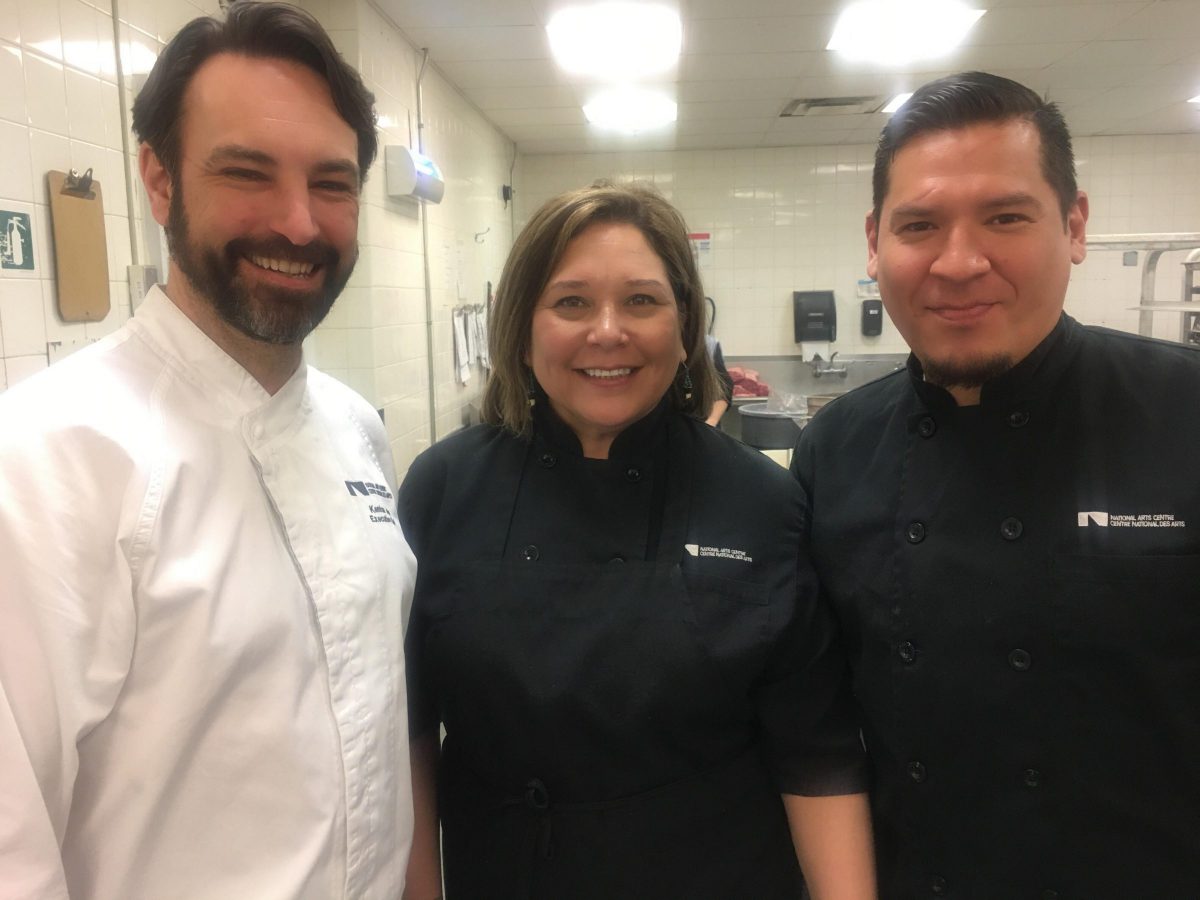 Iqaluit chef Sheila Flaherty, centre, stands with the National Arts Centre’s executive chef, Kenton Leier, and Chef Rich Francis, owner of The Seventh Fire Hospitality Group, who has won honours for his approach to native foods and Indigenous cuisine. “I was just cleaning some Arctic scallops when they came by,” Flaherty said. Flaherty and the NAC are collaborating on a show-stopping menu for Inuit Tapiriit Kanatami’s Taste of the Arctic on May 15. (Photo courtesy of Sheila Flaherty)

If you’re longing to take a trip across the Arctic, you don’t have to go much further than the National Arts Centre in Ottawa on May 15.

That’s when Inuit Tapiriit Kanatami will host its annual Taste of the Arctic event, which this year promises to offer tastes from the four regions of Inuit Nunangat, from the Inuvialuit region of the Northwest Territories to Nunavut, Nunavik and Nunatsiavut.

Dishes on the menu include hunger-inducing combinations such as muskox jalapeno smokies, sumac smoked caribou with aqpik (cloudberry), wild goose roasted in herbs on corn, and seal sliders. 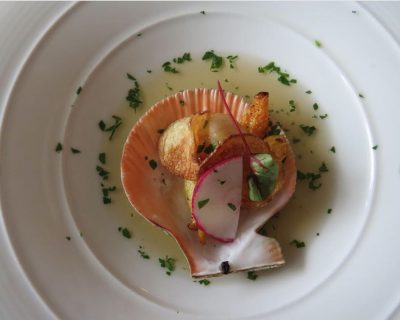 Good enough to eat: a scallop in the shell with garlic and ginger. (Photo courtesy of Sheila Flaherty)

And for those who still have room: crowberry cheesecake bites and wildberry cobbler.

The menu is a collaboration between Iqaluit chef Sheila Flaherty, a past contestant on Master Chef, and the NAC’s executive chef, Kenton Leier.

Since Flaherty shared some of her spring dishes with Nunatsiaq News last year, she’s been busy.

Among other things, she has worked towards setting up an Arctic char sushi business in Iqaluit, catering for various events and meeting with the visiting southern Canadian celebrity chef Chuck Hughes and a Japanese television crew.

“I have a nice little niche in the Arctic, and when I got approached by ITK, I didn’t know what to say,” Flaherty said. “I have never been in a position where I’m the equivalent to an executive chef: I am usually in the trenches.”

By that, Flaherty means she can usually be found making and assembling, say, 500 seal sliders for Nunavut Day, or treats for Prince Charles and Camilla, by herself or with the help of her husband and chief taste-tester, Johnny—but not in a kitchen like that at the NAC, with a staff of 30.

When Flaherty saw the list of inuksiutiit, the country foods that ITK would make available for the event, she said she felt “like a kid in a candy store.”

“I said to ITK that, as a chef I follow the seasons, when I cater—and it’s ptarmigan season,” Flaherty said.

So when she next came to Ottawa from Iqaluit, she packed some of Johnny’s freshly hunted birds in her suitcase to bring to the NAC.

“That’s what Inuit and northerners do: travel with food,” she said.

In the NAC kitchen, Flaherty then showed everyone how to butcher the birds and invited them to have a taste of it, raw.

“With my breaking the ptarmigan down, skinning and gutting it, I certainly gained the curiosity of the whole kitchen,” she said, noting that “some were even adventurous enough to try the lungs.”

Flaherty also took seal meat off bones for grinding into slider burgers, and some of those in the kitchen also tried the seal meat, which they decided tasted like tuna.

Before the May 15 event, Flaherty said she’ll be in the kitchen, processing the food needed for the menu.

All the menu items are based on recipes are she developed, used when catering or experimented with in her kitchen.

A sample of some of the amazing food & people I got to share my appreciation for life with today. I’m SO excited for “A Taste of the Arctic” happening on May 15th thanks to @ITK_CanadaInuit @gunuyung @CanadasNAC @mediastyle
Get your tix here https://t.co/3WfiW5cTsf #ATOTA ❤️ pic.twitter.com/D1dRCgb8oO

Ottawa journalists and food bloggers came to a pre-event tasting May 1, and that made Flaherty nervous, “because these people are not Inuit and they’re not northerners.”

The chowder inspired an Ottawa food blogger, @RoughChopOttawa, to comment, “I thought fois gras was fancy until I tried maktaaq!”

Flaherty said all the dishes on the menu, as elaborate as some sound or look, don’t take away from the “delicious natural flavour of what it has to offer our palates.”

The attention to Inuit food in the south is new, she said. And she said she’s happy to see the cuisine more on the radar of foodies and chefs.

Some of the country food-inspired dishes are likely to find a place on the menu at the NAC café.

Tickets for the May 15 event, which will also feature music by Northern Haze, are available at ITK’s website.