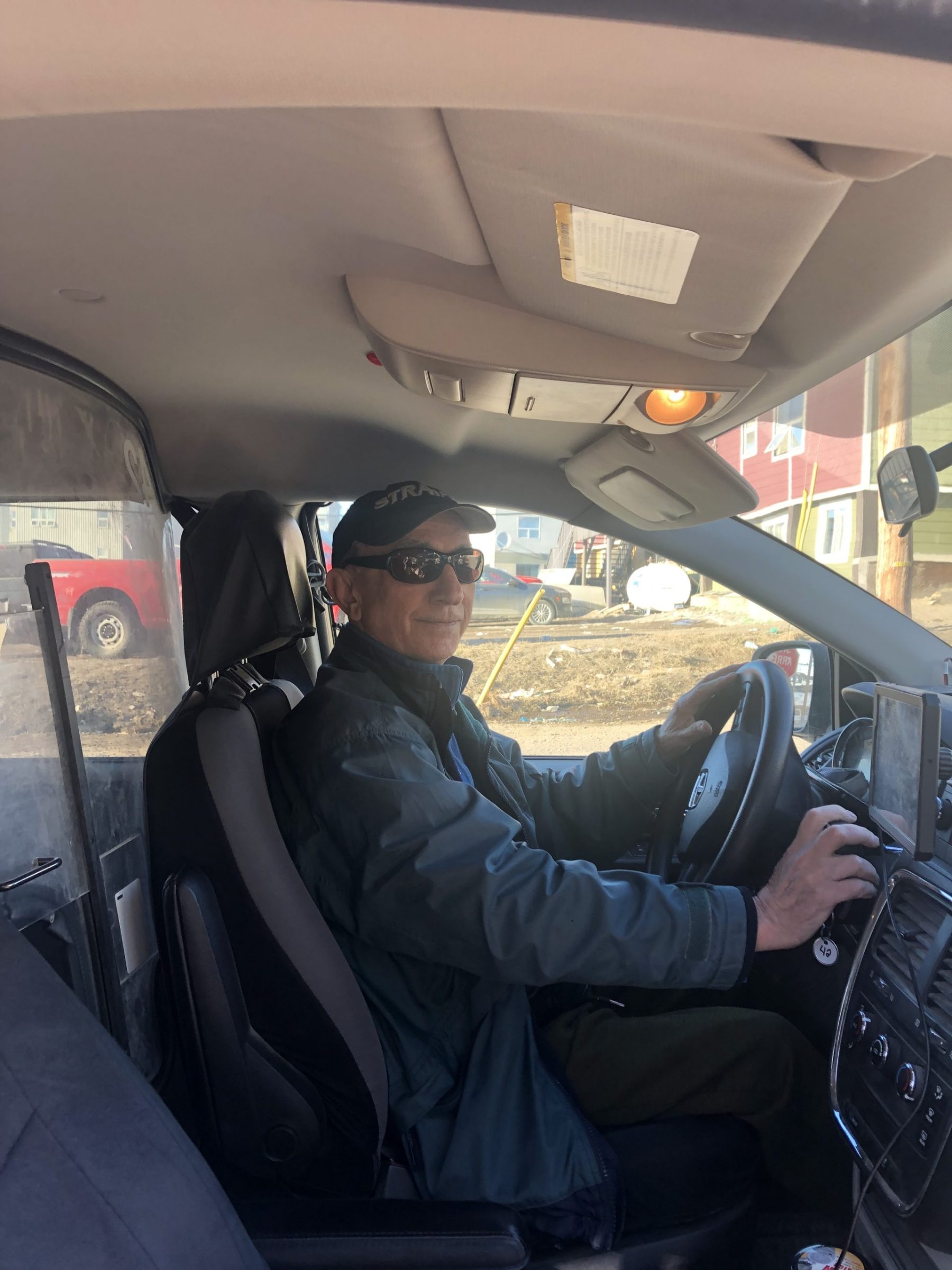 Amir Javaheri in his taxi. He said that rock throwing and unruly customers are consistent problems, but at 76, he still enjoys working as a taxi driver. (Photo by David Lochead)

Taxi driver loves Iqaluit. Rock throwers? Not so much

Amir Javaheri was driving his taxi at around 11 p.m. when he heard a loud sound from the passenger seat window.

“I look, I see the hole in the window, and then I see the kids running behind Northmart,” he said of the incident, which occurred in 2011.

Javaheri, 76, has been driving cabs in Iqaluit for the past 15 years, and said people have been throwing rocks at him and his colleagues the entire time he’s worked in the city.

In fact, Caribou Tuktu taxi drivers experience about three or four rock-throwing incidents per week between spring and fall, according to company administrator Ronnie McGregor.

Javaheri speculates it happens more often this time of year because schools are closed, and kids get bored.

Last week, Nunatsiaq News rode along with Javaheri in his cab. He talked about the violence he sometimes faces, why he stays in the business despite the challenges, and what he believes the city can do to make it safer for drivers.

The ride started on a warm June 3 night with a passenger en route to Apex. After that, a steadier stream of customers got rides to and from the Chartroom, one of the bars in Iqaluit.

“Everybody’s going to the Chartroom,” Javaheri said at one point during the evening, to the delight of one of the three passengers in the back.

Originally from Iran, Javaheri moved to Canada in 1986, where he now has a wife and two grown children. He lived in Montreal until 2003, then moved to Gatineau where he owned and operated a Super Saver franchise.

He abandoned that venture in 2007 when the recession hit, and moved to Iqaluit.

Javaheri said he initially planned to stop in Iqaluit for only a year, but found himself loving the community and so he stayed.

He said he enjoys going onto the land and tries to hike every Sunday.

Being a taxi driver, he has also built connections with many of the residents in Iqaluit. Some people don’t believe he is 76, he jokes.

“I don’t know all the names, but I know almost everyone, honestly,” Javaheri said.

Cab drivers in Iqaluit have become more vocal lately about the violence they experience out on the road. One Saturday night last September, a group of drivers protested by parking their taxis near Northmart for more than an hour.

In late May, the City of Iqaluit got involved after hearing renewed complaints from drivers. It issued a public service announcement encouraging the public to refrain from throwing rocks, saying it’s dangerous to people and destructive to property.

Currently, said Javaheri, most of the rock throwing occurs in the area between Northmart and DJ’s Specialty Convenience Store.

“Every year,” he said, this area is the hot spot for rock throwing.

People have broken windows in Javaheri’s cab twice. Since he owns his car, he had to pay for the damage, which came in at around $1,000 each time.

He said he called the RCMP and while officers talked to the children, the rock-throwing did not stop.

This year, RCMP have had 22 documented incidents involving cab drivers, said spokesperson Cpl. Tammy Keller. She added the RCMP do not have statistics on violence against cab drivers.

“It’s a pretty quick road until you’re hanging around Northmart or meeting up with people that are not particularly healthy for young adults to [be around],” he said.

On top of rock throwing, Javaheri said he has to deal with drunk and unruly customers often. At least once a shift, there will be someone who does not have the money to pay for a ride.

He said when drunk passengers try to get a ride with him without having the money to pay, he tells them he will call the police. If that doesn’t work, telling them he will drive them to the RCMP headquarters usually does.

But sometimes, drunk passengers do damage.

One time, Javaheri said, a passenger pushed his passenger side door so far forward that it caused a dent in his car. This was after the passenger was told to leave the vehicle because he didn’t have any money.

Javaheri said a possible solution is for the city to enact a bylaw to make it mandatory for passengers to pay up front. Taxi drivers already have this option, but when a driver knows the person who may not be able to pay for the ride, it can be awkward to ask for prepayment.

Despite the challenges, Javaheri said he largely remains happy with what he’s doing, as it keeps him busy.

“I love driving, I love interacting with people,” he said of why he is still working.