Teacher fundraising for vet to visit Igloolik before Nunavut Quest 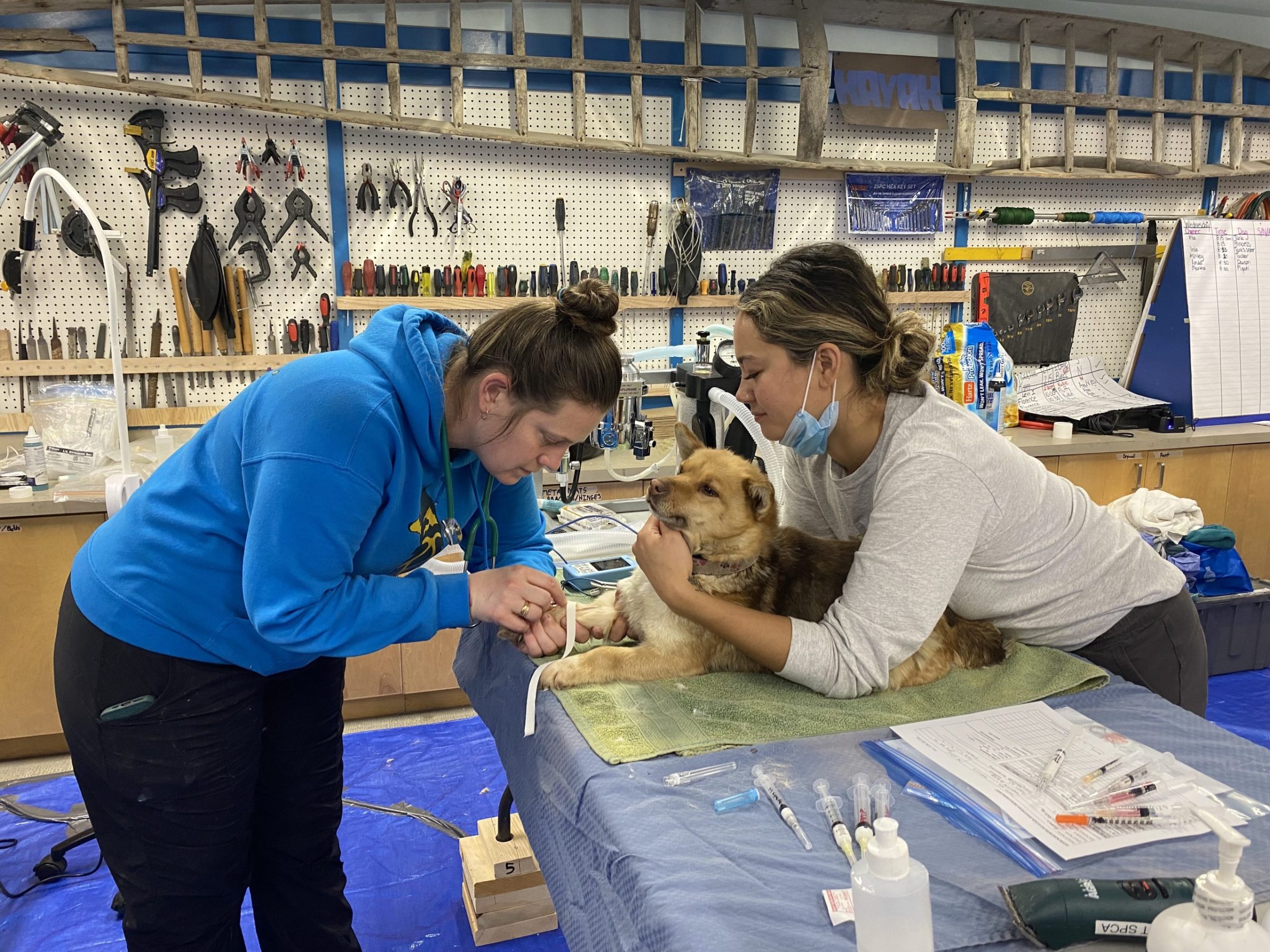 Queen, a Kimmirut dog, gets an intravenous catheter prior to being spayed by vet technologist Wendy Kane (left) and Dr. Michelle Tuma in Qaqqalik School’s shop. Tuma and Kane were part of Veterinarians Without Borders, an organization that partnered with the hamlet to offer free services in Kimmirut in March 2022. (Photo courtesy of Marieke Van Der Velden)

An Igloolik teacher is raising money for Veterinarians Without Borders to visit the community for the first time in five years.

Bailey Waldner, who has lived in Igloolik for four years and has two dogs of her own, hopes to raise $15,000 to bring the volunteer-run animal care provider to the community.

And she hopes to have it done before the start of Nunavut Quest this spring.

“All the dogs that are going to be coming here from other communities — it’s a good thing to have our dogs’ vaccinations updated, and whatever else.”

The $15,000 Waldner is seeking to raise will go toward bringing the organization into the community in early March. Of that, $7,500 will be to cover the cost of travel with the remaining $7,500 used for housing and supply needs for veterinarians while they’re in the community.

She said bringing a vet to Igloolik will also help residents who need to update vaccinations for their pets.

Waldner was able to administer vaccines for her own dogs but they aren’t considered valid, especially when she travels down south, because they haven’t been given by a licensed veterinarian.

“When Veterinarians Without Borders comes up, [my dog will] be able to have all of those shots again and they’ll have a record of it — they’ll have a paper trail.”

The team of veterinarians who visit the communities each year provides services such as vaccinations, spaying and neutering,

As a predominantly volunteer-run organization, Van Der Velden said its trips north usually involve the community raising funds for the cost of travel and accommodation, while the organization covers the cost of vaccinations and other services offered on the ground.

She said a highlight of bringing Veterinarians Without Borders to Nunavut is the many ways in which each community raises funds for such a service.

“What’s really amazing [is that] some communities do bingos or work with local businesses to get donations,” Van Der Velden said.

“There’s a real entrepreneurial spirit to community members that helps to make this happen.”

At the same time, the need to fly veterinarians into communities shows the consistent problem of — and significant need for — better animal care services within Nunavut.