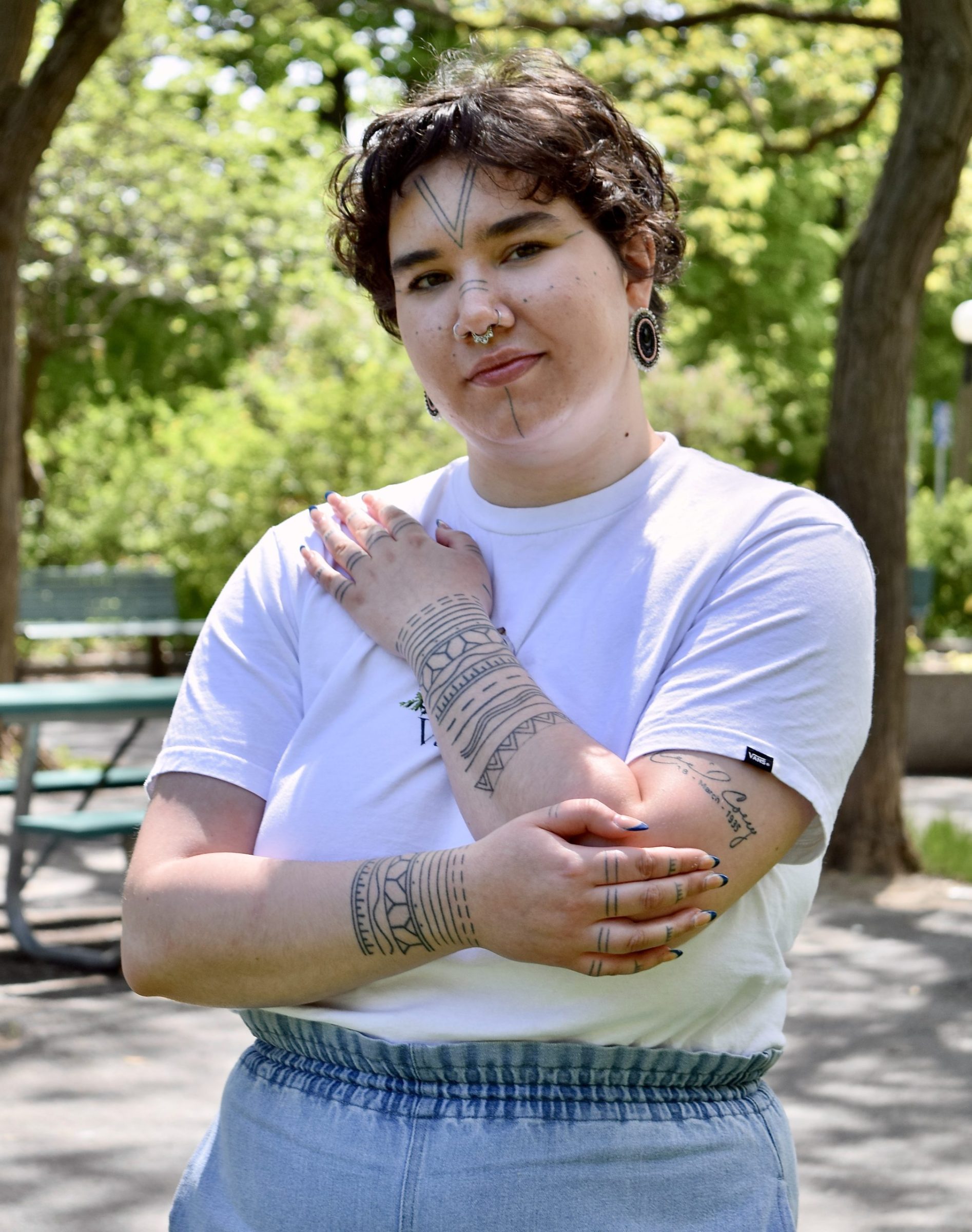 Tattoo artist and illustrator Aedan Corey, 23, is one of a growing number of young Inuit who are finding cultural connection and self-expression through traditional Inuit tattooing. (Photo by Madalyn Howitt)

The art of the Inuit tattoo

Growing up in Cambridge Bay, Inuk artist Aedan Corey wanted to be a writer and illustrator as early as age 11.

“When you come from a small town, I think it becomes almost second nature to want to pursue something that helps you express yourself,” Corey said.

But these days, the 23-year-old is not only putting pen to paper, but has taken to needle and ink.

Corey, whose pronouns are they/them, is one of a growing number of young Inuit learning about traditional Inuit tattooing.

The practice was banned for decades due to colonization, but is being rekindled through programs like the Inuit Tattoo Revitalization Project, which travels to Inuit communities to teach the art and history of tattooing.

When the project visited Cambridge Bay, Corey received their first tattoo and was immediately hooked.

“From then on, it was very much like this awakening. I think a lot of kids in our community have feelings of shame there and not necessarily realizing how important the relationship to our culture is,” Corey said.

Inuit tattoos were traditionally done through either a skin-stitching method, where a needle is used to thread ink under the skin; or a hand-poked technique, where a needle dipped in ink is poked at an angle into the skin, depositing the ink to create lines and patterns.

When Corey moved to Ottawa four years ago, they got their first facial tattoo on their chin from tattooist Zorga Qaunaq.

“When I got my first facial tattoo, it was very much like a very public and very open statement that I am enough. This is who I am. I am proud to be this person,” they said.

So when COVID-19 hit in March 2020, Corey took advantage of lockdown to practise tattooing on themselves with the proper supplies.

So far Corey has tattooed their own fingers, wrists, arms, forehead, cheeks and temples, and they’ve tattooed about 20 other people in Ottawa and Cambridge Bay.

The effects of intergenerational trauma and colonization on Indigenous communities makes it very important for Indigenous people to be able to express themselves in different ways, Corey said.

They see reclaiming Inuit tattooing as one way to help communities heal and reconnect with their traditions, while still letting individuals express themselves. 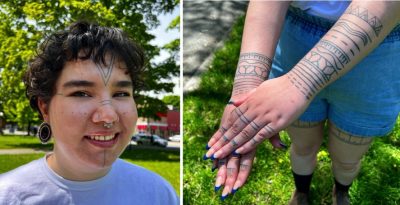 Artist and tattooist Aedan Corey, from Cambridge Bay, shows off their traditional Inuit tattoos, many of which they did themselves. Their tattoos represent family and personal milestones, like their forehead tattoo which they got after coming out as non-binary and two-spirit. (Photos by Madalyn Howitt)

“In today’s revitalization process, a lot of our [tattoo] meanings are kind of brought forth from ourselves, because a lot of the knowledge surrounding that can be inaccessible to some, especially if you don’t speak Inuktitut and if you are away from your communities. It can be difficult to find traditional meaning from symbols,” Corey said.

“So that’s something that I tried to share with other Inuit when I’m tattooing them … it’s OK to find your own meaning within whatever symbols you choose.”

Corey said their own tattoos represent their family and personal accomplishments, like graduating high school and coming out as non-binary and two-spirit.

“A big tattoo that I did on myself was my forehead tattoo. That was really symbolic for me,” Corey said.

“I had just kind of gotten out of a bad relationship and was feeling very much in this transitory phase … kind of considering this gender journey that I was going on.

“I think this tattoo was really instrumental in being able to further accept myself.”

Corey said it’s ideal if Inuit are tattooed by other Inuit who share a common understanding of the cultural significance. But, they added, it’s OK for Inuit to get traditional tattoos from non-Inuit tattoo artists if accessibility is an issue.

“I don’t want it to stop anyone from getting their tattoos. If that’s all you have [available], that’s totally fine as long as you make sure that it’s being done by someone who is respectful of the fact that these are Inuit tattoos specifically,” they said, noting they believe Inuit tattoos on non-Inuit people is a form of cultural appropriation.

In addition to becoming a tattoo artist, Corey is also one of the newest members of the Nordic Lab, a workspace and creative hub for artists from circumpolar nations housed at Ottawa’s SAW Gallery.

With support from the Inuit Futures program, which helps Inuit students undertake research in the arts, Corey is working under the mentorship of Nordic Lab director Taqralik Partridge.

Some of their upcoming projects include writing a book of poetry, an exhibition at the Pique art festival June 11 in Ottawa and learning traditional screen printing and block printing at the Nordic Lab.

“There’s a lot of people who either want to learn or are learning at the moment … honestly, it’s a little bit difficult to count,” Corey said.