The cold and hot spots of COVID-19 in North America

Nunavut has no cases, while Navajo Nation ranks highest in the United States 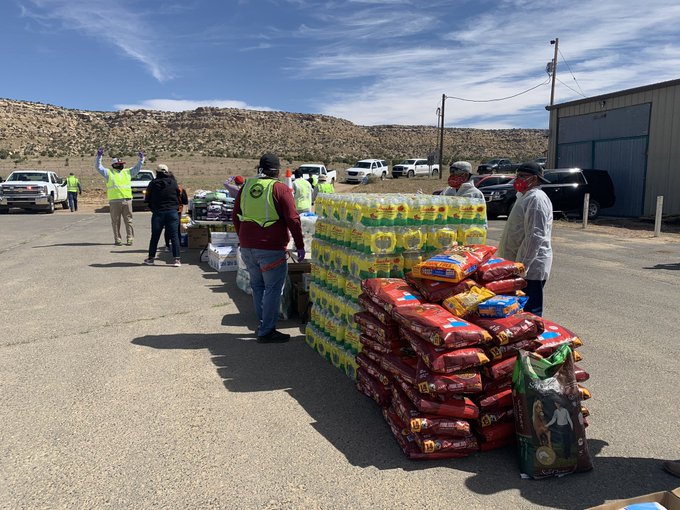 Navajo Nation leaders distribute food, bottled water, cleaning products and other supplies in their effort to stem the spread of COVID-19. (Photo courtesy of the Navajo Nation)

Two places in North America, Nunavut and the Navajo Nation, both with mainly Indigenous populations, have experienced the current COVID-19 pandemic in very different ways.

Both jurisdictions suffer from high levels of poverty, food insecurity, bad infrastructure and a history of relocation and cultural loss.

But Nunavut remains a COVID-19 cold spot, as the only jurisdiction in Canada that’s yet to have a case of the new coronavirus, while the Navajo Nation in the southwestern United States has become the U.S. hot spot, with the highest per capita rate of COVID-19 infection in the country.

So far, nearly 160 people have died from the new coronavirus in the Navajo Nation, which has a population of about 175,000.

Diné, as the Navajo call themselves, live in a huge reservation spanning parts of three southwestern states.

But unlike Nunavut, the Navajo Nation can be accessed by road, and that access may have been the game changer in the spread of COVID-19 among the Navajo.

Nunavut airlines started to ramp up their pandemic prevention plans in early March.

But that’s when U.S. health officials believe the biggest Navajo Nation outbreak started, at a Church of the Nazarene annual gathering on March 7, in the northeastern corner of Arizona, after which individuals drove back home, many already infected with COVID-19.

Over the past two months, there have more than 4,600 confirmed COVID-19 cases in the Navajo Nation, and every day has brought new deaths.

Travel in and around the region has been hard to control, with many residents travelling hundreds of kilometres just to buy water in bulk.

Since March 11, there’s been a state of emergency in place in the Navajo Nation, and on May 21 the Navajo Nation issued another stay-at-home order, requiring all residents to stay home and isolated.

And while some in Nunavut have chafed over the idea of curfews as a way to curb the spread of COVID-19, the Navajo Nation has mandated 57-hour, weekend-long curfews.

These limit travel to essential trips, such as grocery trips, livestock care, picking up supplies and medical visits, from Friday at 8 p.m. until Monday at 5 a.m.

As in Nunavut, wearing masks, washing hands and staying at home are the public messages that have been communicated about COVID-19 prevention.

But these are often delivered in person by Navajo Nation leaders and police.

They drive across the huge reservation of nearly 700,000 square kilometres to reach residents and personally deliver food, bottled water and cleaning products: one in three Navajo households have no running water, one in 10 have no electricity and internet access remains spotty.

“I’m confident that we will soon begin to see a decline in new cases if we continue to be diligent in wearing masks in public, practicing social distancing and isolating those who test positive,” Navajo Nation President Jonathan Nez said in a May 24 release.

The Navajo Nation recently received notice that it would receive $600 million to fight COVID-19, more than a month after President Donald Trump approved a relief package on March 30.

Nez said he wants to use part of that money for better water infrastructure—also a concern of Nunavut Tunngavik Inc., which earmarked $1.25 million of federal money to improve Nunavut water and sewer services to enable frequent hand washing by all Nunavut Inuit.

But in the Navajo Nation, the situation remains dire: Doctors Without Borders have come in to assist—the first time the humanitarian medical organization has deployed in the United States.

Medical help has also been sent in from the University of California, San Francisco.

“Extensive public health efforts by Navajo Nation leaders have been complicated by a long history of poverty and neglect, including chronic understaffing and underfunding of the Native American health care system,” Dr. Sriram Shamasunder, associate professor of medicine at the university, said in a recent news release.

“As our teams provide support for the locally led health response during the surge, we must continue to ask why the pandemic is spreading so fast across the Navajo Nation and how these structural injustices can be addressed and repaired in the future.”