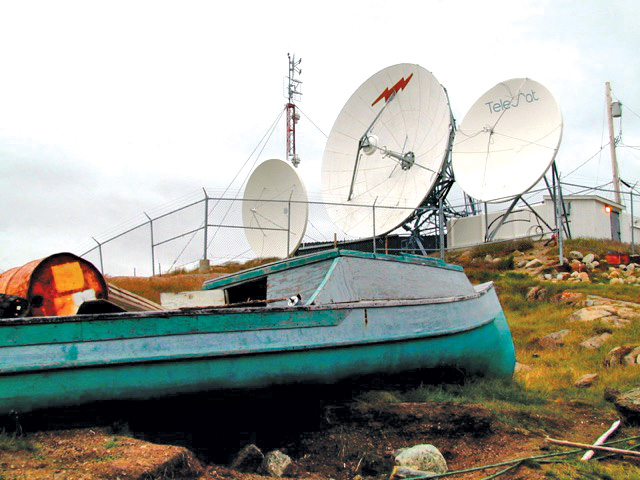 If you’re like most internet users in Nunavut, you’re probably used to slow, expensive downloads and on-again, off-again cellphone service.

You might think Nunavut was planned that way. But it wasn’t.

Those who helped create the Government of Nunavut dreamed of it being accompanied by a state-of-the-art electronic communications network.

“The face of the Arctic is rapidly changing, and in no area more so than in the field of electronic communications,” the Nunavut Implementation Commission declared in 1995, in its famous Footprints in New Snow report.

“A significant level of computer/electronic literacy has already been attained. With proper forethought, planning, and tools, this level of electronic literacy can be expanded and deepened and corresponding economic and other benefits realized,” the commission said.

At that time, the internet was a new, unfamiliar medium. A form of local dial-up internet access was available in Iqaluit through a company called Nunanet, but people in most other Nunavut communities had no affordable access.

Because of this, but primarily because of the extremely high cost of satellite communications and the total absence of any land-based fibre optic lines, they also knew that creating such a network would be a tough job.

“Making intelligent choices from among new communications technologies, and connecting those choices with a skillfully prepared work force, will be a major challenge of the new Nunavut Government.”

Telecommunications for a decentralized government

Chaired by Inuit leader John Amagoalik, the 10-member commission was handed the task of making recommendations on how a public government in Nunavut should be designed.

They concluded that Nunavut’s government would need a reliable, efficient communications network to function properly.

That’s because of the policy of decentralization, which sent roughly 400 mostly new government jobs to 11 of Nunavut’s smaller communities between 1999 and 2001.

The commission put hundreds of hours of work into studying the problem and published the results in widely distributed, but long-forgotten, supplementary reports.

In one of them, Nunavut’s planning body put forward a utopian vision: a network of “teleservice centres” that would link the territory’s 25 communities.

At those centres, all residents would get free or low-cost access to electronic communications equipment of all kinds—fax machines, scanners, computers and videoconference equipment.

They envisioned that this system would be piggybacked upon a robust network that would connect schools, health centres, hamlet facilities and decentralized territorial offices.

To show off its potential, in 1997 the commission also organized a big conference on the “nature of work” that drew delegates to Iqaluit from across the three regions that would soon make up Nunavut.

At the same time, they connected as many people as they could to the conference by combining every medium available to them at the time: satellite television, videoconferencing through telephone lines and satellite, fax machines, dial-up internet, and plain old voice telephone lines.

That included the use of English–Inuktitut interpreters, as well as sign language interpreters and an open captioning system for the hearing impaired.

“The conference organizers were aware of the risks of attempting such a technically complex format, but were firmly committed to the goal of demonstrating the potential benefits of telecommunications by pushing the limits of the current infrastructure,” organizers boasted at the time.

“Several people commented on how quickly technology had been adopted in Nunavut since the days when people did not have access to even the most basic equipment like telephones and fax machines.”

As we all know now, Nunavut never got there.

Instead of facilitating a decentralized government, the weak telecommunications networks that were put in place tended to hamper government operations.

In 1999, the sole territory-wide internet service available to Nunavut offered access only to governments and some private businesses, which included a few locally based internet providers.

Using funds from Industry Canada and other sources, the broadband corporation signed a contract with the Yellowknife-based SSi Micro to offer broadband internet in every Nunavut community.

That’s how the Qiniq network, which uses wireless signals in every community, came into existence in May 2005.

Finally, every community in Nunavut had gained access to a form of affordable internet.

But on Oct. 6, 2011, Nunavut residents received an abrupt wake-up call that exposed the territory’s total dependence on satellite communications.

Airlines cancelled dozens of flights, stranding thousands of passengers, and RCMP officers and territorial government officials in Iqaluit fell back on Iridium satellite telephones to reach the small communities.

After that incident, governments and many other stakeholders and agencies, including the CRTC, began to take a long, hard look at the fragile state of northern Canada’s telecommunications system.

Spurred by an earlier telecommunications breakdown in the summer of 2009 that hampered the Operation Nanook military exercise, a body called the Northern Communications and Information Systems Working Group did a big assessment of the communications infrastructure in the Canadian Arctic.

That company was eventually acquired by Quintillion Subsea Holdings of Alaska, which did install undersea fibre optic around Arctic Alaska. But a plan to connect the Canadian Arctic has yet to be implemented.

At the same time, northern organizations and governments, especially the Government of Nunavut, began to make more aggressive submissions to the CRTC, demanding that the regulator do more to enforce the creation of more reliable telecommunications in Nunavut.

“Remote isolation cannot be used as a justification for governments, businesses nor individuals being unable to access a service that is vital in today’s digital economy and that in turn provides access to other services, such as health care, education, government, public safety and banking,” the GN told the CRTC in 2016.

As for the state-of-the-art telecommunications system that planners had envisioned for Nunavut, Nunavut still waits.

Jim Bell lived in Nunavut from 1979 until 2015, and for much of that time worked as a reporter and editor at Nunatsiaq News.