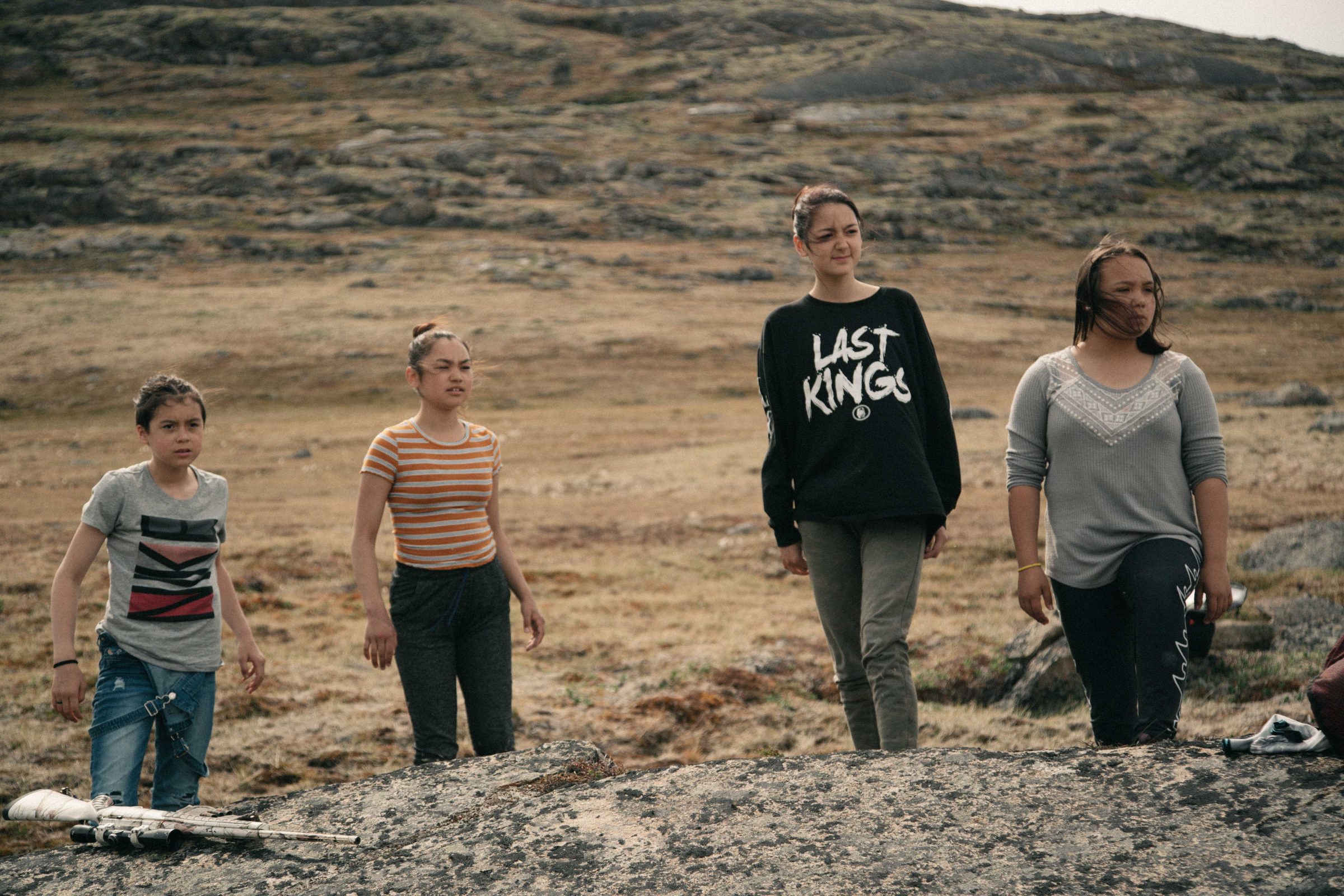 Attention residents of Pangnirtung: an alien invasion is upon you.

But don’t worry too much—you have a group of young female heroes and Nunavut’s fastest runner on your side.

A feature film about a group of local girls who fight an alien invasion began shooting in Pangnirtung last week. It includes a showdown between the aliens and Natar Ungalaaq, best known as the fast runner in Atanarjuat.

The movie, called Slash Back, is the brain-child of Nyla Innuksuk, born in Igloolik.

“The learning curve has been totally crazy, but I feel like for me and the girls, we’re all kinda figuring this out together,” Innuksuk said from Pangnirtung after the first week of shooting.

“We were asking a lot of these girls, and they were really incredible and maintained their energy until the very end of the week. I think it helped that we monitored their sugar intake,” she laughed.

Innuksuk described the film as horror/sci-fi/adventure. “It’s about a group of friends, and this crazy day in their lives as they take on an alien invasion in their hometown,” she said.

Innuksuk has made a number of other films and more recently co-created the first-ever Inuk superhero for Marvel Comics. But shooting an alien flick in Pangnirtung brings with it a host of firsts, she said.

“We got to film a death scene, right in the community on the docks. Thankfully we shot it the day before there was a beluga that came into the bay.… We’d been in trouble if we were shooting that day, because the docks were jam-packed with hunters,” she said.

“Our stunt performers and our alien suits are coming up this week, so it’ll be interesting to see the reaction around town.”

Making a movie about aliens gave Innuksuk and the cast of young women a chance to wonder what would happen if aliens ever came to Earth, and why aliens might come to Nunavut first.

“Maybe aliens would come here for the 24-hour sunlight, for energy or refuelling. Or maybe because it’s closer to the poles, for some magnetic reason,” Innuksuk said.

Nalajoss Ellsworth, 11, plays the character of Uki in Slash Back—the quirky member of the group of friends. She said aliens might land in Nunavut because it’s closer to their home planet.

“I feel they’re the real humans, maybe we’re the aliens. I don’t know—no one knows anything,” she said.

Tasiana Shirley, 13, plays another one of the friends, Micah. If aliens did come to Earth, Nunavut would be a great place for them to hide, she said.

Alexis Vincent-Wolfe, 14, plays the third member of the group of friends, Jesse. Since humans haven’t explored much of space, she said there probably are aliens hiding out there somewhere.

“I think they’d be a little scared of us at first and then friendly. Unless they totally devoured us,” she said.

Chelsea Prusky, 14, plays the fourth member of the group, a character named Lena. Her character is shy and scared of the aliens and is always on her phone. Prusky said she has a lot in common with her character.

“Oh my God, I’m always on my phone too, and I would never go out to fight aliens. Lena’s friends try to encourage her to go fight aliens … but she ends up just staying in the crate watching the kids. I would definitely stay in the crate and just watch the kids too,” she said.

Nunavut might be a good place for aliens to land first, she said.

“Maybe it’ll be way more easy to attack us, because in Nunavut, who would think aliens would come here?”

The film will shoot over 26 days in total, Innuksuk said. The plan is to have the film premiere at a festival in 2020.

In the meantime, the community of Pangnirtung has been supportive and welcoming of the cast and crew—a crucial element to the project, Innuksuk said.