The deep footprints of tired men 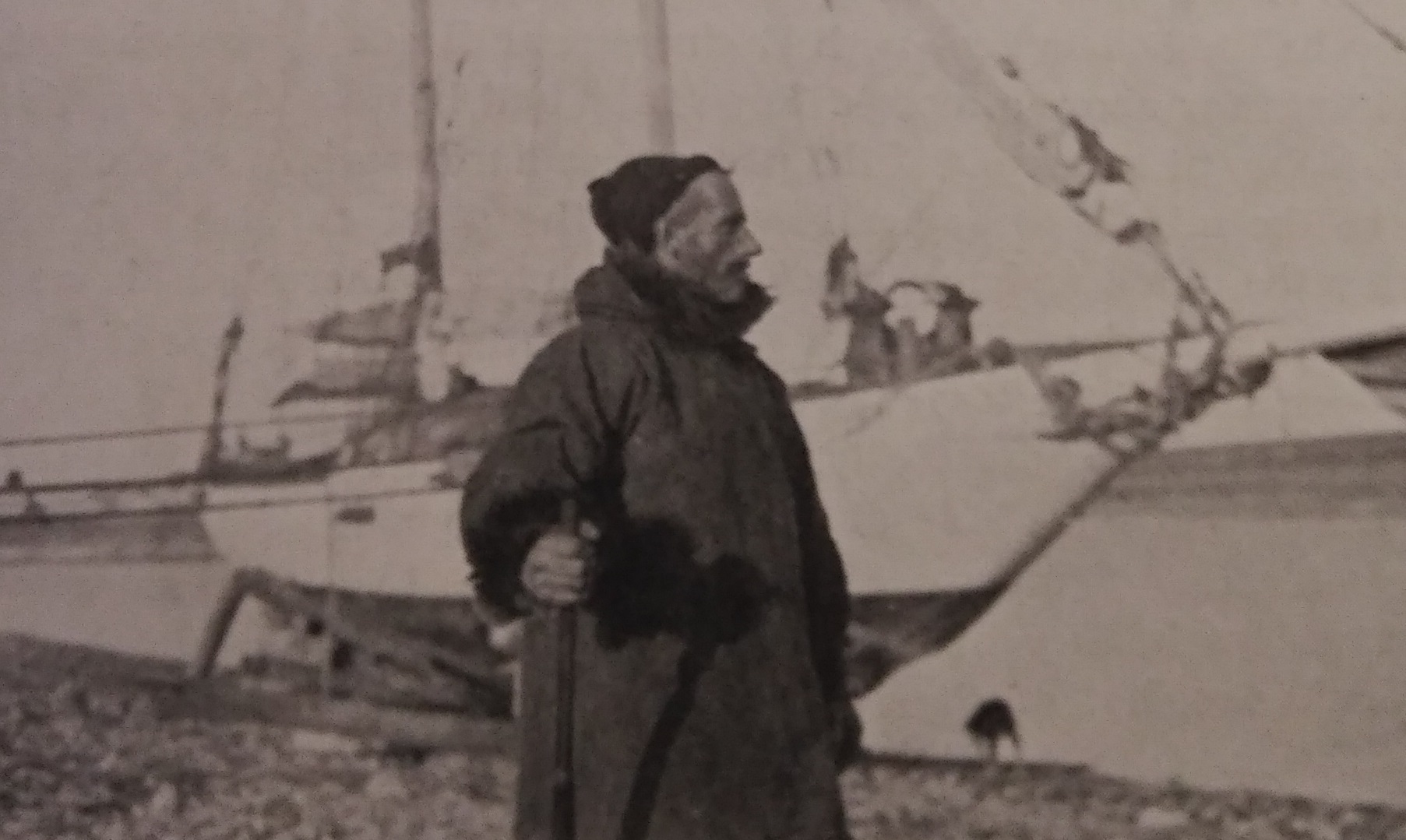 Peter Norberg, a Swedish trader shown here, travelled with Knud Rasmussen to Qavdlunaarsiorfil where they found remains of the Franklin Expedition. (Photo from Report of the Fifth Thule Expedition, Vol. 1, No. 1, page 91)

In October 1923, before the ice formed and he began his journey westward, Danish explorer Knud Rasmussen travelled with Peter Norberg, who had arrived to establish a trading post on King William Island, and an Inuk named Qaqortingneq.

They went to Qavdlunaarsiorfik, on the east coast of Adelaide Peninsula.

There they found exactly what Qaqortingneq had told them to expect: the sun-bleached bones of members of the long-lost Franklin Expedition, as well as some pieces of cloth and leather.

Rasmussen claimed he was the first outsider to visit the spot.

He gathered the bones, built a cairn over them and raised the British and Danish flags at half mast, giving the lost explorers their final honours.

Respectfully, he wrote, “The deep footprints of tired men had once ended in the soft snow here by the low, sandy spit, far from home, from countrymen.”

The Nattilingmiut were certainly the most isolated Inuit that Rasmussen encountered. They had had very limited interactions with white explorers, starting with a visit by the British explorer John Ross, who eventually abandoned his ship, the Victory, on their shores in 1832.

The wreck had long provided timber and iron for hunters resourceful enough to salvage it. And the experience of the Franklin Expedition, which cost the lives of more than 100 men, was still fresh in the memories of some.

Rasmussen collected two accounts of the meetings that had happened seven decades earlier between Nattilingmiut and the men of the Franklin Expedition, some struggling to survive, others already dead.

From Iggiaraarjuk, he heard this brief story:

“My father Mangaq was with Tetgatsaq and Qablut on a seal hunt on the west side of King William’s Land when they heard shouts, and discovered three white men who stood on shore waving to them.

“This was in spring; there was already open water along the land, and it was not possible to get in to them before low tide. The white men were very thin, hollow-cheeked, and looked ill.

“They were dressed in white man’s clothes, had no dogs and were travelling with sledges which they drew themselves. They bought seal meat and blubber, and paid with a knife.

“There was great joy on both sides at this bargain, and the white men cooked the meat at once with the aid of the blubber, and ate it.

“Later on the strangers went along to my father’s tent camp and stayed there the night before returning to their own little tent, which was not of animal skins but of something that was white like snow.

“At that time there were already caribou on King William’s Land, but the strangers only seemed to hunt wildfowl; in particular there were many eider ducks and ptarmigan then. The earth was not yet alive and the swans had not come to the country.

“Father and his people would willingly have helped the white men, but could not understand them. They tried to explain themselves by signs, and in fact learned to know a lot by this means.

“They had once been many, they said; now they were only few, and they had left their ship out in the pack-ice. They pointed to the south, and it was understood that they wanted to go home overland. They were not met again, and no one knows where they went to.”

And from Qaqortingneq, this collected this story:

“Two brothers were once out sealing northwest of Qeqertaq (King William’s Island). It was in spring, at the time when the snow melts away round the breathing holes of the seals. Far out on the ice they saw something black, a large black mass that could be no animal. They looked more closely and found that it was a great ship.

“They ran home at once and told their fellow-villagers of it, and the next day they all went out to it. They saw nobody, the ship was deserted, and so they made up their minds to plunder it of everything they could get hold of. But none of them had ever met white men, and they had no idea what all the things they saw could be used for.

“One man, who saw a boat hanging up over the gunwale, shouted: ‘A trough. A gigantic trough! I am going to have that!’ He had never seen a boat and so he thought it was a meat trough. He cut through the lines that held the boat, and it crashed down on to the ice bottom upward and was smashed.

“They found guns in the ship too, and as they had no suspicion of what they were, they knocked the steel barrels off and hammered them out for harpoons. In fact, so ignorant were they about guns that they said a quantity of percussion caps they found were ‘little thimbles,’ and they really thought that among the white men there lived a dwarf people who could use them.

“At first they dared not go down into the ship itself, but soon they became bolder and even ventured into the houses that were under the deck. There they found many dead men lying in their beds.

“At last they also risked going down into the enormous room in the middle of the ship. It was dark there. But soon they found tools and would make a hole in order to let light in.

“And the foolish people, not understanding white man’s things, hewed a hole just on the water-line so that the water poured in and the ship sank. And it went to the bottom with all the valuable things, of which they barely rescued any.

“The same year, well into spring, three men were on their way from King William’s Land to Adelaide Peninsula to hunt for caribou calves. There they found a boat with the bodies of six men. In the boat were guns, knives, and some provisions, showing that they had perished of sickness.

“That is all I know about the ‘pelrartut,’ as we call the white men who once visited our country and who were lost without our forefathers being able to help them.”