The myth of the ‘Blond Eskimos’ 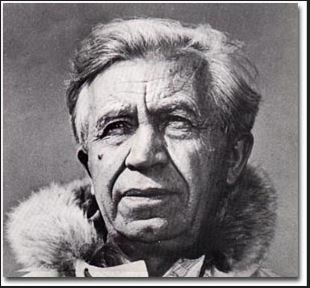 Vilhjalmur Stefansson, who popularized a theory that there were “Blond Eskimos” in the central Canadian Arctic descended from the lost Icelandic colonists in Greenland. (Photo courtesy of Harvard Square Library)

As Danish explorer Knud Rasmussen travelled farther west through Inuinnait territory and into the Mackenzie Delta, he came upon more and more small trading stations built to trade for furs with the local Inuit.

Some of these were the property of the giant Hudson’s Bay Company, but others belonged to independent traders trying to eke out a living in a harsh land.

One of the traders who had built such posts was a Dane, Christian Klengenberg.

Klengenberg was 24 years old when he jumped ship in Point Barrow, Alaska in 1893 and began his life among the Inuit. Soon, he married an Inupiaq woman, whose name he recorded as Gremnia. He supported himself through whaling and trading.

The following year, he took a boatload of supplies to the whaling fleet at Herschel Island, a wild and lawless outpost of American whaling just east of the Alaskan border in Canadian waters.

From there, he travelled northeast to an island that the whalers assumed to be uninhabited. But while there, he claimed to have seen human footprints.

Time did not permit him to investigate, but he determined that someday he would return and find these unknown people. However, the pressures of supporting a growing family kept Klengenberg at home in Alaska for the next decade.

In 1905, Capt. James McKenna, impressed by the young Dane’s knowledge of sea ice, hired him to accompany him and his two ships, the Charles Hanson and the Olga, to travel once again to Herschel Island.

There, McKenna put Klengenberg in charge of the Olga and the two ships headed east into largely uncharted waters. Klengenberg had been ordered to keep in sight of the other ship, but the two separated in heavy fog. The Charles Hanson returned to Herschel Island, where it wintered, its captain presuming the Olga was lost and that her crew had perished.

The following summer, though, the Olga returned with Klengenberg and his family and five of its nine crewmen.

Klengenberg reported that ice had prevented him from returning the previous year and that he had wintered on what he thought was Banks Island. In fact, it turned out to be Bell Island, off Victoria Island’s southwestern shore.

That summer a young Icelandic-Canadian adventurer, Vilhjalmur Stefansson, then new to the Arctic, reached Herschel Island. There, he met Klengenberg, who had just returned from his wintering on the Olga.

Klengenberg told Stefansson about the Inuit he had met to the east and showed him a collection of artifacts he had acquired from them, including a number of knives made of copper. For that reason, the people, who were Inuinnait, came to be known as the Copper Eskimos or Copper Inuit.

However, it was Klengenberg’s description of the people themselves that intrigued Stefansson.

Klengenberg told Stefansson — or so Stefansson later claimed — that these Inuit had never seen a white man before, and yet some looked very much like white men themselves, having blue eyes and fair hair.

Stefansson spent 16 months in the Arctic on that expedition before returning south. Immediately, he began planning another expedition, one that he hoped he would lead.

He secured the backing of the wealthy American Museum of Natural History in New York as well as the Canadian government, which appointed Rudolph M. Anderson as the expedition’s co-leader.

In April 1908 the expedition headed north, where the explorers and scientists would spend four years.

Two years into the trip, Stefansson and his Inuit guides finally reached a camp on Victoria Island where he encountered the people who had been on his mind since his meeting with Klengenberg, the Copper Inuit.

He wrote in My Life with the Eskimo, “That morning … I knew I was standing face to face with an important scientific discovery. … When I saw before me these men who looked like Europeans in spite of their garb of furs, I knew that I had come upon either the last chapter and solution of one of the historical tragedies of the past, or else that I had added a new mystery for the future to solve: the mystery of why these men are like Europeans if they be not of European descent.”

Stefansson spent a year among the Inuinnait, then returned to Herschel Island and Alaska.

In 1912, he returned south, first to Seattle and then to New York. His claim to have discovered Inuit who resembled Europeans — whom he called the “Blond Eskimos” — was picked up by the press and spread around the world.

Lost tribe stories were always great fodder for newspapers. Stefansson, as an Icelander, was familiar with the saga accounts of the Icelanders who had colonized Greenland under Eric the Red close to a thousand years earlier, and whose descendants had disappeared a few centuries later.

Craving fame, he would have loved to be the man who unravelled the mystery of their fate. What a romantic notion, that they could have crossed into Canada and moved west, intermarried with the Inuit and survived as a mixed race in the last part of the Canadian Arctic to be explored!

What a twist of fate that an Icelander should be the man to “discover” them and bring them — and himself — to the attention of an incredulous world!

But the reports also made Stefanssson suspect in the eyes of some of his scientific peers.

Had the man lost his objectivity? Had he simply convinced himself that he had found what he wanted to find? The Norwegian explorer Roald Amundsen called Stefansson’s claim one of the most ridiculous ever to have come out of the Arctic.

Rasmussen was well aware of Stefansson’s theory of the blonde Eskimos, but found no evidence to support it in his time among the Inuinnait. He debunked the theory, stating that “all the anthropological measurements taken do not indicate any new infiltration in the tribe.”

Stefansson, perhaps in an attempt to salvage his reputation, later complained that the media had embellished his reports and that only about 10 of the thousand or so Inuit he had met were blue-eyed.

But his protestations were disingenuous. He himself had written letters to the museum about the blue-eyed Eskimos, and he had gone so far as to suggest their language resembled Icelandic, a Scandinavian language.

There is absolutely no basis for such a suggestion, except for the stubborn desire of Stefansson to believe it.

Icelanders wanted to believe Stefansson was correct. Even within the last few decades, Icelandic anthropologists carried out a study, with the co-operation of the Inuit of the Central Arctic, called the Inuit Genetic History Project.

It proved the Inuinnait are not descended from the lost Greenland colony, and that should put to rest Stefansson’s quaint and self-serving theory.

The man had deluded himself and seen what he desperately wanted to see, and what no other credible observer saw. In the process — not coincidentally — he had gained fame.

It would not be the last time that Vilhjalmur Stefansson sought self-aggrandizement and hoodwinked the world.