Two homeless Inuit women were fatally struck by cars in the past month. Meanwhile, the city is at risk of seeing a surge in homelessness due to the pandemic. 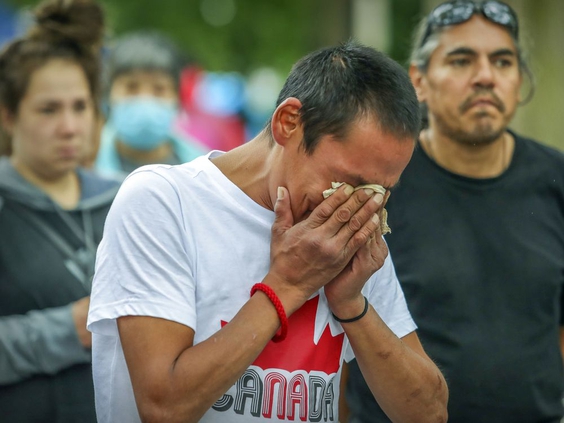 Putulik Qumak cries at a memorial Wednesday in Cabot Square for Kitty Kakkinerk and Dinah Matte. The Inuit women died after being hit by cars in separate incidents. JOHN MAHONEY / Montreal Gazette

Kitty Kakkinerk’s hand trembled as she held up a picture of her brother Lucassie.

Someone found Lucassie’s blanket and backpack unattended in the snow-crusted alley he slept in most nights, and he hadn’t been seen in days. Kakkinerk feared the worst.

So she made the rounds with a crumpled photo of her brother, fighting back tears as she asked street workers, cops and strangers if they had seen him. By the fourth day, after a relentless search led by Kakkinerk, Lucassie was found safe and sound.

That was in February 2019 and — for a moment — Kakkinerk could allow herself to feel relief in the struggle of street life.

Kakkinerk was fatally struck by a car on Parc Ave. last week. Lucassie witnessed his sister’s death. He couldn’t bring himself to speak at her memorial, held Wednesday in Cabot Square.

“Kitty was my fierce defender,” said Sarah Carriere, a community caseworker with the First Peoples Justice Centre. “I may not look Inuk, but I am … and every time I came around, she would always say, ‘Tell people “Taanaa inuapivut!” ‘ — ‘She’s our fellow Inuk!’ She was so kind and so loving.

“The first time I saw her during COVID, she was one where I said, ‘Screw the (social distancing) rules, I need to hug this one.’ ”

Wednesday’s service also honoured Dinah Matte, a homeless Inuk woman who died after being hit by a car last month near Greene Ave.

Matte came to Montreal from Akulivik, a fishing village on Hudson Bay. Kakkinerk was born in Quaqtaq, a tiny Inuit community in the fjords of Ungava Bay. Both had been on the streets for years.

“Their lives mattered,” said Nakuset, executive director of the Native Women’s Shelter of Montreal. “Shelters that usually help these women are closing earlier because of COVID-19. Both these women died after the shelters were closed. This could have been prevented.”

Safety measures to curtail the pandemic have forced the city to cut back some services to the homeless and drastically rethink others. Emergency shelters were set up at the Bonsecours Market, in a downtown arena, at the YMCA and a hotel near the city centre last winter.

Meanwhile, the city put workers in parks including Place Émilie-Gamelin and Cabot Square to deliver food and basic medical care.

But with the number of infected receding, emergency shelters are closing. Nakuset says there may not be enough warm beds to accommodate a homeless population that appears to be surging.

The site of the old Royal Victoria Hospital is offering emergency shelter to 63 people now and plans on offering space to another 50 by next week. Welcome Hall Mission executive director Sam Watts, who is spearheading the program, says he’s trying to transition clients to their own apartments.

But Watts is worried that the economic devastation wrought by COVID-19 will create a trickle-down effect that pushes more and more people to the brink of homelessness.

“If the economy doesn’t pick up, we might see a lot of working people end up in the danger zone,” Watts said. “Right now, our free grocery store is serving people who used to work in hotels, bars and restaurants. They can’t afford food. I am scared of what’s next.”

The Welcome Hall Mission had been offering free groceries to about 3,500 people each week before the pandemic; according to Watts, there have been 1,100 new clients since then.

Nakuset says the Indigenous homeless population tended to by shelters like Resilience Montreal and the Open Door is underserved by the traditional shelter system. Many wind up sleeping in camps under the highway, by the Canadian Pacific railroad tracks near downtown and in tents across the city. 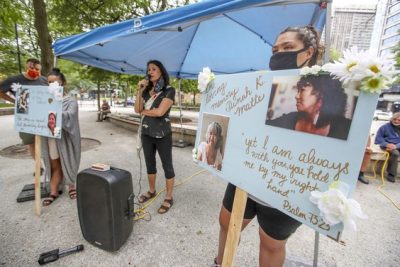 Nakuset, executive director of the Native Women’s Shelter of Montreal, speaks at Wednesday’s memorial for Kitty Kakkinerk and Dinah Matte. “Shelters that usually help these women are closing earlier because of COVID-19. Both these women died after the shelters were closed. This could have been prevented.” JOHN MAHONEY/Montreal Gazette

It also took months for emergency federal aid money to funnel its way from Ottawa to Quebec to homeless organizations, according to Old Brewery Mission executive director Matthew Pearce.

The net effect, according to Nakuset, is a strategy that’s inadequate for the city’s most vulnerable people.

“We need wet shelters, a place where people can go overnight if they’ve been drinking,” she said. “Because right now, people are slipping through the cracks.”

The provincial government was set to announce the site it chose for Montreal’s first wet shelter in April, but COVID-19 torpedoed those plans. Instead, those who struggle with addiction are largely left to fend for themselves, according to three intervention workers who spoke to the Montreal Gazette.

Matte and Kakkinerk had become fixtures on downtown streets, nearly 2,000 kilometres south of the wide open, vibrant landscape of northern Quebec. Many flee their homeland because housing is chronically underfunded, because there are few social services available to those trying to get out of domestic violence, or simply because there’s little economic opportunity in Nunavik.

One woman said she has had to wait years for a dangerous man to be put in jail before she can go north again. For many, the problems back home linger as new ones develop in the south.

In an interview with the Montreal Gazette last year, Kakkinerk said she had been in the city for so long that she lost her beneficiary status because of a controversial clause in the James Bay and Northern Quebec Agreement.

This story is republished with permission from the Montreal Gazette.