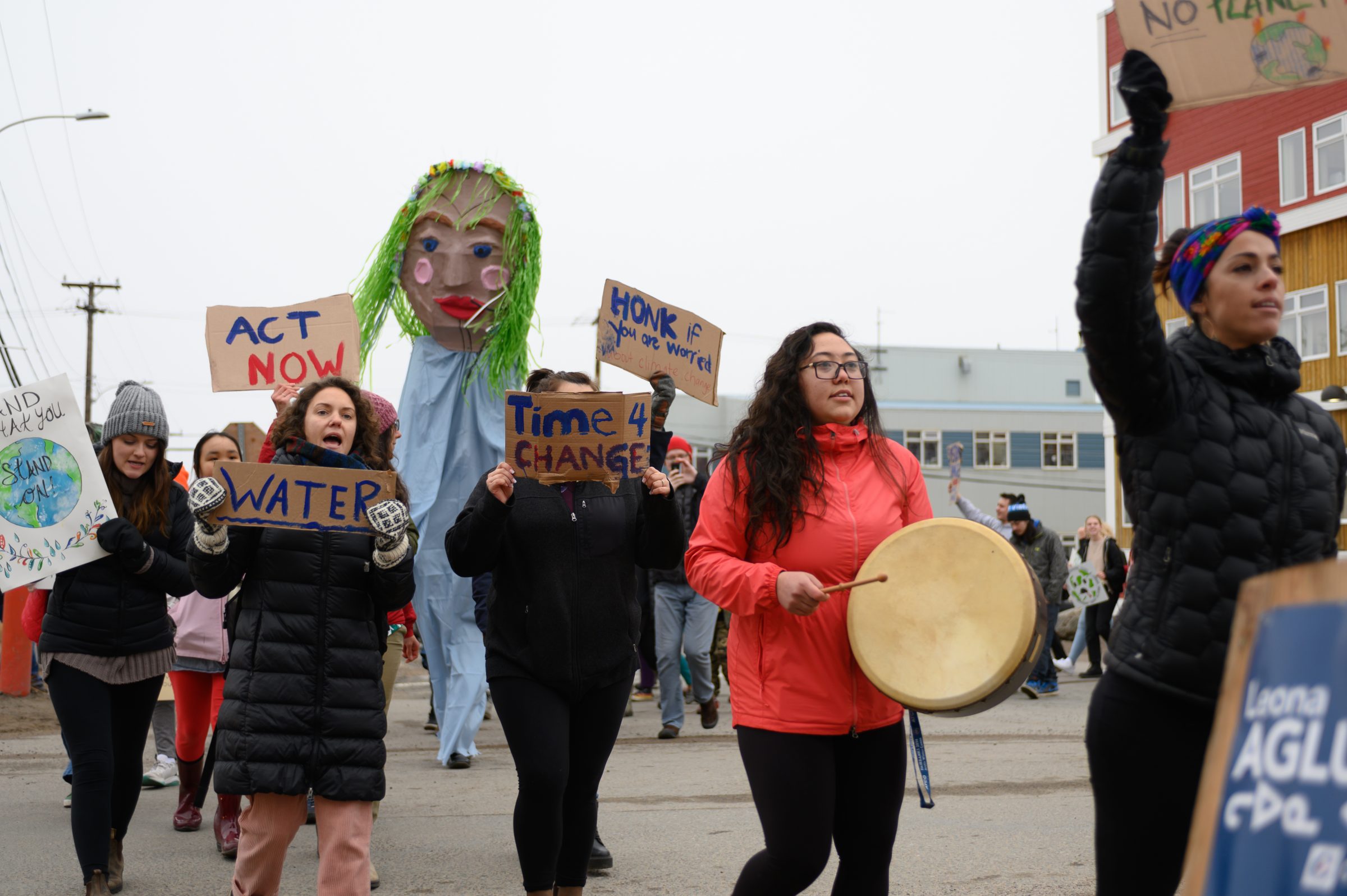 Students march across the Four Corners intersection in Iqaluit on Sept. 27 as part of a global climate strike demanding change. Three parties in the upcoming federal election are promising to end Nunavut’s reliance on diesel to produce electricity by 2030. (Photo by Dustin Patar)

This federal election three parties are vowing to end Nunavut’s reliance on diesel for power by 2030.

Currently, all 25 communities in the territory are powered by stand-alone diesel plants operated by the Qulliq Energy Corporation, the only energy company in the country without any developed local energy resources.

Changing that would be a massive and costly undertaking.

The Green Party’s election platform promises to “implement a major ramp-up of renewable electricity. By 2030, 100 per cent of Canada’s electricity will come from renewable sources. This includes getting remote and northern communities off diesel generators.”

The Liberal Party, meanwhile, says it will be “moving forward with investments that will see all Inuit communities are off diesel and instead powered by clean, renewable and reliable sources of energy—such as hydro, wind, and solar—by 2030.”

And the New Democratic Party says it “will set a target to power Canada with net carbon-free electricity by 2030…. Meeting this carbon-free electricity goal in a way that respects local communities and creates good jobs is essential. We’ll support investments in innovative community-owned and operated clean energy projects to keep jobs and expertise local, and work in partnership with Indigenous and northern communities to move off diesel.”

According to an Environment and Climate Change Canada report released earlier this year, Nunavut’s contribution to the national carbon footprint has always been less than one per cent.

Despite this, Nunavut has seen its greenhouse gas emissions increase by over 30 per cent since 2005, the biggest growth in the country and nearly double that of Alberta, which has the second-largest growth over the same period.

While the switch to renewable energy proposed by the three parties would reverse this growth, the impact it would have on the nation’s carbon footprint would be minuscule.

It’s the communities that would benefit the most.

Nunavummiut pay more for electricity than people anywhere else in the country, and investments into renewable energy could reduce that.

However, the challenge with renewable energy projects is balancing their upfront cost with the pre-existing expense of current power needs.

Last month, the WWF released a report that looked at how viable renewable energy could be in powering each of Nunavut’s 25 communities.

It found that under an eight per cent discount rate—which accounts for the level of risk on a project or other sources of funding—Baker Lake, Coral Harbor, Iqaluit and Rankin Inlet could all save money by transitioning to 20 per cent renewable energy, including upfront costs, over a 15-year period.

The study also identified 16 other communities that with a four per cent discount rate—around what QEC would be able to borrow money for—and approximately $2 million in grant funding, could also make the transition to 20 per cent renewable energy.

But the report just takes a high-level look at the viability of these projects, only suggesting making the transition to renewable energy if it’s cheaper than current energy costs.

Actually transitioning the viable communities to renewable energy would require a considerable amount of work.

“There’s a lot of consultation that would have to happen, and it would probably need to start in the next year if they’re going to hit those targets for every single community,” said Lenio.

“You would have to go to the community, work out what they would like to do, what the community vision for energy is, find out what other local priorities are and what areas around the community are important for traditional uses like harvesting and wildlife.”

That doesn’t include setting up data collection equipment for solar or wind, a process that can take two years for adequate data, or any work with the QEC to ensure that the renewable energy could connect to and integrate with their system.

Transitioning all communities to 100 per cent renewable energy, as all three parties call for, would not only require a considerable time investment but a significant financial one as well.

While the NDP and Liberals have yet to announce what their financial commitment to the transition would be, the Green Party did so last week.

Included in their platform-costing report, the party pledged $150 million over the next five years to transitioning all remote and northern communities—not just those in Nunavut—away from diesel.

Lenio points out that for a community like Arctic Bay to transition even 60 per cent of their power to renewable energy, there would need to be a capital expenditure of at least $27.8 million.

According to the same report, for other communities to achieve even a 60 per cent reliance on renewable energy, the initial expenditures are even higher.

While this represents a significant reduction from the $250-500-million price tag attached to the hydroelectric project once considered by the city, it would use all Green Party allocated funds on one community.

Lenio doesn’t expect the federal government to fully pay for these projects, but added that finding project partners and ways to leverage the work also takes time.

Given the 2030 deadline, time is in short supply.

“For solar, I’d say the two- to five-year range. For wind energy, you’re looking more at like the five- to seven-year range,” said Lenio when asked how long renewable energy projects can take.

When these timelines are multiplied by more than 25 communities and intended to happen at roughly the same time across vast, remote areas with seasonal access, Lenio wonders how it would get done.

In spite of those challenges, she’s optimistic.

“Hopefully with these ambitious targets, it will result in some positive changes. Even if we don’t make it 100 per cent of the way there, it’s good to have that ambition.”

Note: This article references the federal election campaign platforms of the Green Party, the Liberal Party and the NDP. At the time of publication, the Conservative Party had yet to officially release their platform and, thus, was not included in the story.