Issues such as housing, health, elder care, local economies and education will be prioritized 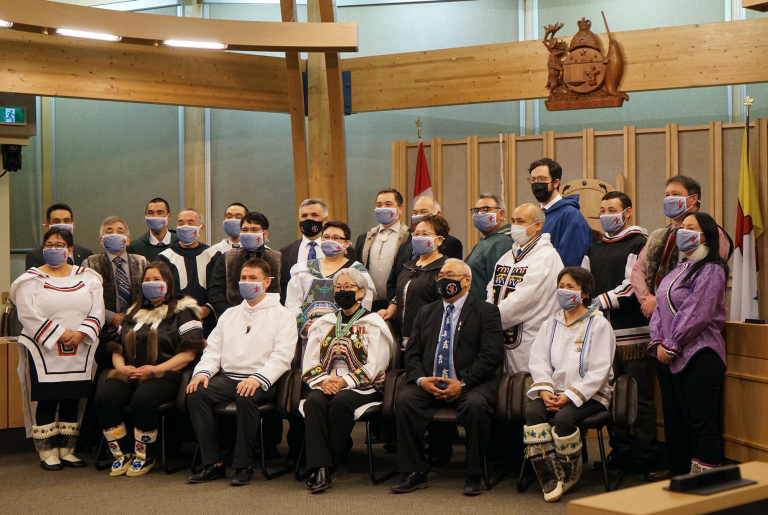 Nunavut MLAs, pictured here during their swearing-in ceremony last November, will return to the legislative assembly’s chamber Wednesday for the start of what’s scheduled to be the longest sitting of the year. (File photo by Mélanie Ritchot)

Working together and inclusivity were two of the main themes when both the throne speech was delivered and in the Government of Nunavut mandate for the Sixth Legislative Assembly of Nunavut that was released on Tuesday.

In delivering the throne speech, Commissioner Eva Aariak said this will be the Katujjiluta mandate, with Katujjiluta meaning “a commitment to work in unity to manifest the courageous dream.”

In his statement in the mandate letter, Premier P.J. Akeeagok said this mandate will be unique because it was planned with Nunavut Tunngavik Inc., and the territory’s three regional Inuit organizations: Qikiqtani Inuit Association, Kivalliq Inuit Association and the Kitikmeot Inuit Association.

A throne speech and mandate letter are formal statements at the beginning of a legislative session that spell out the government’s agenda and the priorities MLAs want to work on during the coming session. The legislative assembly’s winter sitting, which began two weeks ago, is the first real opportunity Nunavut legislators have had to get down to business since last October’s election.

Through that consensus, the government outlined in both the mandate and the throne speech five priorities: expanding housing, aging with dignity, health and healing, reinvesting in education and diversifying Nunavut’s local economies.

One of the largest commitments made in the government’s priorities is toward housing, where its goal is to build at least 1,000 units. Currently, Nunavut is in need of more than 3,000 units according to a GN report. The Nunavut Housing Corporation has published that more than half of Nunavummiut live in social housing.

Elder care is a challenge the government will need to continue addressing in its priority, aging with dignity. The government is providing commitments such as hastening the speed of construction of long-term care facilities in Nunavut, community-based programs for elder care and giving elders better access to country food.

These commitments come as a petition to bring elders home who are receiving down South was acknowledged by the GN. Recently, elder advocacy group Pairijiit Tigummiaqtikkut forwarded a letter of complaint to the Minister of Health about the level of care being received by Inuit elders in Ottawa.

For its health and healing priority, the government stated commitments such as expanding programming for mental health, creating trauma informed practices in healthcare and education, as well as including elders in community health programming. Shortly after the new legislature was elected last fall, over 100 youths and their supporters marched and blocked Iqaluit’s busiest intersection to demand more government action to address youth suicide in Nunavut.

For diversifying local economies, the government committed to measures such as increasing training for sectors such as mining, arts and crafts, tourism and small business.