To Point Barrow and then Nome 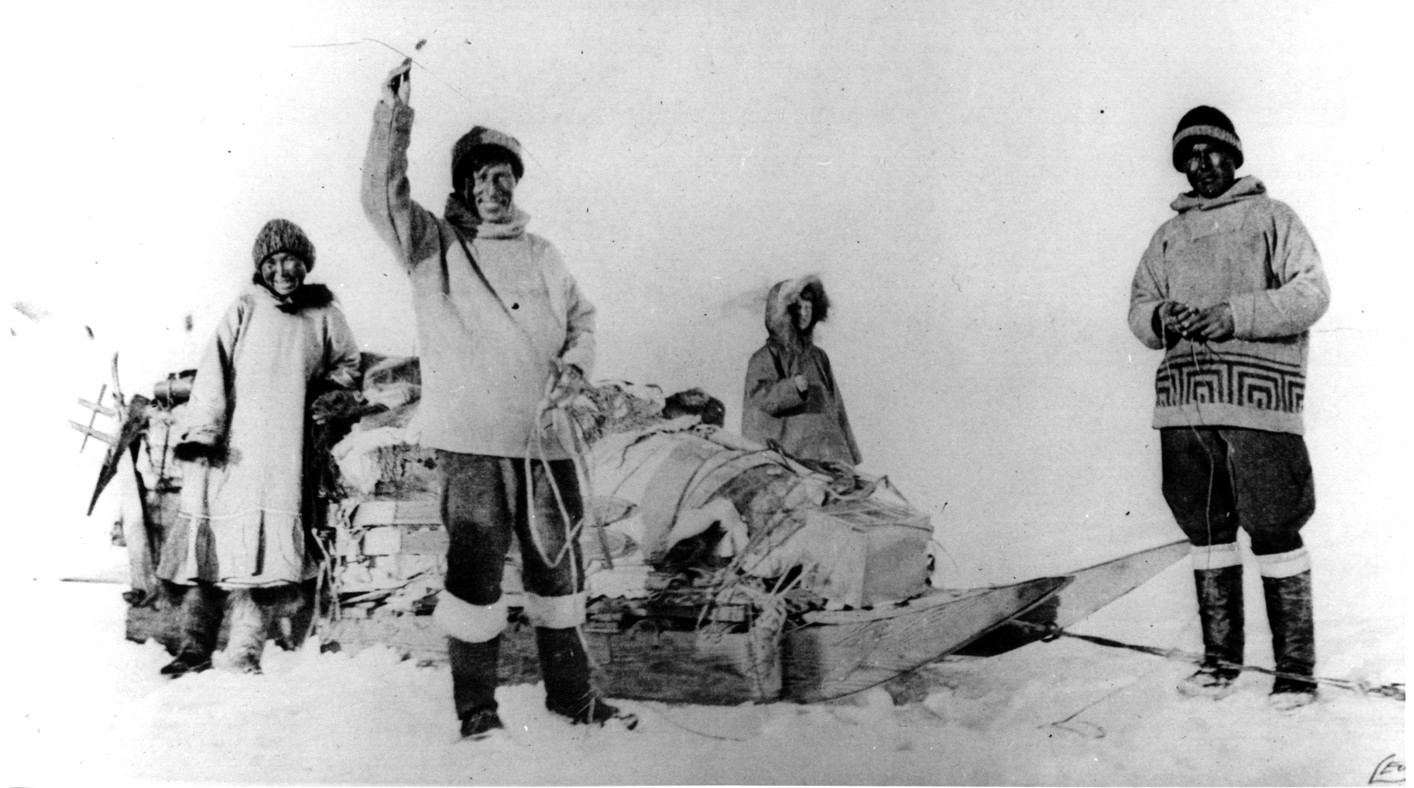 Knud Rasmussen left Herschel Island on May 5, 1924, by dogsled, bound for Point Barrow, Alaska. His party consisted of three other travellers: Qaavigarsuaq, Arnarulunnguaq, and the Danish filmmaker and photographer Leo Hansen, who had joined the expedition in the central Canadian Arctic.

They reached Point Barrow on May 23, after a journey of about 800 kilometres. It was the most northerly settlement in Alaska and the largest town Rasmussen and the Inughuit had seen since leaving Godthaab close to three years earlier.

It had a school and a hospital; about 250 Inuit and a few white people called it home.

One of those white people was Charles Brower, an influential trader who eventually wrote a best-selling book about his own life in the Arctic, with the captivating title, Fifty Years Below Zero.

Brower — known to outsiders as the “King of the Arctic” — proved of great assistance to Rasmussen, whose time was limited, by directing him to the best storytellers.

Rasmussen had initially thought there would be little to learn from Inuit living in such close proximity to non-Inuit culture, with its school and other amenities.

He quickly realized he was wrong. As his posthumous notes make clear, “New perspectives opened up, especially in folklore and mythology.”

The trading and mission buildings at Point Barrow were at Cape Smith, and the community is today known as Utqiaġvik, or the place where one hunts owls.

It was a busy time of year in Point Barrow, the bowhead whaling season. The point was on the annual migration route for this large Arctic whale, the prey of traditional hunting by Inuit before it attracted Qallunaat, or non-Inuit, whalers to the Arctic.

Now, with whaling by Qallunaat a thing of the past, it remained a regular part of Inuit life. As Rasmussen pointed out, it had always allowed for “a period of cultural florescence in this region.”

After a much too short visit, Rasmussen and the two Inughuit left Point Barrow on June 3, leaving Leo Hansen behind to film the whalers’ festivities. He would travel later by ship with the expedition’s collections of artifacts, and rejoin them in Nome.

Rasmussen’s party passed Wainwright and reached Icy Cape on June 8. A whale had just been taken there, and for two days the visitors were present for a grand feast held to celebrate the occasion.

It was a more or less traditional hunt by Inuit, supplemented with useful technology they had garnered from the earlier presence of American commercial whalers.

The Inuit feasted and held drum dances far into the night. Rasmussen was in his glory. He remained there as long as he could, collecting folklore.

By June 30, though, he had to move on. This marked the end of his epic sled journey in which he logged about 6,000 kilometres of travel from Danish Island in 15 months.

Summer was advancing. They would have to continue their journey by boat. Rasmussen gave all but four of his dogs to Ugpersaun, an Inuit trader at Icy Point who took him and his companions on a three-day journey by skin boat to Point Lay, where he turned back.

At the Inuit settlement there, Rasmussen hired another boat to take them two more days west. From there, the ice was close to the shore and so they walked westward along the coast, wading many swift rivers along the way.

After six days they reached Pitmigiaq, where they met Inuit reindeer herders. They hired yet another boat, this one small and unsound, to take them to Point Hope, which they reached on July 16.

It was a large settlement, which Rasmussen called the “ancient centre of Alaska’s whaling.” It had once been even larger, inhabited by the powerful and feared Tikerarmiut.

There he found 122 Inuit house ruins — more than he had seen anywhere else — and a large number of graves. He acquired a large collection of artifacts, which the Inuit were happy to dig up and sell to him. And he met an old man, Qalajaoq, who provided him with more folklore.

Rasmussen recorded a myth about the origin of Point Hope:

“In the days long past there was no low land in front of the mountains, and the people lived on the top of the big Mount Irrisugssuk, southeast of Kotzebue Sound.

“This was the only land that rose out of the sea, and on the top there are still whale bones and whale skeletons from the first people’s hunting. It was at the time when the people still went about on their hands with their heads downwards — it is that long ago.

“But one day wise Raven — the same who made the sky and the earth — was paddling out at sea in his kayak, far out at sea, and on the water he saw something dark moving and rippling. He paddled up and harpooned it, and blood flowed from the wound.

“Raven thought it was a whale, but then saw it was an enormous mass without beginning or end. Slowly the life ebbed out of it, and he made his towing-line fast and towed it in to the mountains to the south of Uivfaq.

“There he moored it, and next day when he examined it he found it rigid: it had become land, To this day there is a hole in the ground at the settlement, the place where Raven harpooned Tikitaq.

“That is how Point Hope was made.”

They left Point Hope on July 31 by a small boat with an outboard motor, and sailed past Cape Thompson, where they visited more reindeer herders, including Elektuna, the first Inuk to own tame reindeer. When Rasmussen met him, he had a herd of 800.

Finally, on Aug. 7 they reached Kotzebue, a town of about 1,000 people at the time, from where Rasmussen was able to send a telegram to his committee in Denmark announcing the success of his expedition.

He made a quick trip to the “model settlement” of Noorvik, built by the Department of Education, and took a profound dislike to the Quaker missionaries he met there and elsewhere. But he was accompanied by an old man, Nasuk, who regaled him with local folklore.

On Aug. 22, they left Kotzebue by the mail boat Silver Wave, and reached Nome on the last day of the month after a stormy voyage.

Leo Hansen left Point Barrow on the schooner Teddy Bear and reached Nome four days after his compatriots did.