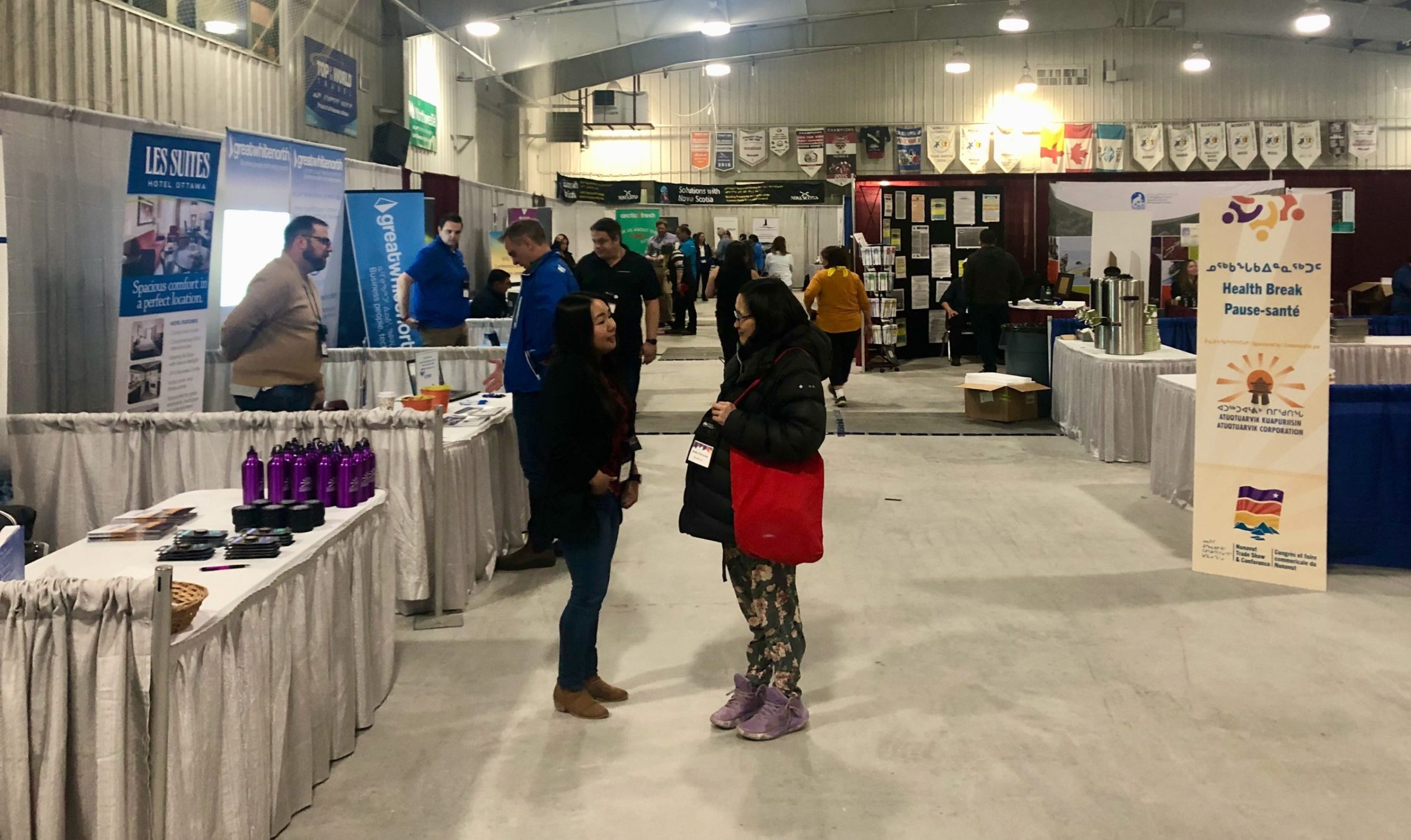 The Nunavut Trade Show in Iqaluit is being held in person for the first time since the pandemic started. (Photo by David Lochead)

The importance of tourism and the arts in Nunavut — and how to build them up — was the discussion to kick off the Nunavut Trade Show on Wednesday.

“There is so much opportunity out there for tourism providers,” said Travel Nunavut CEO Kevin Kelly.

The two-day Nunavut Trade Show and Conference opened at the Arctic Winter Games arena and Aqsarniit Hotel. This is the first time since the start of the pandemic in spring 2020 that it has been held in person. Trade booths on the floor include different Government of Nunavut departments, Inuit organizations such as Makigiaqta, and private-sector businesses like Canadian North.

In a room off from the trade show floor, speakers including Kelly, Thor Simonsen of the Nunavut record label Hitmakerz and Kathleen Nicholls from the Government of Nunavut discussed infrastructure needed to elevate tourism and the arts in the territory.

When it comes to an economic recovery from COVID-19, tourism matters, Kelly said.

The industry provides 1,500 full-time and part-time jobs across Nunavut, so ensuring it recovers from the effects of the pandemic and continues to grow is vital.

To emphasize the impact COVID-19 had on it, Kelly pointed to Government of Nunavut information that showed in 2020 there were approximately 359,000 passenger movements, or people flying either into or within Nunavut.

That sharp decline would have affected everything from hotel operators to retailers, food sellers and charter operators.

For the industry to recover, Kelly said, travel has to be made easy.

He used the example of having credit card processing available for tourists willing to spend money on art.

“What we need to do as an industry and as a territory is to help our artists get that [credit card] technology,” Kelly said.

Setting up bank accounts, for example, is a task that should be simple — except for Nunavut artists it isn’t, because some communities lack good internet access.

“We want to give these opportunities to people who don’t have them,” Simonsen said of creating jobs in the music business.

“We want to bridge that gap.”

Nicholls, an adviser to the GN on tourism and cultural industries, said there is also incredible value in the artwork created in Nunavut.

With approximately 7,800 artists in the territory, Nunavut has more artists per capita than anywhere in Canada, she said.

Nicholls said 10 per cent of the Canadian art that is sold internationally comes from Nunavut artists — which is extraordinary considering the territory’s population is only one-tenth of one per cent of Canada’s entire population.

“If we don’t take care of our artists, we don’t have anything to monetize,” she said.

As one example, she said artists need to be able to take their work to market and sell it for a satisfactory price.

Administrative support for tasks such as processing payments, applying for grants or setting up a website, is also critical in helping artists, Nicholls said.

The trade show continues Thursday when the trade show floor at the arena is open to the public from 10 a.m. to 4 p.m.