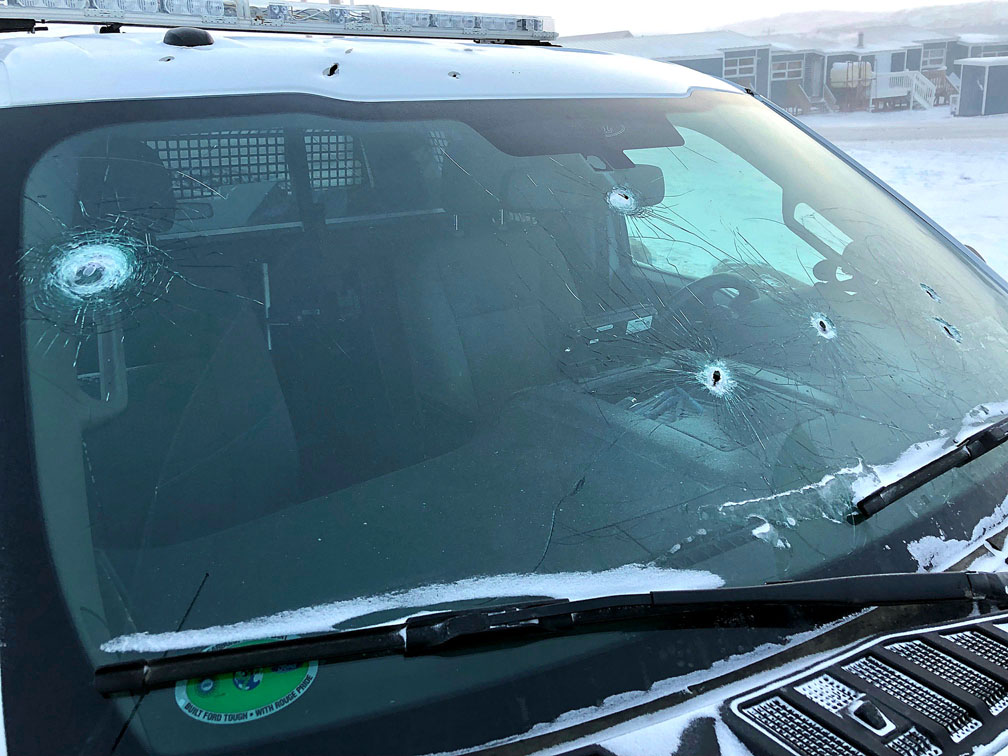 This RCMP vehicle was riddled with bullet holes after a dangerous shooting incident in Iqaluit on Dec. 22, 2018. Because of exposure to multiple violent incidents like this, traumatized Mounties seek mental health care but often can’t get their supervisors to authorize it, a recent lawsuit alleges. (RCMP handout photo)

Four traumatized RCMP members exposed to extreme violence while serving in Nunavut have filed a lawsuit with the Federal Court of Canada alleging their employer failed to provide them with adequate mental health care and subjected them to abusive and discriminatory treatment for seeking such care.

Their statement of claim, filed on Sept. 16, makes numerous disturbing allegations that suggest the Nunavut RCMP suffers from a deeply dysfunctional workplace culture.

The four police officers, three of whom now live in Nova Scotia, allege that when Mounties seek help for on-the-job stress injuries, their supervisors resist and often refuse such requests.

And the lawsuit alleges that even when traumatized Mounties are allowed to receive mental health care, upon their return they suffer treatment from supervisors that makes their existing mental health problems even worse.

Much of the trauma the members suffered appears to be related to multiple violent incidents in Nunavut, although plaintiffs were also exposed to traumatizing incidents in other remote locations, such as Labrador and northern Manitoba.

The four plaintiffs have asked the Federal Court to certify the lawsuit as a class action.

If the court agrees, that means all Mounties diagnosed with an operational stress injury could be eligible for compensation should the legal action succeed.

The statement of claim, in addition to damage awards, seeks adequate funding to design, implement, operate and administer mental health services for class members, and support services for their families.

One of the four Mounties, Cpl. Garrett Moore, was sent to Nunavut in 2012 after graduating from a six-month training program in Regina.

“During his first years as a Mountie, Cpl. Moore was frequently exposed to scenes of violence, danger, and tragedy while posted in a remote, northern region,” the statement of claim says.

But the RCMP in Nunavut didn’t offer any mental health services.

After that, Moore left Nunavut to serve in Sherwood Park, Alta. In 2017, a medical examination found that he was at marked risk for mental health issues.

The RCMP sent Moore back to Nunavut anyway. There, his mental health deteriorated, but when he sought help, the RCMP wouldn’t accommodate him.

“He experienced discrimination and belittling comments from superiors and peers simply because he sought medical help,” the statement of claim alleges.

In December 2018, Moore was ordered to respond to an active shooter incident in which Mounties were shot at for several hours.

The statement of claim doesn’t say where that incident occurred.

But on Dec. 22, 2018, in what RCMP described at that time as an “active shooter incident,” two men in the Happy Valley neighbourhood of Iqaluit fired rifle rounds at police for hours on a dark mid-winter night.

Only three days earlier, at another residence, an Iqaluit man had held three children hostage for 12 hours before RCMP crisis negotiators convinced him to give up.

After the Mounties involved asked for a medical debriefing, senior officers in Nunavut took note of which RCMP members sought help.

“Those who did [seek help] were treated and taunted as insufficiently masculine and resilient for a successful career and advancement opportunities,” the statement of claim alleges.

After that experience, Moore was diagnosed in Ottawa with post-traumatic stress disorder. He alleges that RCMP officials then tried to force him to quit by offering him a medical discharge.

“His PTSD symptoms were met with opposition, derogatory comments, and recommendations that he simply leave the force,” the statement of claim alleges.

Another plaintiff, Const. Kelly McQuade, had managed her own mental health while serving in the south in 2010, when she sought treatment from a psychologist.

But in 2017, when she was transferred to Nunavut, she was “shocked” to learn that RCMP members in remote locations get virtually no access to mental health services.

After experiencing a string of traumatic events in her first year in Nunavut, she alleges she sought basic mental health support, but was met with “denials and hostility” from her supervisors.

“In the face of constant opposition, Const. McQuade did not stop asking for mental health services,” the statement of claim alleges.

As a result of that, she says a supervisor told her that she was “blackballed” and that any request she made would be rejected.

“She is currently on long-term medical leave for PTSD and does not know when she will be able to return to work,” the statement of claim said.

Staff-Sgt. David Combden, a 25-year veteran of the force, alleges he experienced the same kind of callous treatment from senior RCMP staff, after postings in multiple remote isolated communities, including Nunavut, where “he was subjected to both extreme violence and a toxic, discriminatory workplace culture.”

Combden says he lived with untreated PTSD symptoms for years and continues to live with those symptoms “exacerbated by years of suffering alone and in silence.”

Const. Graham Walsh, another plaintiff, says he already suffered from untreated PTSD when he was posted to Iqaluit in 2016.

“He continued to witness scenes of violence on a regular basis, but no mental health services were offered,” the statement of claim alleges.

He participated in responding to an active shooter incident in 2018 and was diagnosed with PTSD in the spring of 2019.

When he returned, he overheard “senior officers, supervisors and peers openly mocking Mounties with operational stress injuries, indicating that they were insufficiently tough to do their jobs,” the statement of claim alleges.

The allegations have yet to be proven in court. The online records of the Federal Court of Canada’s Halifax office show the attorney general of Canada, the RCMP’s legal representative, has yet to file a statement of defence.

By coincidence, Nunavut Finance Minister George Hickes, at a committee of the whole meeting on Sept. 24, told MLAs that an average of 11 Nunavut RCMP members were on long-term disability in 2019-20, up from an average of only 1.25 officers in 2012-13.

And it’s the Government of Nunavut that must pay the related costs, he said,

“When somebody from the RCMP does go on long-term disability, we are still continuing to pay for that in addition to paying for the replacement officer,” he said.