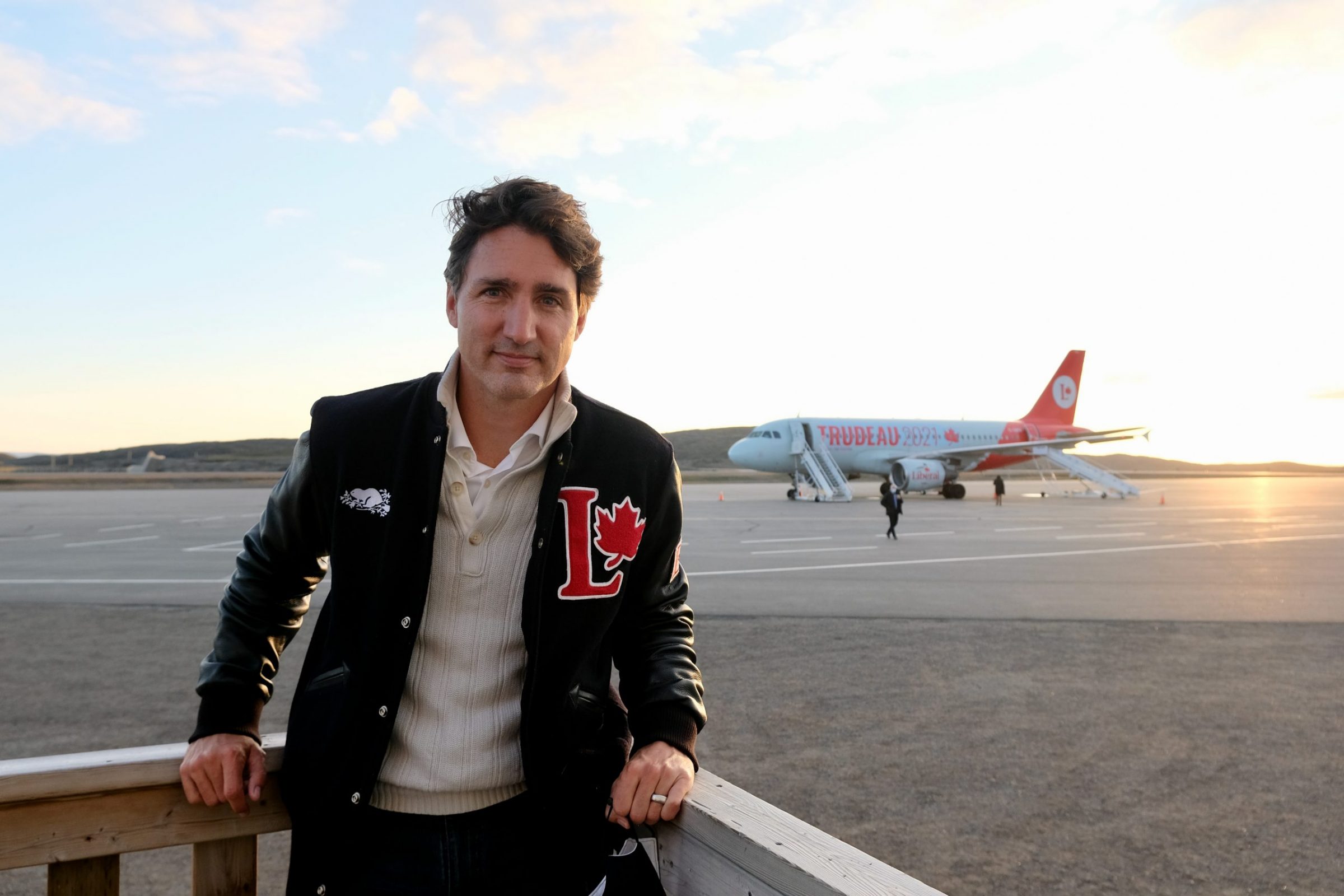 Liberal Leader Justin Trudeau sat down with Nunatsiaq News Monday in Iqaluit to talk about his party’s promise to provide $360 million over four years for housing across Inuit Nunangat and other election commitments. (Photo by Mélanie Ritchot)

Touching down in Iqaluit for about four hours before heading back to Ottawa, Prime Minister Justin Trudeau had enough time to pledge $360 million for housing across Inuit Nunangat if he’s re-elected.

The funds would come over four years but be “heavily front-loaded” in the first year, Trudeau said in an interview after a campaign stop to support Nunavut Liberal candidate Pat Angnakak.

“We’re going to try and maximize what we can do in the next construction season.”

Trudeau is the first party leader to visit the territory since the election — slated for Sept. 20 — was called, and said he regrets being able to stop in for only a few hours.

“I love this part of the world so much that being able to come even for a few hours is better than nothing,” he said.

While the New Democratic Party and the Conservatives released their election platforms weeks ago, Trudeau said his will be presented in the coming days and will include announcements specifically for Inuit.

Before boarding his Liberal party-branded plane waiting on the runway, Trudeau met with Nunatsiaq News at the Iqaluit airport to talk about his other plans for Inuit Nunangat.

Nunatsiaq News: Your housing plan focuses on helping Canadians become homeowners but there aren’t many homes to buy in the North. How will you get Inuit housed?

Justin Trudeau: There will be help for renters [too], but what we put in our platform is a specific fund for municipalities as incentives for them, cutting through some of the red tape and slowdowns. I know how incredibly expensive it is and how short the building season is in Nunavut, so we have to make sure we are maximizing all the incentives to build.

NN: Your plan includes ending plastic pollution and cutting waste with a goal to recycle 90 per cent of plastic bottles by 2029. How can this be done in Nunavut without infrastructure to recycle plastic?

NN: Can northerners expect to be able to recycle plastic in the next few years?

Trudeau: That’ll be part of it. But that’s why we’ve given ourselves a few years to work with industry and municipalities on different ways of doing it so we can get to that goal.

NN: In 2019 you pledged to get all Indigenous communities off diesel by 2030. Is this still the plan for Nunavut and Nunavik?

NN: You plan to reduce childcare costs to $10 per day, but how will you fix long waitlists and understaffed daycares in the North?

Trudeau: The $10 per day [cost] is a piece of the plan. But, you’ll see as we sign [agreements] with different jurisdictions, there will be commitments about how many spaces get opened up and how we’re going to make sure there’s proper pay for the early childhood educators. We don’t send the money to the provinces or territories unless the plan includes making more spaces and supporting the educators properly. Nunavut will be very different in its approach, but I’m working with the premier on how to solve this challenge.

NN: Has one of these agreements been signed with the Government of Nunavut?

Trudeau: No, not yet. It is in the works, but the needs are particular here, so we need to make sure we get it right.

NN: The NDP and Conservatives’ plans include reforming Nutrition North. What’s your plan to make food more affordable in the North?

Trudeau: That was probably one of the biggest things I’ve heard today and every time I come up North. A number of years ago when the Conservatives made changes to the program, it ended up giving more money to the retailers that were supposed to be passed along to [buyers].

NN: How will you reform Nutrition North?

Trudeau: First of all, making sure we’re responding to the very real concerns that people have, that they’re not getting the savings passed onto them. Natan Obed [the president of Inuit Tapiriit Kanatami] was talking a lot about the need to look at graduated levels or means-testing to make sure the most support goes to those who are most vulnerable. That’s something we’re interested in looking at, but food is expensive for everyone in the North and we have to make sure [the prices are] coming down.

NN: In your time as prime minister, would you say your government has improved the federal government’s relationship with Inuit?

Trudeau: We absolutely have improved our relationship with Inuit, but there’s always lots more to do.

NN: What do you think your government has failed to deliver for Inuit?

Trudeau: It’s very clear there are still outstanding needs in housing. There’s [also a need for] more support for health care — people having to fly south to have their babies is just not right. I’m really excited to take the lessons learned [from the COVID-19 pandemic] and apply them to help the other crises. We’re facing a crisis of reconciliation, climate change, housing, childcare and so many different things.

Portions of this interview were edited and condensed for clarity.