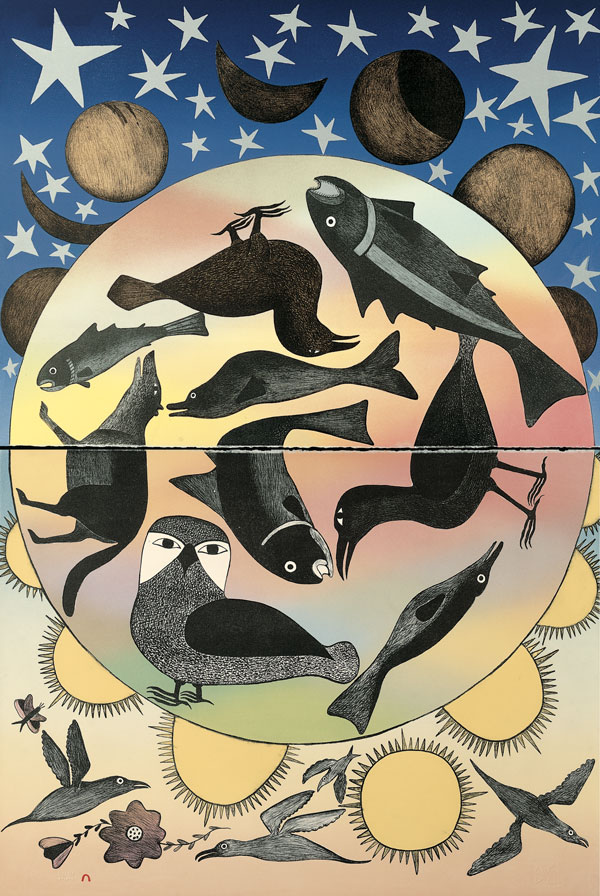 Kenojuak Ashevak celebrated the birth of the new territory with “Siilavut, Nunavut” or “Our Environment, Our Land.” A spectacular lithograph showing a globe of finely rendered Arctic animals surrounded by setting moons and rising suns, Ashevak’s print reminds us that the animals, the land and the environment hadn’t changed, only the way they would be governed: now by an Inuit leadership recognized by the federal government.

The twenty years since Nunavut was founded have been creative ones for artists in the territory. Elder artists Elisapee Ishulutaq, Janet Kigusiuq and Kananginak Pootoogook each made thoughtful work that explored and recorded traditional life in media that included oil stick, tissue paper collage and coloured-pencil drawings. Long-established carvers Bart Hanna, Billy Kuksuk, Maudie Okkituq, Nuna Parr, Uriash Puqiqnak, Nick Sikkuark and countless others created impressive works that now circulate far and wide outside the territory.

Jimmy Iqulaq, Jamasee Pitseolak and Oviloo Tunnillie are artists who recorded difficult, deeply personal experiences in stone. Though widely known for carvings of elegant loons, detailed motorcycles and graceful female figures respectively, Iqaluq has also made deeply moving carvings depicting the sled dog slaughter by the RCMP; Pitseolak has made work about abuse suffered at a day school in Cape Dorset; and Tunnillie recalled traumatic experiences during tuberculosis treatment in the south. Increasingly, artists use their work as a form of healing and a platform to bring attention to the many injustices faced by Inuit.

Alongside her, a new generation of artists has created provocative, often large-scale, drawings. Shuvinai Ashoona with her monstrous creatures and playing cards, Tim Pitsiulak’s shamanic transformations and high-realist hunting scenes, Itee Pootoogook’s cool landscapes and quiet interiors, Ningiukulu Teevee’s raven tricksters and smoking Sednas, and Jutai Toonoo’s self-portraits and drawings of cancerous cells proved that anything could be the subject of Inuit art as long as an Inuk made it.

Some of the most important work that has been done in Nunavut since 1999 has been the product of collaboration. In 2001 “Atanarjuat: The Fast Runner,” the first feature film written, directed and acted entirely by Inuit in Inuktitut was released by Isuma Productions. Directed by Zacharias Kunuk, the film, a retelling of a tale passed down through oral history, was the recipient of the Caméra d’Or at the Cannes Film Festival in France in 2001. In the years that followed, Isuma have continued to push the boundaries of what Indigenous cinema can be by making honest, thought-provoking works that place Inuit culture, language and resilience in the spotlight.

Collaborative artworks have been used to mark important moments in Nunavut and southern Canada. In 2013, a massive public sculpture commissioned by Nunavut Tunngavik Inc. was unveiled in Iqaluit to celebrate the 20-year anniversary of the Nunavut Land Claims Agreement. Sculpted by Inuk Charlie, Paul Malliki and Looty Pijamini, the fourteen-foot monument in Iqaluit includes many important symbols of Inuit culture and resilience. It is a sculpture for Inuit, by Inuit.

In 2010, Kawtysie Kakee, Olassie Akulukjuk, Anna Etuangat, Leesee Kakee and Kathy Battye from Pangnirtung wove an enormous tapestry designed by Andrew Qappik, with contributing artists from other regions in Inuit Nunangat. Commissioned by Inuit Tapiriit Kanatami for the Vancouver Olympics, “Achieving a Dream” is a ten-foot-wide, six-foot tall tapestry depicting both traditional Inuit games and modern competitive sports in a rainbow of warm, bold colours.

On a more intimate scale, artists working at the Matchbox Gallery in Rankin Inlet have created incredible, multi-authored ceramics. Sawdust-fired in oil drums outside the studio, the ceramics were made by artists Roger Aksadjuak, Pierre Aupilardjuk, John Kurok and Leo Napayok, who passed around in-progress works to have studio-mates add, change and experiment. 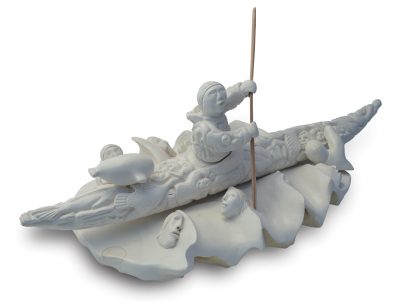 Collaborative Ceramic by Pierre Aupilardjuk and Leo ­Napayok. (Photo courtesy of the Art Gallery of Burlington)

The spirit of collective artmaking is not new to communities in Nunavut. It has been essential to printmaking activities in Baker Lake, Cape Dorset, Pangnirtung and beyond since the first printmaking experiments started over 60 years ago. In fact, Kenojuak Ashevak isn’t the only artist at work in “Siilavut, Nunavut.” Pitseolak Niviaqsi, a talented artist in his own right, translated a drawing made by Ashevak into the final print. Using her drawing as a guide, he recreated it on a litho stone and selected the brilliant colours of ink used to make the image, including the warm golden hue that fills each of Ashevak’s seven suns.

As the sun now rises over Nunavut, 20 years since it was first recognized as a territory, it rises over a new generation of artists that make dynamic, personal artwork that resonates far beyond their homeland. Artists like Alethea Arnaquq-Baril, Adina Tarralik Duffy, Niore Iqalukjuak, Damien Iquallaq, Ruben Komangapik, Megan Kyak-Monteith, Jesse Tungilik, Padloo Samayualie and countless others, supported by an incredibly rich history of Inuit artistic production, will continue to excite, enchant and educate through the art they make long into the future.

John Geoghegan is the senior editor at Inuit Art Quarterly. A passionate writer and researcher with an interest in art made in Canada, he calls Toronto home.