Ten projects competing for cash prizes up to $1 million 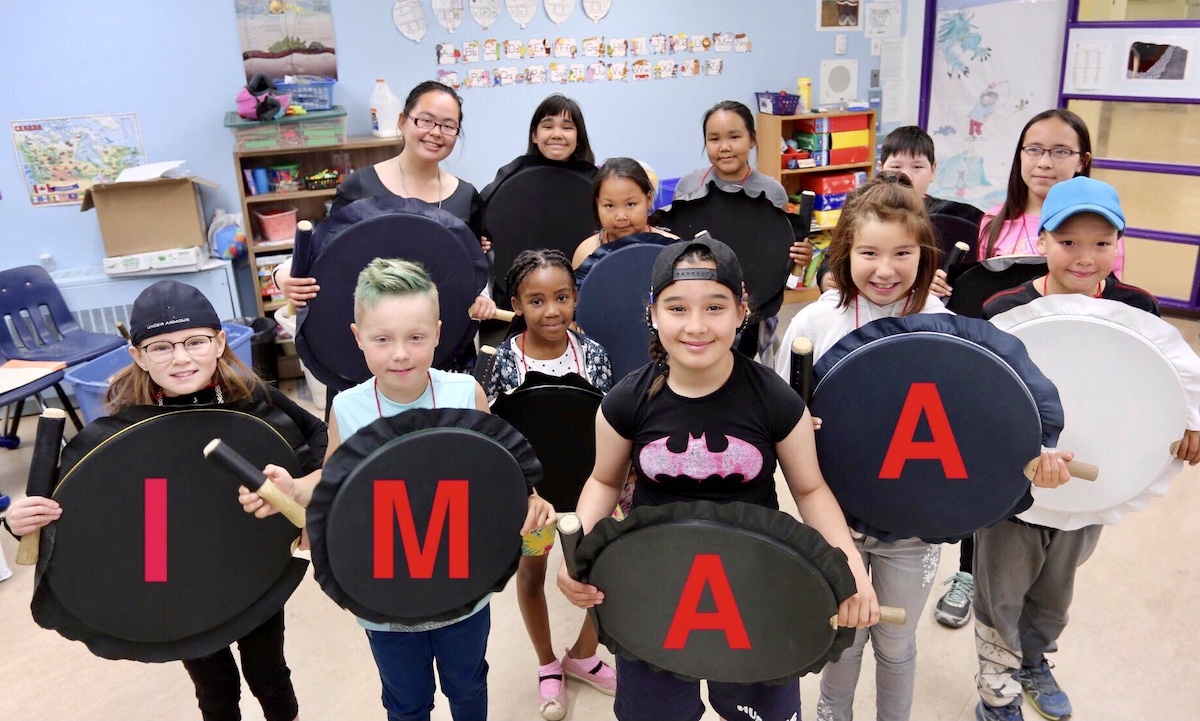 Molly Ell, drum dance instructor and Iqaluit Music Society camp alumna, is seen with her students in this pre-pandemic photo taken at the 2019 summer music camp. (Photo by Mathew Nuqingaq)

This year’s finalists for the Arctic Inspiration Prize have been announced, with a project based in Iqaluit in the running for the $1 million prize and another in in Taloyoak up for $500,000.

From a new virtual hub for Indigenous women and girls in the Yukon, to increased access to hearing care in Nunavik, the projects “by the North, for the North” aim to make an impact in Northern communities for generations to come.

Nunavut’s two contenders, announced Nov. 20, are a music-based program in Iqaluit and a food sovereignty project in Taloyoak.

“Imaa, Like this,” the project by the Iqaluit Music Society, up for $1 million, aims to get more music programming in schools and teach Inuit children traditional music, including throat singing and drum dancing. The project proposal also includes training new music instructors, which would create employment opportunities for musicians across Nunavut.

“I don’t know where I would be if I didn’t have music in my life,” said Naiome Eegeesiak, who attended the society’s summer music camps as a child and is now a volunteer fiddle and accordion teacher.

Darlene Nuqingaq, volunteer president of the Iqaluit Music Society and Eegeesiak’s former music teacher, said there’s a need to expand the program outside of Iqaluit.

“It’s just a wonderful opportunity to dream,” she said about the prize money.

Many schools across Nunavut don’t have music teachers or music programs in their curriculum, said Nuqingaq.

With the prize money, the society’s current after-school music program could become a “centre of excellence,” serving all of Nunavut. Children could learn traditional music and youth could be trained as music teachers, said Nuqingaq.

“Music has been shown to enhance literacy and numeracy achievement,” she said. “It enhances academics.”

In its current programming, children as young as six years of age learn throat singing and drum dancing, then move on to the fiddle by Grade 3.

“It’s really showing us what the potential could be because the kids are learning so much so fast,” she said.

Nunavut’s second finalist is a food sovereignty project based in Taloyoak, in the running for a $500,000 prize.

Jimmy Oleekatalik, the manager of Spence Bay Hunters and Trappers Organization, is the project’s team leader. He says he’s been thinking about the idea of a new food facility that could employ people and provide healthy food for his community since 2006.

“We’re not farmers, we’re hunters and gatherers, we live off the land and this is a way for us to take our traditional lifestyle back.”

The new facility could include an after-school program for youth to do their homework and eat a healthy dinner. “It’s very hard to think with an empty stomach,” he said.

Oleekatalik also said he envisions a meat cutting and wrapping facility where hunters could earn income and elders could teach young hunters how to skin caribou or musk oxen, and how to hunt safely and sustainably.

“For a small community with few jobs available, country food is what we need,” he said.

Nunavik’s Isuarsivik Regional Recovery Centre is another contender for the $1 million prize. It’s pitching a project that it says “would bring together elders, addiction counsellors, hunters, scholars and community members to create a marriage of best practices in the field of addiction and Inuit traditional knowledge regarding individual and collective wellness.”

Nunavik’s school board, Kativik Ilisarniliriniq, has a project in the $500,000 category, for a project that would educate residents about hearing loss and provide access to hearing care. “It also hopes to address the root causes of hearing loss by focusing on hearing loss prevention,” according to its submission.