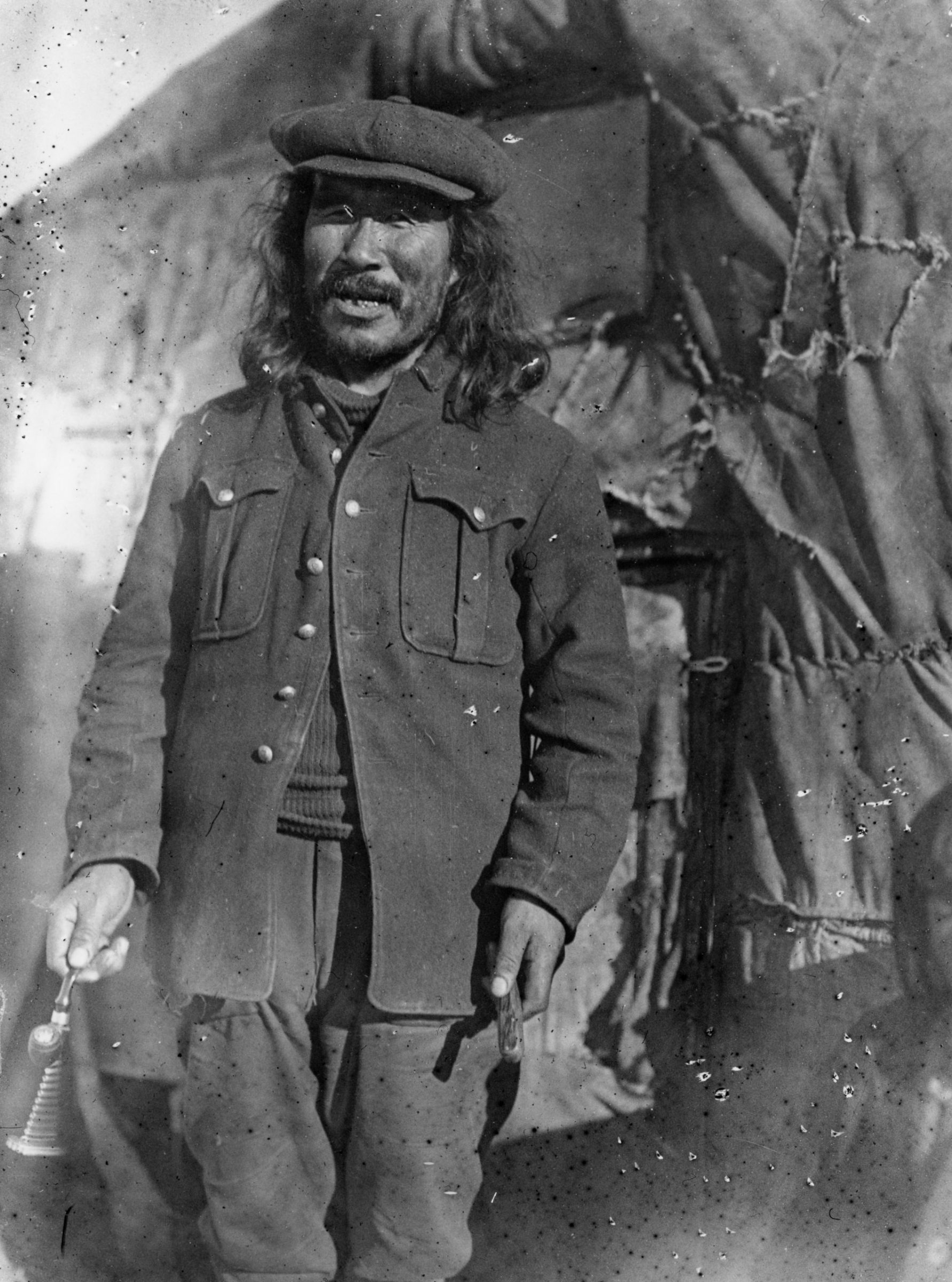 The prophet Umik, who introduced Christianity to the Inuit of Iglulik and the Melville Peninsula, photographed by Therkel Mathiassen. (Photo courtesy of the National Museum of Denmark, Ethnographic Department, #826)

Therkel Mathiassen and Peter Freuchen were the first men of the Fifth Thule Expedition to observe the physical manifestations of the Inuit conversion to Christianity on Melville Peninsula.

Umik, accompanied by his son Nuqallaq, had brought his peculiar version of Christianity from north Baffin in the early spring of 1922. Mathiassen described him as an “elderly, intelligent man” who “ruled [Iglulik] absolutely.”

The two Danes observed the hand-shaking, the hymn-singing, and the white flags on poles outside snow houses, signifying that the residents were Christian. Mathiassen noted that Umik’s religion included “abstention from work on Sundays, gathering now and then in his snow house and singing hymns which he had taught them, and, what is more, the hunters were to bring their booty to him and he would distribute it.”

The hand-shaking extended even to shaking the paws of the dogs in a newly arrived traveller’s team. An indication of the close relationship between Inuit and man’s best friend is that the dogs also wore crucifixes carved from wood!

But neither Dane, nor Knud Rasmussen himself — who never met either Umik or Nuqallaq — wrote about the beliefs that Umik promulgated or the ritual of conversion. This is a peculiar omission for an expedition, the main goal of which was ethnography. The Inuit were adept at keeping the conversion ritual away from the prying eyes of outsiders. Akumalik and his followers had been similarly successful in Pond Inlet.

Adoption of the new religion freed Inuit from the observance of a multitude of taboos, many of which had become meaningless and counter-productive.

Freuchen described the effects of adherence to the taboos: “At first they were very strict in abiding by their ancient pagan rules. This made it difficult as we needed a great deal of help, and the women could not sew caribou skins while the sun was on the decline. When they were pregnant they could not eat out of the same pot as the men, and had so many rules that life was extremely difficult for them.”

The conversion ritual was called siqqitirniq. It was a blatant rejection of certain behaviours that had been taboo and the eager acceptance of opposite behaviours. Many taboos had centred around food, and siqqitirniq focused on this.

“They cut the seal open and took out the intestines, the liver, the heart, the eyes, and the tongue and cut them into small pieces…. Every one of us was given a piece of meat,” recalled elder Rachel Uyarasuk, many decades later.

“We did this because all those parts of the seal, the heart, and the intestine were all parts of the pittailiniq, the taboos. They were no longer to be observed. There wouldn’t be any part of the seal that people would have to abstain from eating. This was not just the case for seal, but for all other animals as well.”

For some, conversion was controversial. Tagornaaq remarked of Aua’s daughter, who had recently given birth, that “Aapaq has become a Christian for her food.”

Siqqitirniq freed Inuit from one oppressive set of arbitrary taboos while binding them to another set of beliefs, most notable of which was the prohibition of work, including hunting, on every seventh day. The siqqitirniq ritual was practised in the Pond Inlet area, at Iglulik and the Melville Peninsula, and as far south as Repulse Bay.

When Rasmussen spent his first lengthy period of time with the shaman Aua at his camp at Itibleriaq, the old man was recognized as an angakkuq and adhered to the old beliefs. This meant that there were many things he would not discuss with the ethnologist.

“A faithful spirit conjuror,” realized Rasmussen, “cannot disclose the secrets of his life without weakening his relationship to the supernatural.”

But by the time Rasmussen visited him again for an extended period a year later, Aua had converted and was much more forthcoming.

Umik had looked forward to the conversion of Aua as a particular challenge. But it seems that when the old man finally decided to convert, in the fall of 1922, Umik played no direct part in it. Rasmussen wrote that Aua “met some families of the Aivilik tribe during his residence at Repulse Bay who held prayer meetings in an igloo.”

Elsewhere, Mathiassen wrote that Aua forsook his old beliefs and converted “after his eldest son [Nataq] had dreamt that it was the true faith.”

New beliefs required another new word to be added to the Inuit vocabulary. Those who had taken part in siqqitirniq and become Christians were now referred to as majulajuit — loosely glossed as those who want to go to heaven; the singular form is majulajuq.

Rasmussen uses the word sparingly, in a plural Greenlandic spelling, as majulasut, and glosses it as “they who crawl upward, as indicating that they had already relinquished their foothold upon Earth, and sought only to find release from the existence to which they were born.”

Jacob Olsen, in his Greenlandic publication about the expedition, uses the word majulassunik — the nominative plural form would be majulasut. These are variants of majuaqtuq (in some dialects, majurartuq), a word generally glossed as “climb.”

In fact, it signifies movement from a lower to a higher place. In that sense, it can be seen in opposition to siqqitirtuq (the verbal form of siqqitirniq), which signified a transition from a higher to a lower surface, perhaps a humbling of oneself before God. It’s opposite, majulajuq, signified the rising up toward heaven that followed.

The rapid demise of Umik’s religion that Mathiassen had predicted did not come to pass. Rather, it survived and eventually transformed itself into more conventional Christianity.