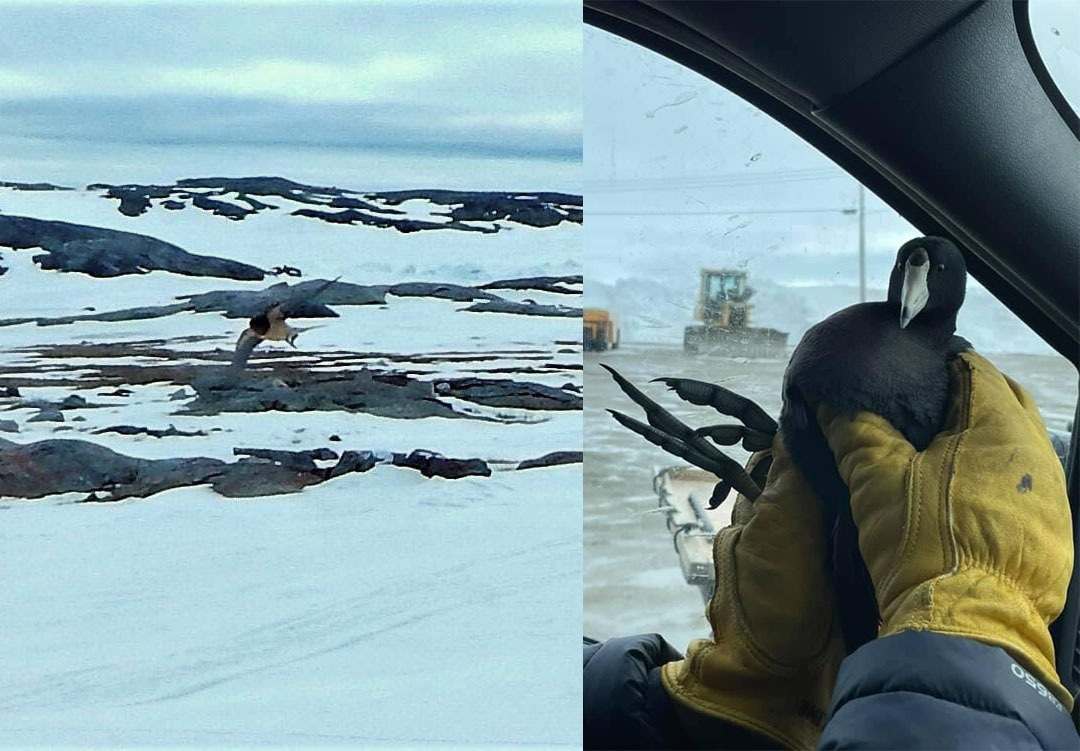 Left: a barn swallow is seen in a photo by Billy Adjuk. Right: Jay Kungpow took this photo of an American coot in Chesterfield Inlet.

Residents of Nunavut’s western Hudson Bay coast have been treated to some unusual bird sightings recently.

This week Bill Adjuk of Whale Cove spotted a barn swallow, a long-haul migratory bird, which is rare in Nunavut.

At first, Adjuk said he had no idea what kind of a bird it was.

He said he identified the bird by taking a photo and sending it to a friend who is familiar with that type of bird.

“It was feeding on flies around some houses and apartments,” he said, adding that “every year we are seeing different kinds of animals and birds these days.”

Those birds include blue jays, he said.

In Chesterfield Inlet on Tuesday, Jay Kungpow spotted a very odd looking bird near the water which a friend identified as an American coot.

It’s small, with a white beak, black body and lobed toes, described by the Cornell Lab of Ornithology as a plump, chicken-like bird.

Noel Junior of Rankin Inlet said it looked “cool,” like “a king eider combined with a raven,” after seeing Kungpow’s posting of the American coot photo online.

Other commenters said the birds had also been spotted in Kugluktuk and Kinngait.

It’s not the first time an American coot has recently been photographed in Nunavut. One was spotted in Igloolik in October 2017.

The recent unusual sightings don’t surprise Jean-Pierre Savard, a bird specialist who currently sits on the Nunavut Wildlife Management Board.

“What’s happened with these birds coming at the same time is that they may have been carried by strong winds from their intended area. It’s a well-known phenomenon in birds,” he said.

“They migrate very often at high altitudes. If there are storms or bad weather, some of them can be blown off course further north than they expected.”

There have been several observations of barn swallows even ending up in the High Arctic, Savard said.

If barn swallows find good conditions in a place like Whale Cove, that they could establish a small population, he said.

“But it’s not guaranteed. Most of the time they don’t survive there,” Savard said.

Barn swallows would not, in any case, spend the winter in Nunavut because they migrate to southern tip South America every year.

“But they could come back. They could get imprinted to the area: in some ways migration is genetically programmed but that’s how populations expand,” Savard said.

However, America coots are not good flyers, he said, so Chesterfield Inlet’s American coot likely was blown off course.

As for sightings of blue jays, these are unusual to see on the western coast of Hudson Bay.

“It could be a small sign of the warming up of the temperature,” Savard said.

Or sometimes when there is a big population boom that can lead to a dispersal of birds, he said.