170 individuals used the Uquutaq shelter in 2018 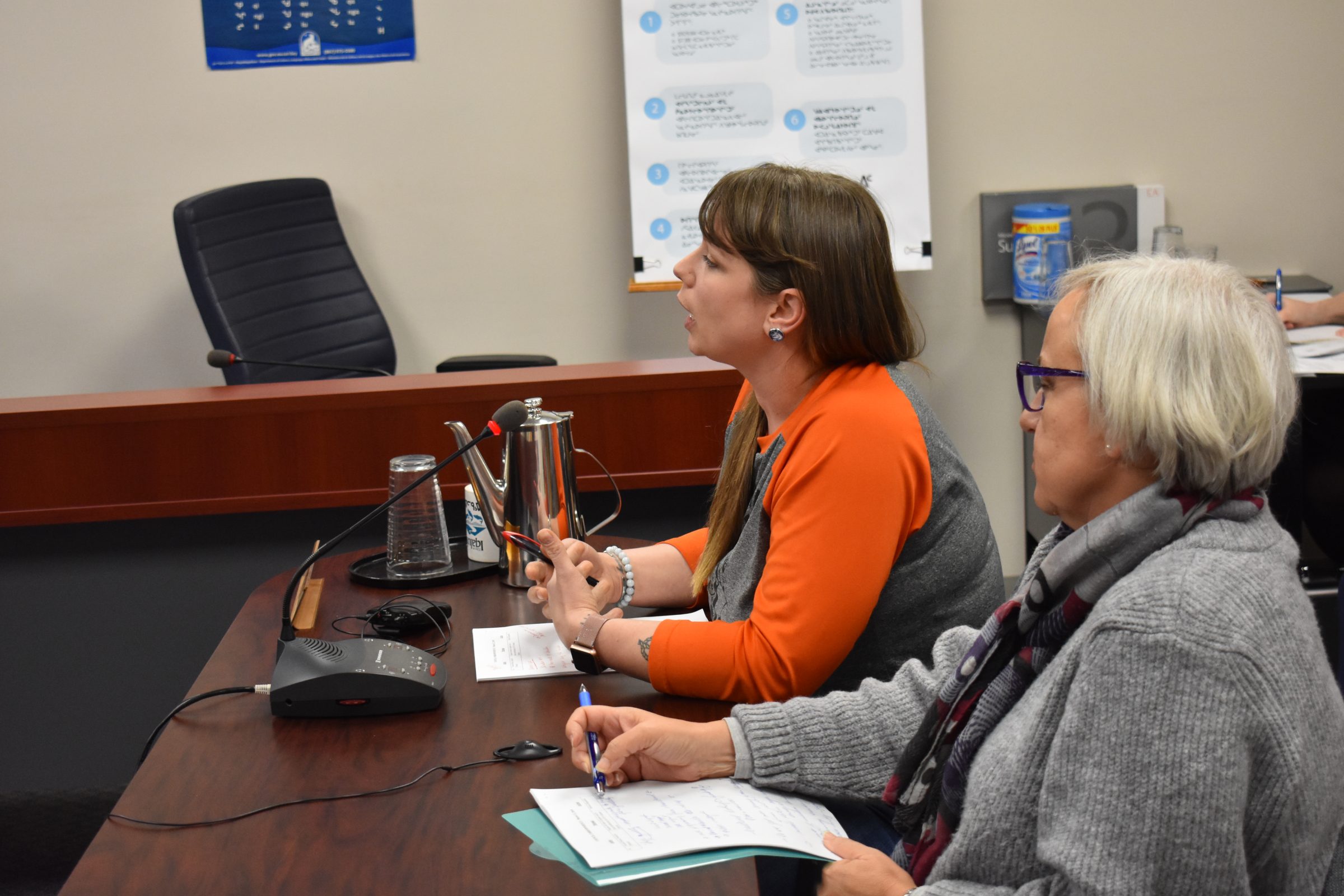 Stephanie Clark, the chair of the Uquutaq Society, and the society’s new executive director, Laurel McCorriston, gave an update to city council on Tuesday, March 12, on the men’s shelter and transitional housing project. (Photo by Courtney Edgar)

A three-bedroom house has been providing shelter to 42 men a night in Iqaluit this year.

Iqaluit’s Uquutaq Society, which manages the city’s men’s shelter, has operated for years in a building rated for a capacity of 20 men, while regularly serving 40 to 50 men each night.

Stephanie Clark, Uquutaq’s chair, gave an update on the shelter and its planned transitional “hub” at a city council meeting on Tuesday, March 12.

Uquutaq is hoping that the location and opening date of the transitional housing project—which could allow some more space for beds and programming—will be clear by the end of this fiscal year.

Clark said Uquutaq is still working on obtaining the space for the project to be housed in.

“We’re currently finalizing negotiations with a vendor to secure a couple of properties and we are also finalizing our applications and approvals with our funder or our potential funder, CMHC,” Clark said.

The society has been planning the hub over the last 20 months.

It would focus more on multi-stage housing and programming supports to help reintegrate the men who frequent the shelter back into the community.

The idea is for there to be more case management, as well as more social support and development for clients.

“The facility is not adequate. It’s not an institutional facility and so we are finding that we’re constantly trying to keep up with repairs,” Clark said of the shelter’s existing building.

There are 32 actual beds, 18 foam mats and several couches for the men to sleep on.

So far this winter, there are “upwards of 50 men” who spend the night at the shelter, said Clark.

As well, Clark said the shelter saw 170 different clients over the course of the year.

“We’re operating on a budget of around a million dollars, so it’s fairly shoe-string at this point,” Clark said.

While the men at the shelter have been doing on-the-land programming through Polar Outfitting and have received some counselling through the Nunavummi Disabilities Makinnasuaqtiit Association, Clark said she wants the shelter to offer more services.

“We are moving into a more program-specific focus in this coming fiscal year,” she said.

Additionally, the society plans to gather feedback from the men who stay at the shelter to learn what other programming the men want or need.

“One of the things we’d like to do going forward is ask the residents what they would find to be healing,” said Laurel McCorriston, Uquutaq’s new executive director.

“I don’t think it is up to me or up to the shelter manager to necessarily define that for the residents. It should come from them.”

McCorriston started working at Uquutaq last week, and a new manager of operations, Isaac Mensah, started about three weeks ago.

Coun. Kyle Sheppard said he is impressed by the work he has seen the all-volunteer board do over the last year and a half to plan the transitional housing project. And while the situation at the shelter is not ideal right now, it is heading to a better place.

“I don’t think everybody realizes the work that’s gone in from the board that’s in place,” Coun. Kyle Sheppard said.

“Over that time a lot of things happened behind closed doors, out of public view. These are board members who have taken shifts unpaid just to keep the doors open.”