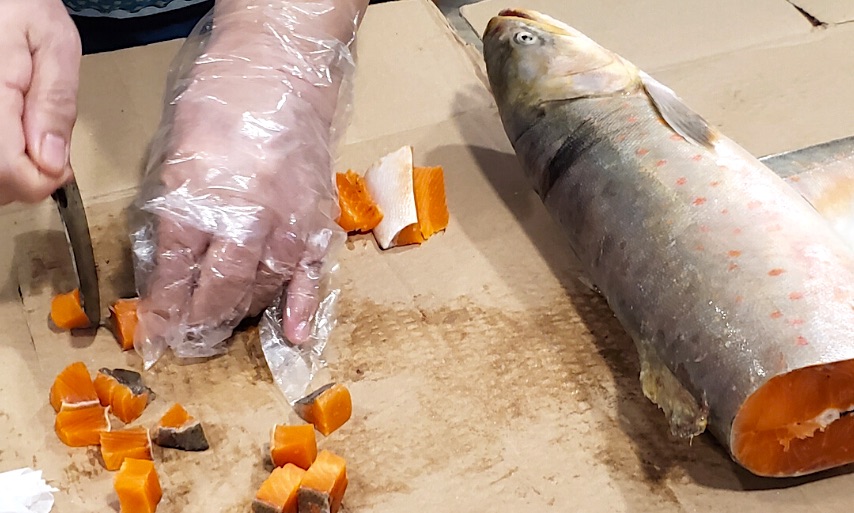 Arctic char is among the various country foods that will be sent to Nunavut Inuit living in urban parts of southern Canada. (Photo courtesy of Tunngasuvvingat Inuit)

About $2.5 million has been earmarked for food security and shelter for Nunavut Inuit in the south in response to the COVID-19 pandemic, Nunavut Tunngavik Inc. said on Monday, June 1.

The money flows from the $75 million provided on May 21 by the federal government for communities and organizations working with Indigenous peoples living in urban areas and off reserve.

“Coronavirus is hardest on those people with weakened immune systems. We want to support the most vulnerable Nunavut Inuit, living outside of Nunavut, to help meet their most basic needs,” said NTI president Aluki Kotierk in a news release.

According to the NTI enrolment list, there are 5,014 Nunavut Inuit residing outside the territory, with the highest numbers living in Ottawa, Yellowknife, Winnipeg, Edmonton and Montreal.

Country food will be harvested in Nunavut, “providing an important economic activity in the territory,” NTI said, and then distributed to organizations serving Nunavut Inuit in urban areas through NTI’s Indigenous Community Support Fund for Nunavut Inuit living outside the Nunavut Settlement Area.

NTI has allocated $505,000 for the harvesting, shipping and distribution of the country food.

“Country food is nutritionally high quality food and is often the preferred food for Inuit. Given the stress of coronavirus, Inuit outside of the Nunavut Settlement Area have also shared with us that country food is important for mental health,” said James Eetoolook, NTI’s vice-president, in a news release.

Similarly, $1 million has been allocated to shelters in urban centres to adapt to health protocols, support physical distancing and purchase personal protective equipment for staff or clients. Of this, $576,000 will go to urban Inuit organizations in Ottawa, Yellowknife, Winnipeg and Edmonton.

Proposals for the balance of both of these funds will be accepted until June 12, NTI said.